The Bears' miserable 13-6 loss to Houston mirrored the weather conditions of the game at Soldier Field. Rain came down the whole evening and it wasn’t just the score that had the fans upset. Quarterback Jay Cutler couldn’t play the second half. 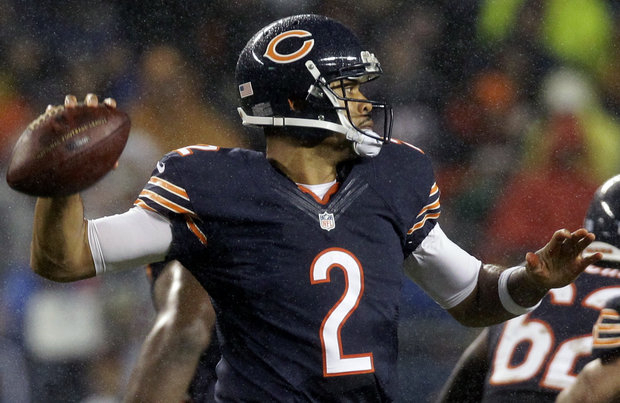 Bears offensive mistakes – two fumbles and two interceptions by Cutler overshadowed two Tim Jennings interceptions in the first half. The Bears cornerback leads the NFL with eight this season. Going into the halftime, the 10-3 lead by Houston wasn't horrible, but the news once the third quarter began gave everyone pause: Cutler suffered from concussion-like symptoms.

Even though the Bears QB had not been sacked he had taken several hits, especially when he scrambled on the run. Houston linebacker Tim Dobbins nailed Cutler late in the second quarter, at one point that seems to be the telling blow to his head. After the game, Coach Lovie Smith wasn’t certain that was the hit the forced Cutler out of the game. “He took a lot of hits, more than he needed to take. No symptoms until the half,” said Smith.

In the third quarter, it was up to the Bears back-up quarterback, Jason Campbell to take the snaps, a tough spot since he had not taken any during the week with the first unit. In the locker room, Cutler told Campbell about his situation, “At halftime, he (Jay) looked at me and told me to be ready. He wasn’t sure of his status, and they were thinking about what was the best decision moving forward.”

In the third quarter, Campbell drove the Bears down to the 4 yard line – highlighted by a 46 yard pass reception to Brandon Marshall. The drive stalled and the Bears settled for a Robbie Gould 24 yard field goal to make it a 10-6. On the Bears next drive in the 4th quarter, Gould missed a 47 yarder that would have drawn them to within a point. The Texans did tack on another field goal to make it a 13-6--which was the final score.

It just felt that there wasn’t enough time or offensive capability by the Bears to provide a comeback. The weather was becoming a factor, as the field was taking a beating with the constant rain and the field was difficult to play on. 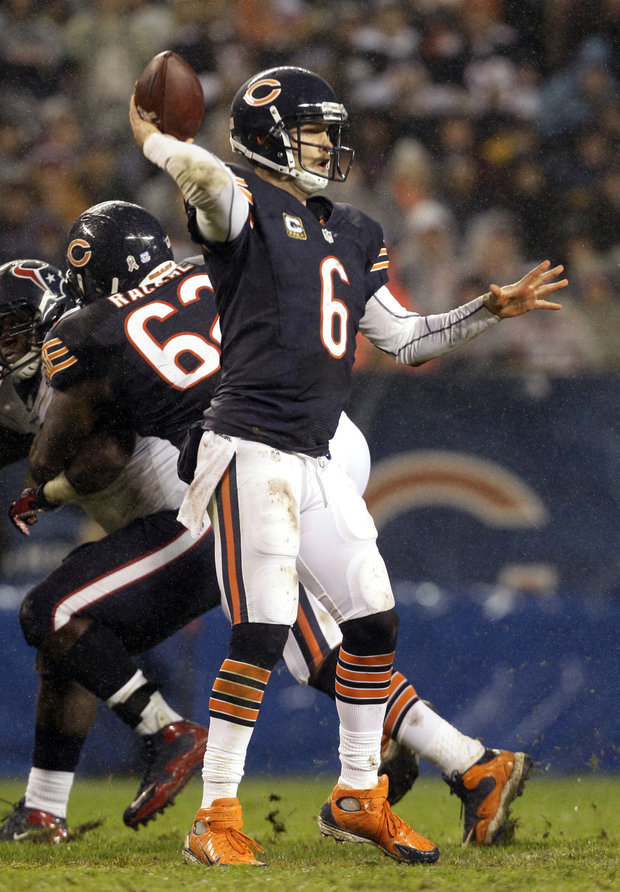 A couple of positives on offense for the Bears, Brandon Marshall continues to put up the big numbers going over a hundred yards (fifth time this year) on eight catches. Ironically, the day Cutler goes out with a head injury there were no sacks on the team’s two quarterbacks.

Defensively, the Bears had their hands full with Houston running back Arian Foster. He had 102 yards-85 in the first half, and a two yard touchdown reception in the second quarter. Texan QB Matt Schaub was held in check, completing 14 of 26 passes for a meager 95 yards with 1 touchdown and two picks.

You really can't fault the Bears defense; they only gave up 13 points-that is usually enough for a team to post a "W".

Houston's defense got a boost from former Bear Daniel Manning, he forced fumbles from Bears tight end Kellen Davis and running back Michael Bush and grabbed a Cutler interception. Sometimes revenge is sweet as he helped the Bears fall to 7 and 2 overall and helped the Texans improved to 8-1.

There were no definitive thoughts on whether Jay Cutler will be available to play next week's game at San Francisco. Lovie Smith did not want to speculate on his status. It is interesting that the 49ers are in the same boat, yesterday they lost their starting quarterback Alex Smith to a concussion in their tie with St. Louis.

Last year when the Bears lost Cutler for the season, the team struggled with his back-ups; the feeling is Campbell is a huge upgrade. If he has to take the reins Campbell should perform better after a week of practices. The former Oakland and Washington quarterback better—that is why they signed him.