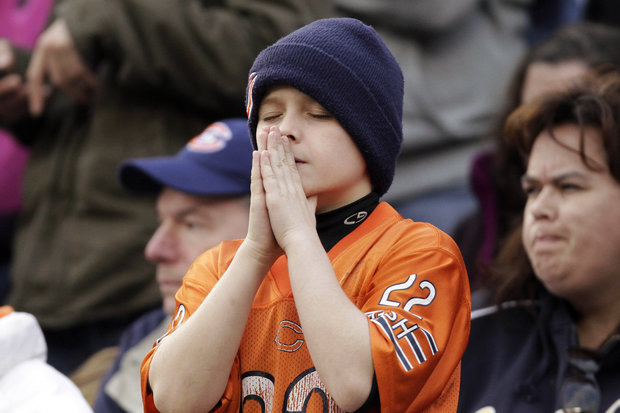 The Bears defense wilted in the final minutes against Seattle Sunday, with Coach Lovie Smith taking the blame for a poor 4th down decision. The offense had some big plays, but didn't control the ball late — the result was a 23-17 overtime loss.

The Bears defense has been the team's strength throughout the season. But Seattle's rookie quarterback Russell Wilson saved his best for last; he drove a go-ahead touchdown late in the 4th quarter and guided the Seahawks to a game winning score to Golden Tate in the OT. Safety Major Wright's huge hit on Tate almost caused a fumble, but after one of many reviews of the game, it was ruled a game winner for Seattle. Wright, as well as the rest of the Bears, was stunned by the dramatic defeat. “We definitely got to come out and play better football,” said Wright. “This is a tough loss to swallow.” The defense looked worn out and suffered more injuries: Tim Jennings hurt his shoulder and Brian Urlacher had a sore hamstring. Another factor for the Bears defense was losing starting safety Chris Conte; he was weakened by the flu during the first half. His absence seemed to open up the running game for Seattle's Marshawn Lynch and Wilson (71 yards rushing).

Point a finger at Lovie Smith (he did)

The advantage should have belonged to the Bears, so when a team loses at home to a club that has only one previous road win, you have to analyze certain game decisions. The big one was early on, when Coach Lovie Smith decided in the second quarter to forgo a short field goal 4th and inches on Seattle’s 15 yard line. Smith trusted a revamped offensive line to get the first down — it didn’t work. After the game the Bears' coach took full responsibility for his decision. "We should have taken the field goal. It felt like we had momentum," Smith said."[I] wanted to really try to knock them out and get them on their heels a little bit."

Did the Bears score enough? Probably.

Jay Cutler got his team on the board early in the first after the defense gave him good field position off a forced fumble by Brian Urlacher. Cutler again found his big player, receiver Brandon Marshall, throwing touchdowns to Earl Bennett and Matt Forte. But Bennett's helicoptered effort to get into the end zone may have been costly. Although he continued to play and dropped what looked like a sure touchdown, Bennett was ruled out during the intermission because of a concussion. Cutler lamented that the offense didn't help the defense enough by not controlling the ball late, which allowed the Seahawks too many opportunities. Cutler and Brandon Marshall deserve huge credit with the amazing 56-yard pass play with seconds left in regulation. “I told Brandon to run as fast as he could down there, and I’ll throw it to you and you make a play. That’s what he did,” said Cutler. That pass completion gave Robbie Gould the opportunity to tie the game with a 31-yard field goal. Marshall finished the game with an incredible 165 reception yards. The problem in overtime the Bears offense never got to touch the ball.

The Bears didn’t win the coin toss to get the ball on offense in the overtime. If the Bears “D” could have held Seattle to a field goal, the Bears would have been given an opportunity to tie or win with a touchdown. Unfortunately, the Bears defense was exhausted and couldn’t stop the Seahawks from getting into the end zone.

The Bears are now 8-4 for the season and fall to second in the NFC North with Green Bay beating Minnesota.  The Packers' earlier win over the Bears gives the tie-breaker to Green Bay. That is why the loss on Sunday was a heart-breaker. Next week the Bears will travel to Minnesota, and every game from now on will have significant importance as the season winds down. There is plenty of work for Lovie Smith and his staff to do to get this tired and banged up team ready for the playoff push.