After a few days glowing after a win, now the Bears have days to sulk over after a 23-10 loss to their divisional rivals the Green Bay Packers.

It was a miserable night for quarterback Jay Cutler; he was battered and frustrated by the play of his offensive line and the Packer defense. 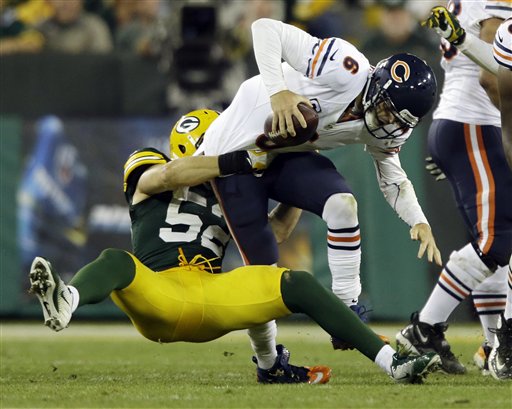 He was sacked seven times; Clay Matthews was involved with four of them. After one of the early sacks from Matthews late in the second quarter, the Bears QB was caught on camera yelling at his left tackle J’Marcus Webb.

Cutler had four interceptions – two to Packers defensive back Tramon Williams. He caught as many passes from Cutler as Bear wide receiver Brandon Marshall.

In fact, Marshall didn’t have any in the first half and a dropped a reception in the endzone.  To add insult to injury, Matt Forte was lost right after the halftime with an ankle injury, he did not return.  Back-up running back Michael Bush had some nice runs, but once the game got out of hand, the running game was not an option.

The Bears shot themselves in the foot a number of times. You can’t have twelve men on the field, as the Bears did on defense. It gave Aaron Rodgers a new set of downs and they capitalized for a field goal to break the scoreless game. The Bears are known for their great special team play and they got burned …bad. The Packers were lined up for another field goal and they pulled off some trickery as the holder flipped the ball to back-up tight end Tom Crabtree for a touchdown. 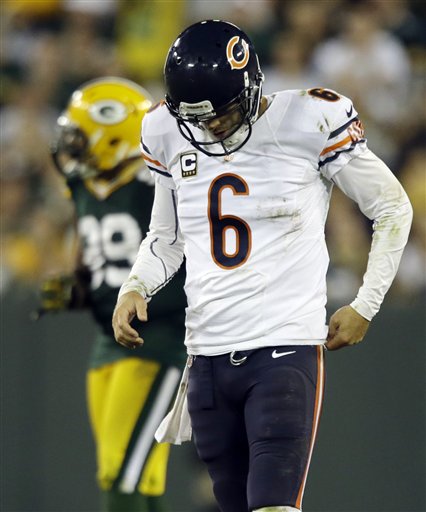 It wasn’t like Rodgers and the Packers offense were tremendous; they just capitalized on some opportunities.  For instance after one of Cutler’s interceptions, Rodgers threw what should have been a Lance Briggs interception and he bobbled and dropped it. It gave the Packers new life and they took advantage and got another Mason Crosby field goal.

There was a Bears former first round pick that actually had a pretty good night but he was wearing a gold and green uniform—Cedric Benson. Last week he could only muster 18 rushing yards against the San Francisco 49ers; against the Bears he had 80 yards on the ground and 35 yards in the air. It seemed he converted for several key first down plays.

You can’t take much stock in the Bears scoring a touchdown on a fourth down pass play from Cutler to tight end Kellen Davis late in the game. The game was out of reach at that point.

There were some nice plays by the Bears defense; they did get to Rodgers for five sacks, including two by Julius Peppers. Tim Jennings had another interception, giving him three in two games. Charles Tillman had a forced fumble and recovery.

It seemed every time the Bears defense would stop the Packers or get a turnover, Cutler and company could not do anything. To only have 74 passing yards and 94 rushing yards indicated this Bear team has to go back to work and figure out which game was the fluke-- game one or game two? Or is this Bear team somewhere in between. 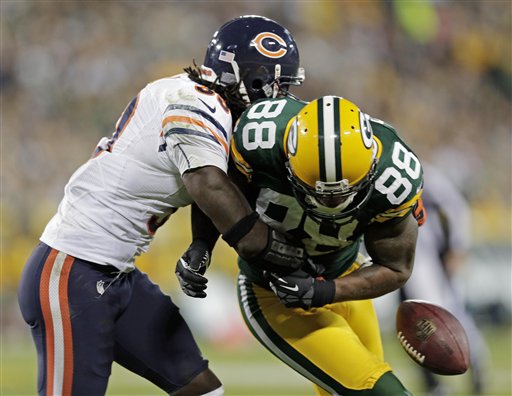 Both teams had only a few days to prepare for this game; it seemed Packers Defensive coach Don Capers had a better handle and a better scheme against the Bears offense. His secondary did a great job man-handling the Bear receivers. Jay Cutler will have nightmares of Clay Matthews chasing him for a while. At least he won’t have to see him or the Packers until December 16th at Soldier field. Plenty will happen between now and that next meeting.

Until then the Bears will go back to the drawing board to fix the offensive line, get the receivers on track, get Cutler frustration down to a minimum and not read or listen to the criticism that will come their way for several days. They don’t get back on the field until week from Sunday when they host the St. Louis Rams. It will be a long, long several days.