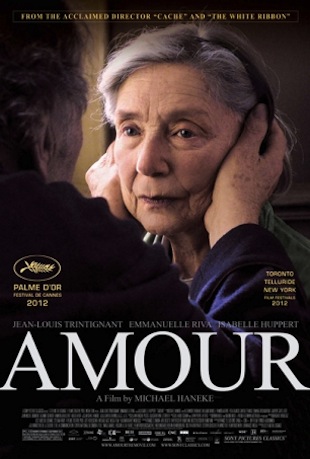 As I sat in a nearly empty theater and watched Amour, the French language film that could win Best Picture at this year's Academy Awards, I felt like crawling out of my skin. After all, how could I find any possible enjoyment in watching an elderly couple struggle and then eventually accept their inevitable road to death?

The emotions were so raw and their outcomes so exquisitely painful that I considered bolting halfway through, yet somehow lost the ability to move from my seat. I held on until the end, by which time my intial horror had numbed into something slightly more tolerable: a necessary pain that I was ultimately grateful to have experienced.

Amour is the dark horse of the 2013 Oscar race, unexpectedly nominated for five of the night's most coveted awards: Best Director, Best Actress, Best Original Screenplay, Best Foreign Language Film and Best Picture. But perhaps American audiences shouldn't be so surprised. Last year, Amour won the Palme d'Or at the Cannes Film Festival, the highest honor given to the best film in the competition.

Amour probably won't take the top prize, but all five nominations are well-deserved. This harrowing feature from Austrian director Michael Haneke (Funny Games, Caché) explores the disintigration of a marriage in painstaking detail, and never flinches from a subject matter that most films don't dare touch: what really happens to a person dying of old age. 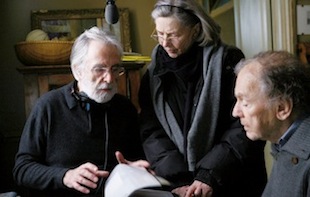 Georges (Jean-Louis Trintignant) fears that his wife Anne (Emmanuelle Riva) will never recover from a stroke that renders her weaker and more senile by the day. Still, they share tender moments together that easily recall memories of their younger selves: sexual, passionate and carefree. When adult daughter Eva (Isabelle Huppert) says that she used to listen at their door as a child and be reassured by the sounds of them making love, the sadness in the air is palpable.

At age 85, Riva is the oldest nominee for Best Actress in Oscar history. Her performance is riveting from start to finish, and certainly deserving of the award. Although her name might be unfamiliar to American audiences, both she and co-star Trintignant are cinematic legends in their native France. Riva is best known for her role in the 1959 French New Wave classic Hiroshima, Mon Amour, while Trintignant's equally illustrious career includes the sexy art house film A Man and a Woman and Truffaut's final picture Vivement dimanche.

Amour is currently playing in only a handful of theaters across the United States, with Century Centre on Clark Street and Century 12 in Evanston among them. I suggest going to see it before the Oscar broadcast on February 24, as this vitally important work is sure to win at least one of the night's biggest honors (my prediction: Best Foreign Language Film, by a landslide).