Our questioner Eleni Chappen is a web developer living in Chicago’s Ravenswood neighborhood. She got interested in the quirks of living next to the CTA elevated train tracks while riding the Brown Line, where she spotted what she thought might be her dream home: a yellow house with a pool in the backyard located right on a curve along the route.

“I always wondered what goes on in there,” she says. “I imagined them never being able to open their windows, because it would be so loud. Or them have to wear earplugs all the time. Or they’d be having dinner and the spoons and forks are all shaking.”

So she submitted this question:

What's it like to live in a home that's directly adjacent to CTA tracks?

We found many people who reported what you’d expect: Residents spoke of not being able to open windows and having things rattle throughout the house when a train rumbles by at a clip. But we also learned more surprising details about life near the tracks. One family off the Brown Line says the noise from the CTA has gotten worse, even, since renovations that allow the train to go faster. At the same time, one renter off the Red Line says life has grown quieter with the addition of newer train cars.

Maybe most surprising of all, everyone we spoke to says they’ve adapted to the noise and the shaking the train brings. And there’s a kicker. One expert tells us residents (neighbors to the tracks or not) should expect the CTA train lines to eventually get quieter, as the agency updates to newer train models and lines are revamped with noise mitigation in mind.

Until then, though, we found some folks to talk about what it’s like to live with the "L" as your neighbor.

When Mary and Floyd bought their yellow house right off a curve on the Brown Line 25 years ago, the fact that it was so close to the "L" didn’t faze them. They had always loved the look of the house and figured the rumbling of the "L" would soon become white noise. And it did, for many years. But since the renovations of the Brown Line were completed in 2009, Mary and Floyd say the noise has gotten much, much worse. In fact, they think it’s affected their hearing. “The train is just so loud,” Floyd says. “One morning I expect to wake up and it’s in our bedroom. That sort of scares me.”

Lately, the frustrations over the noise have been compounded by the fact that their property taxes keep going up, despite the impact of the noise. But this, Mary says, has a very real impact on their property value. Years back she says they put the house on the market for a while. “Over 50 percent of the people that saw that it was by the train they wouldn’t even come into the see it,” Mary says. 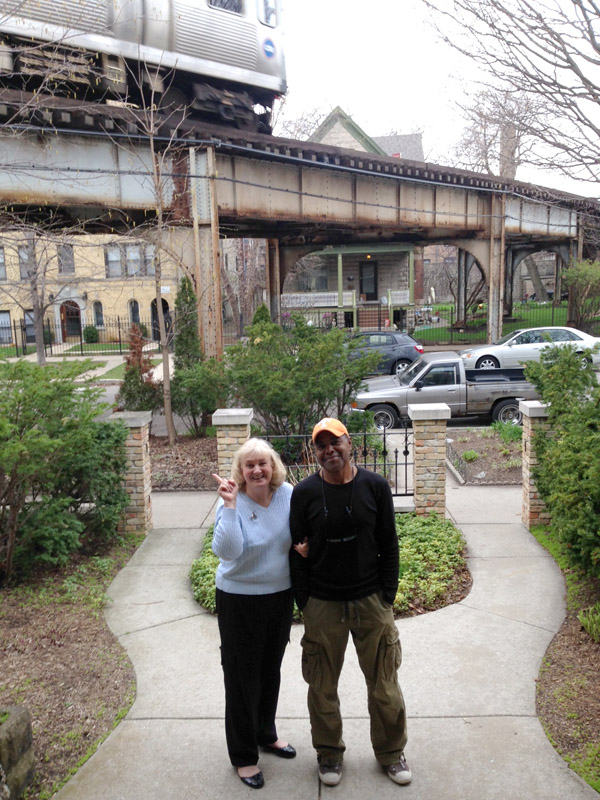 We called Landon Harper, a broker with @Properties who has been selling real estate next to the "L" for more than a decade, and asked him if it’s harder to sell when the noise of the "L" is factor. He says there is a definite discount for homes that abut the train versus those a few blocks away. But the market is strong, he says. “It’s all about finding the right buyer.”

While Mary is trying to dispute her taxes, neither she nor Floyd has ever logged an official complaint with the Chicago Transit Authority. And, in fact, few people do. CTA says the agency only received seven complaints in 2014. And that is half the number from the previous year.

Mary and Floyd, semi-retired and in their mid-60s, admit there are strange quirks about living so close to the tracks. Like when the vibrations of the train cause her china to move around inside her cabinet. Or when blobs of tar and large bolts and pins come flying off the tracks. There have been two fires on the tracks from sparks, Mary says. And in the parking lot under the tracks people come and park their cars to do, well, you know what. “The workers … they called this Lovers Lane,” Mary quips.

Despite all her gripes, there are also charming and funny things about living next to the "L," says Mary, who asked we just use her first name. Mary has a pool out back where she swims all summer long. Frequently her friends and neighbors — or the men who moved her couch — tell her they see her out swimming. “I guess everyone on the train sees me swimming,” she chuckles.

Mary says she has a love-hate relationship with the train. And she wrestles with it every day. Is it worth it? When she looks at her surging tax bill and the train comes screeching around the corner, it’s hard to see the upside. But when she hears the jingle of the Christmas train as it barrels down the track, or sits with a glass of wine at dusk and watches the glowing train go by, she feels connected to her city. 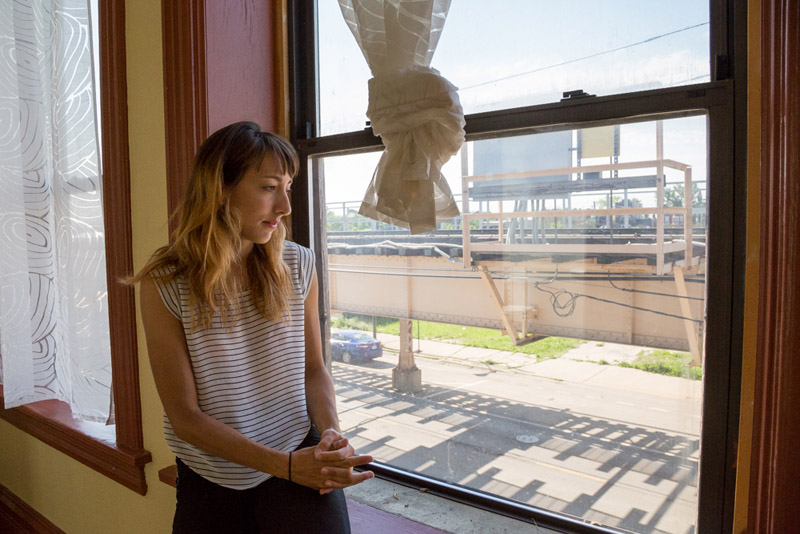 The first night Daphne Karagianis, 29, spent in her apartment, an arm’s reach from the Green Line off Kedzie and Lake, she almost cried. “It felt like the train was inside the apartment. It felt like the place was falling down,” she says. Daphne’s apartment was so close to the train stop that she could hear the announcements from inside. (The most disconcerting, she says, was when the stress calls came through for someone needing assistance on the platform.)  Regardless of all that, however, it took only about a month for her to get used to the sound.

What she never got used to, however, was the feeling of living in a fish bowl. If she wanted to open the curtains, it meant CTA riders were staring into her living room. “When I went on the train line I could see inside our house, the couch and the cat,” she says.

Despite the fact that the train was so close, “it felt like you could reach out and touch it.” Daphne says she never made a connection to a stranger, though she did ask her friends to wave as they pulled into the station on their way hang out at her place.

Daphne lived in the apartment for two years until this spring, when she moved to Logan Square. She said her move had nothing to do with the train, and she’d even consider renting near one again — though she would never buy a place so close to the tracks. 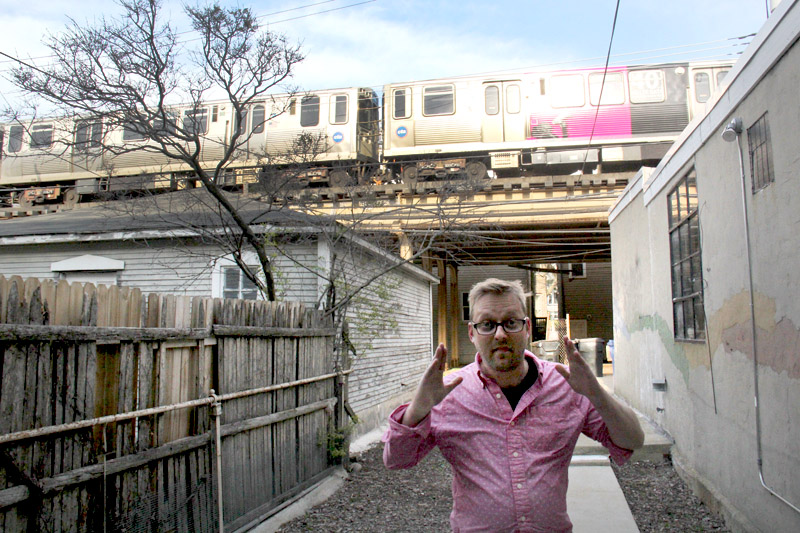 Recently, WBEZ engineer Collin Ashmead-Bobbitt, 34, got a text message from his buddy. “You doing laundry?” it said. Collin was confused. “How do you know? Are you here?” he responded. “Nope. Headed downtown on the Red Line and saw you go outside with your laundry basket.”

It’s just one of the many quirks about living in an apartment next to the train tracks. Others include stacking his books vertically to prevent them from getting jostled and falling off the shelf, to hanging pictures with four to five nails per frame. “I’ve gone through a lot of wine glasses,” he adds. Collin, an audio engineer and video editor, has lived in his Lincoln Park West apartment, a converted cottage house, for more than four years. At $500 a month the place is a steal. But it also backs up to three train lines: the Red Line, Brown Line and Purple Line.

Despite the constant noise and vibrations, Collin says he’s confident it’s not a health risk for his hearing.

“My ears and eyes are my life and I would not live in a situation where I thought it would be damaging to both those senses,” he says. “As an audio engineer and a film editor I rely heavily on them.”

It’s been more than four years since he moved into the place. Even he admits the first few weeks were an adjustment period. “I considered buying earmuffs,” he says. But soon, the sounds of the train became such white noise that life seemed off kilter when they weren’t around. When he went to visit his mom in a suburban neighborhood in upstate New York, “all I heard was crickets,” Collins says. “It really freaked me out that there was no trains and no sirens. The soundscapes of the city were so far away.”

Even Collin’s cat, Mr. Venkman, likes watching the train from the window. “He gets excited when it comes,” Collin says.

And when it doesn’t come? Well, that’s even worse in a certain way.

“It’s the lifeline of the city,” he says. “And when you don’t hear it you definitely know something’s up and you should turn on the radio.” 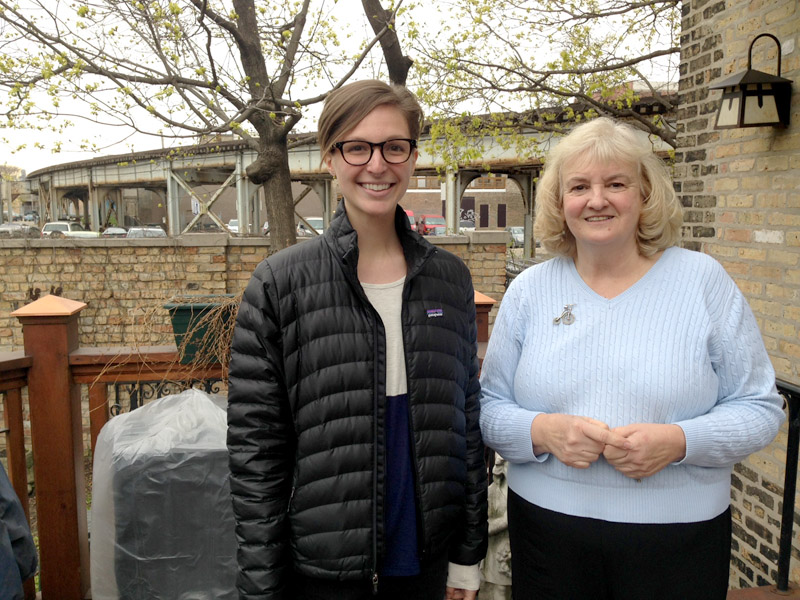 When we called Eleni Chappen, 27, to ask her more about why she posed this question to Curious City, we did not expect that she was actually now sort of living it.

Ironically, since asking this question she’s moved jobs and works in Ravenswood in an office sandwiched between the Metra and the Brown Line. And she’s realized something: “After a while, you do kind of ignore it.”

But that still didn’t really answer the heart of her question: If one could adapt, was living next to the "L" a smart investment? Could it be a best-kept secret of Chicago real estate?

“Maybe I am scheming secretly to buy a house next to the tracks,” she says. "Is it less than a normal house?”

Meribah Knight is a freelance journalist in Chicago and reports for WBEZ’s Curious City. Follow her at meribahknight.com and on Twitter at @meribah.