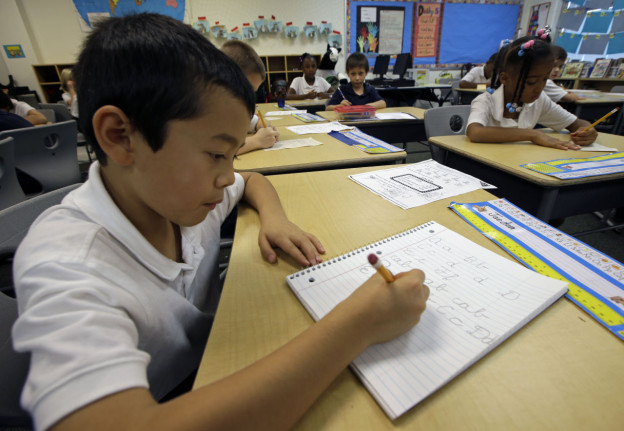 You may have seen or heard the ads from Bic, encouraging kids to “Fight For Your Write” to learn handwriting. The company – best known for making ballpoint pens – is on a mission to “save handwriting.” It’s encouraging students and teachers to get excited about handwriting again, in this age of technology.

Here & Now’s Jeremy Hobson talks with Pam Allyn, Bic’s “Fight For Your Write” spokesperson and founding director of the global literacy organization LitWorld, about whether handwriting is really disappearing from schools, and why it’s important to “save” it.

Does handwriting need to be saved?

“You know, it really does. I think we’re in a moment where people feel that technology’s going to kind of be the solution for everything, and in fact, technology’s a tool, but handwriting is a very powerful and beautiful technique and strategy that people have used for many, many years to make ideas come alive on the page. And I think right now, my concern is that especially in schools, but just in thinking about raising our kids as parents and educators that we are very focused on, you know, ‘OK, it’s all got to be about moving in that technology direction,’ but the fact of the matter is writing by hand is a reflective cognitive thinking strategy that actually really helps kids.”

“There are actually a couple of really interesting differences. Speaking as a literacy educator and both in terms of looking at the research and also being in classrooms alongside children, I see some profound differences and one of them is that making letters on the page is a lot different from pressing a keyboard. They’re looking at the letters, they’re thinking about the letters, they’re forming the letters. So something from that – moving from the cognitive to the actual movement of your hand on the page – is very powerful because then when you’re going to your own reading experience, for example, and you look at those letters they have more meaning. Just like the artist, you know, making a color on the page, then goes and looks at that painting, feels a lot differently about it, can really understand what went into it.”

“And then the second thing that I think is really interesting, and I see it time and time again when I’m working with children and even young adults, teenagers in schools, when they have a pen in their hand I see more creative thinking – like they’ll turn the page around, there’s more doodling, there’s more kind of a thinking on the page going on. Whereas when they’re especially emerging writers, when they sit down – like a 7 or 8-year-old who’s still growing as a writer, not yet completely set even in grammar or language skills on the page or on the screen – there’s something about having the pen in the hand that gives them more ownership, more control, they can feel like they’re in charge, you know, that idea of authorship.

… And there’s something incredible that happens with that and so I don’t want to lose that and I don’t think it’s an either-or. You know, I don’t think it’s ‘Well, now we can’t use tablets. We should only use pens.’ For me, I see it as a blended world. I grew up in a world where I got to learn how to write by hand, and then I got to learn how to use a tablet, and I want to make sure kids can do both.”

On her message and Bic’s campaign

“For myself, I am a literacy advocate, expert, author. I’m a teacher. I spend thousands of hours a year on schools and I would never say anything that I didn’t think was good for kids. And when Bic found me and they said ‘Look, you know, this means a lot to a lot of people. Parents approach us. Teachers approach us. They’re concerned because they’re saying, you know, ‘In our schools, or even at home, we’re just wondering what are we supposed to be doing?’ And, you know, when you ask ‘why should we believe this?’

I think the thing is I’m inviting people to be a part of this mission because I do believe in it… You think about how incredibly important the lives and stories of children are for me and my work, there is nothing more genuine than my mission to make sure that children’s stories will get heard and also will get preserved. There was a story of a baseball player who the kid caught the ball at the stadium and he went over to sign the ball for the kid. And he said to the kid, ‘Kid, you got a pen?’ And the kid said ‘No. No I don’t have pen.’ And the guy said ‘You got to have a pen.’ You know, and that’s it. I mean, that kind of sums it up. You can’t lay your tablet on the baseball. You know, it’s just moments in your life when it means something.”