Make sure your television remote control has plenty of battery power for the local sports action tonight. The Blackhawks try again to stave off elimination in Detroit and the Cubs travel across town to US Cellular to play the White Sox.

Game 6 will be another bruising battle for the Hawks and Red Wings. Down 3 games to 2, which team will show up for Coach Joel Quenneville?

Will it be the one that dominated in the first and last games or the one that was battered and embarrassed by their arch rivals in the middle contests?

On Saturday, the Blackhawks had the edge on every aspect of the game. They must try to carry the momentum at Joe Louis Arena in Detroit. It will not be easy. During games 3 and 4 the Wings were fueled by their rabid fans and physically dominated the Hawks, especially Jonathan Towes. Chicago's "Captain Serious" has found scoring goals a huge struggle this post season. When he finally scored his first of the playoffs last Saturday (on the power play, no less) it was a huge weight off his shoulders and it seemed the team felt it, too. 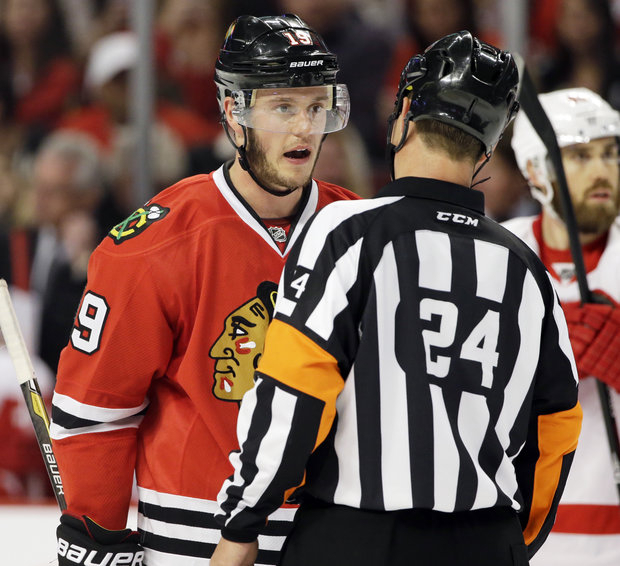 Rarely in a team sport like hockey can one player affect a team, but Toews is not an ordinary player. He is their leader and he provides important lift that raised the team to the best regular season record. After the game, Toews finally had a smile on his face and you could see he was relieved his team fought to play another day.

What was one of the big reasons the Hawks won a Stanley Cup three years ago?

If you answered traffic in the net, defense and scoring on the power play you would be right in all three categories.

Andrew Shaw (and to some extent Bryan Bickell) must disrupt Detroit’s goalie Jimmy Howard. Shaw is not big, but he must plant himself in front of Howard.

The power play has been abysmal for most of the year and the post-season. It finally was better last game after the Hawks scored twice.

Finally, the area that has been the strength of the Blackhawks has been their defense and they need every combination to continue to play hard and block shots.

If the Hawks can control the puck and play every minute like it is their last, we will see a game six at the United Center on Wednesday. If not? It will be the last game until next fall and it will be a long summer of "what ifs?"

Cubs-Sox: will the fans care?

Not a lot of luster tonight for the start of a four-game series between the Sox and the Cubs. Neither team is lighting the baseball world on fire. The Sox have finally reached .500 after sweeping the lowly Miami Marlins yesterday. The last place Cubs snapped a six game losing streak beating the Reds in Cincinnati yesterday.

But there are still bragging rights for the victor. In a new format, the White Sox host the first two games and the Cubs will welcome the Sox the final two contests. Before yesterday’s game Marlin outfielder Juan Pierre talked about playing on both sides of town and thought it was very special. Pierre said, “It won’t be the same without AJ (Pierzynski).” How true that is.

Who could forget Cub catcher Michael Barrett punching AJ? There is no Ozzie Guillen to point out how bad the amenities are at Wrigley Field. When we asked Sox manager Robin Ventura about Wrigley, he likes the place (no drama there).  The Cubs had their fair share of incidents, remember Lou Pinella getting into a shouting match with Carlos Zambrano and then sending him home?

Although there have been more empty seats the past few years, it's still fun for the fans to show their colors: Cubbie blue or Sox silver and black.