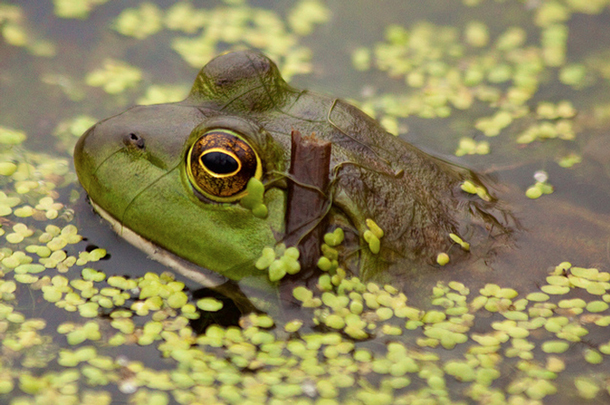 Ecologists have long known of buckthorn’s ability to push out native plants, but two new studies from Chicago scientists suggest the woody shrub also changes the distribution of large mammals like coyotes, and causes spinal defects in unborn frogs.

"We already knew that the buckthorn was outcompeting other plant species," said Seth Magle, director of the Lincoln Park Zoo’s Urban Wildlife Institute and author of one study currently in publication. "But no one had looked at the mammal community to see if they’re affected. And it turns out that they are."

An invasive species imported from Europe as an ornamental plant, buckthorn has overrun many native ecosystems, including oak savannas and prairieland. Its spindly branches form a dense undergrowth that blocks sunlight from native plants, providing cover for crime in some urban corridors. According to the new study, forthcoming in Natural Areas Journal, white-tailed deer were more likely to show up in sites without buckthorn, while coyotes and opossums were more common in sites invaded with buckthorn.

An Urban Wildlife Institute intern, Marian Vernon, first noticed the trend. Magle encouraged her to see if the data would bear out her observation. Vernon, now a PhD student at Yale University, and her colleagues used motion-triggered infrared cameras to document the appearance of different mammal species at 35 Chicago area sites.

The study also found seasonal changes in association with buckthorn. Coyotes shifted into sites with buckthorn from spring to summer, affecting the distribution of one of their preferred prey species, white-tailed deer.

While buckthorn may change the distribution of some mammals, another study suggests it directly harms amphibians.

Buckthorn emits a chemical called emodin, which has a wide variety of bioactive properties. Previous studies found emodin has laxative properties when eaten by some animals, and is allelopathic, meaning it inhibits the growth of other plant species nearby.

New research from Northern Illinois University student Allison Sacerdote-Velat and her PhD advisor Richard King found emodin also affects frog embryos, causing fatal kinks in their developing spines. The research is slated to be published in an upcoming edition of the Journal of Herpetology.

The effects hit native species harder than African clawed frogs, a common test species for environmental toxicity studies. Buckthorn produces emodin in its roots, fruit, bark and leaves, which it drops early in the season to salt the earth, so to speak, against competitors. Buckthorn in Illinois is particularly aggressive in its ability to invade wetlands, strengthening its impact on amphibians who live and breed in those areas.

“[Buckthorn] litter is probably changing the aquatic invertebrate community,” Sacerdote-Velat said. “Over time these factors build up and you start losing species diversity.”

The authors of both studies noted the need for further research. Magle pointed out that each study site had only one camera. Small mammals and birds are not big enough to set off the motion-triggered cameras, so it’s not clear what effect, if any, buckthorn might have on other species.

For Magle, the research is a reminder that small ecosystem changes can have cascading effects.

“It shows us that our urban areas are ecosystems,” he said, “where everything is connected to everything else.”