Skip to main content
Get the flash player here: http://www.adobe.com/flashplayer

This weekend I went on an odyssey of sorts, through some of the strongholds of American popular culture.

Friday night I was at McCormick Place for C2E2 – the Chicago Comic and Entertainment Expo.

Then Saturday, along with my colleagues Tim Akimoff and Andrew Gill, I headed to Munster, Indiana to brave Dark Lord Day, the annual heavy metal and beer event hosted by Three Floyds Brewing Company.

Both are fairly major cultural events. Over 50,000 folks made their way through C2E2 over the weekend. And in just a few years, attendance at Dark Lord Day has grown from a couple of hundred to 8,000, according to organizers.

Over the course of two days I got to talk with lots of great people: Local and international master brewers, musicians, comic book talent scouts, graphic artists, and novelists.

Many are enormously talented professionals, approaching or at the height of their game.

Still, in the midst of all this adult achievement, I couldn’t help feeling like I was among a pack of highly articulate adolescents.

The Gen Y and Millennial crew may be growing old, but their cultural choices haven’t aged at all.

This isn’t entirely new. Baby boomers were probably the first contemporary cohort to believe getting older didn’t mean putting away childish things, like their attachment to rock music. Instead they aged along with their cultural heroes, who in turn kept on playing and picked up new fans among the boomer offspring. Turns out it can be incredibly awkward when you and your Dad like the same band.

What does feel different now is that we’re not just remaining attached to our superheroes and suds, we’re giving them an upgrade.

Older music fans at Dark Lord talked about local band Bloodiest as “adult metal” (and were unabashed in their praise of concerts that allowed them to get their metal fix and ended at a reasonable hour).

And though keg stands are no longer the center of a party, that’s likely because the beer is way too good, too expensive, and too high in alcohol content to drink in volume. 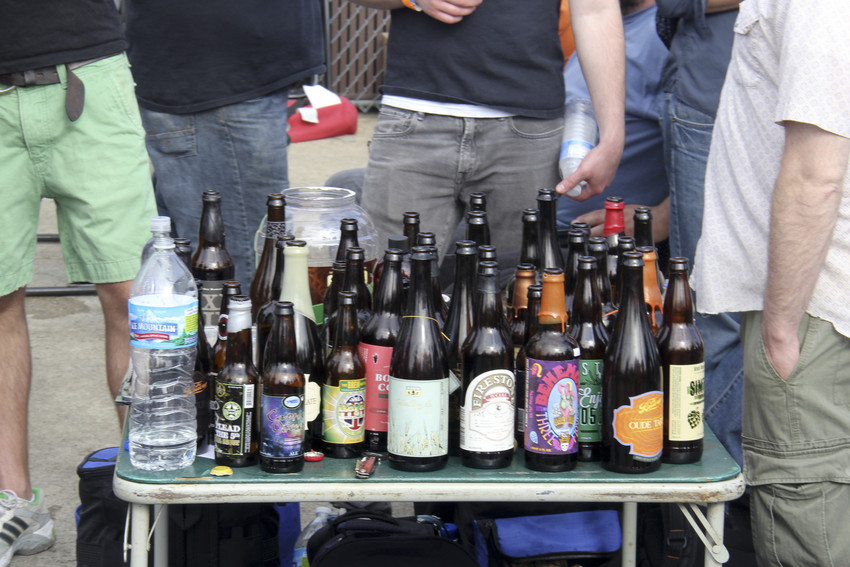 Dark Lord, that pitch black, viscous, burnt sugar, sticky toffee and chocolate bomb of a Russian Imperial Stout, has an ABV of 15 percent and cost $15 for a 22 ounce bottle. Barrel variants sold for a whopping $50.

For a once-a-year beer, that price might be more reasonable than daunting. And clearly the Dark Lord crowd has the means to pay more. Outside the event, the ground was littered with rows of empty craft beer bottles, high end  “dead soldiers” tailgaters had brought to drink or trade for other rare beer.

Back at C2E2,  many attendees have similarly deep pockets, and are willing to shell out for elaborate cosplay costumes, rare back issues, or other comic related paraphernalia (a couple of guys from Los Angeles were hawking expensive wooden glasses frames imprinted with vintage comic book art).

All of this might provide further evidence of the cultural rise of “nerds”, the decidedly dude mentality at play in much of pop culture, or our general refusal (or inability?) to become adults.

And there’s merit to that line of thinking. After all, is it just a coincidence that the forthcoming (and highly anticipated) comic Peter Panzerfaust features that little boy who just wouldn’t grow up?

Still, like it or not, many of the tastes acquired in our adolescent years are pretty much driving adult or mainstream culture right now, often with fantastic results.

Every week seems to bring another Irish pub, burger or rib joint, or taco stand run by a celebrity chef. Parson’s Chicken and Fish, a tonier take on shack food which opens any day now, will serve margaritas with a “Sour Patch Kids” flavored rim, and a Negroni “slushie” machine behind the bar. Novelty yes, but those frozen cocktails are delicious.

And even the most challenging cultural forms have been invaded. I ended my Saturday night at the opening program of Frequency, an ambitious new music series run by The Chicago Reader’s Peter Margasak.

Openers The Green Pasture Happiness, a trio of young electronics improvisers, make music with modular synthesizers, and as good as they sound, put on a show that looked less like a musical performance and more like a software hackathon.

Meanwhile, Dal Niente’s Mabel Kwan closed the evening with Stefan Prins Piano Hero #1, in which the piano and pianist, thanks to a midi keyboard, live electronics and video, are transformed into a glitchy, herky jerky variant on a Nintendo game.

Both offered further proof that adolescent pursuits, in the right hands, can in fact age well, into complex and yes, suitable-for-adults cultural fare.