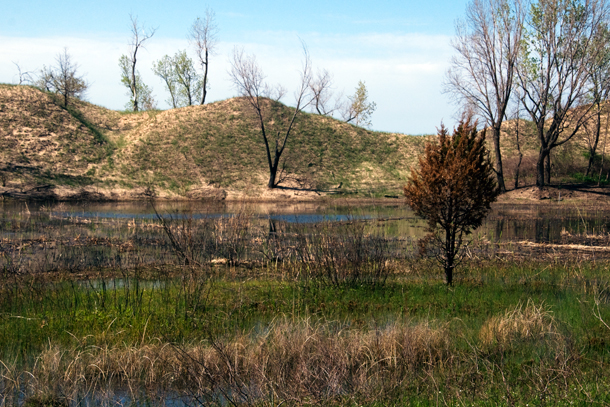 Although county lines parcel out the southern shore of Lake Michigan like garden plots, the environmental issues that unify people from Michigan City, Ind. to Chicago do not respect political boundaries.

Nor do most economic issues. Industrial decay and depopulation have left communities throughout the greater Calumet region with some common problems, as well as shared opportunities.

That was the message from the inaugural Calumet Summit, a conference convened this week in Gary, Indiana’s lakefront Marquette Park by the Calumet Stewardship Initiative.

The summit follows some major moves in the Calumet area, not least of which is the Millennium Reserve initiative, dubbed the nation's largest "open space" project. (Although it might better be described as a regional plan that ties conservation to urban redevelopment.)

After 140 years of heavy industry, many of the region’s factories have closed and left brownfields, violence and unemployment in their wake. And while efforts to rehabilitate the Great Lakes have mopped up some pollution and begun to clamp down on invasive species, a report released Tuesday by the international body that advises Canada and U.S. on the lakes said the area still faces serious challenges. Agricultural runoff, flooding, drought, and the march of both invasive species and a changing climate are among the problems that plague people who call the southern end of Lake Michigan home.

Joel Brammeier, president and CEO of the Alliance for the Great Lakes, said as much Tuesday at the Calumet Summit. The Great Lakes Restoration Initiative, a federal funding program initiated by President Barack Obama’s administration, has enabled environmental work and research in recent years. Perhaps more importantly, Brammeier said, it has brought attention to the region and galvanized those already doing important work on the ground.

"As important as the money is the near-universal expression of support for the program year after year," he said. "That’s really at the heart of the success in moving money to entities on the ground."

Few people articulate that vision better than Lauren Riga. Tapped by Mayor Karen Freeman-Wilson to head Gary’s new department of Green Urbanism, 28-year-old Riga previously served as a U.N. delegate at the 2010 climate change conference. About one quarter of Gary's buildings are vacant. As Riga and the mayor look to spur an economic revival, they plan to incorporate green infrastructure into new development. Meanwhile local and state agencies have helped rehabilitate habitat along the Indiana Dunes National Lakeshore, home to a series of fragile ecosystems known as pannes — wetlands nestled between sand dunes.

"[Riga] represents a new way of thinking for the region," said Andrew Pelloso, an environmental consultant who formerly worked for Indiana’s Department of Environmental Management.

"Everyone seems to see the region by Gary’s fate and fortune so what they do matters," he said.

"Between now and the next summit go out and do something," U.S. Rep. Peter Visclosky told the audience, "or everyone will have wasted their time over the two days."

Pelloso said for all the region’s challenges, and the bureaucratic headache it can be to get things done, the conference’s take-home message was affirming.

"We’re bound together by a common resource,” he said. “Not by state lines.”