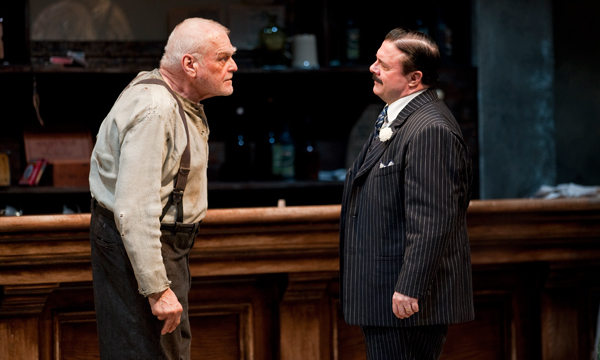 If you want to suggest that celebrity distorts the theater, you’re operating in a venerable tradition. People complained that Sarah Bernhardt eclipsed her material; the same thing was said (with a sniff) about Richard Burbage; and probably someone objected that John Wilkes Booth’s fame distracted from the audience’s full appreciation of his cry of “Sic semper tyrannis.” Yet on one level, at least, the argument is absurd: Why wouldn’t marquee value matter in the theater? Theater invented the very concept.

And celebrity has its theatrical uses. Some years back, a New York Times writer excoriated Ethan Hawke for performing on Broadway in a new play -- not up to the Times-man’s standards -- that had been written by Hawke’s friend. The writer spent five columns slashing the effort as a movie star’s vanity project. But it seemed equally reasonable to interpret it as a movie star’s good deed, using his power to bring light to a new play that might otherwise have languished. In England the government subsidizes theater; in the U.S., movie and tv stars take on that task, and that’s absolutely to their credit. David Schwimmer, who was directing Race at Lookingglass at the time, made the same point: “It’s fine if people come because they want to see ‘that guy from tv.’ Whatever brings them to the theater.”

So it seems churlish to object to the fact that people who wouldn’t cross the street to see a fine new play from the Strange Tree Group are willing to spend four hours at the Goodman for the privilege of seeing a pair of well-known New York actors in the (ample) flesh. Yet Brian Dennehy’s arrival in Chicago for his annual collaboration with Bob Falls always manages to set my teeth on edge. Why?

It used to be because I thought Dennehy didn’t work hard enough in Chicago. If you get a standing ovation just for showing up, why do more?  But gradually he overcame that it’s-only-the-provinces attitude (or I overcame my Second City complex). And yet, his visits remained stuck in my craw. Then I realized: Visits from out-of-town celebrities suggest that to be taken seriously Chicago theater still has to import star-power from New York.

We’re happy to launch stars: Every Chicago theatergoer wants to recite the list of famous people they saw back in the day (though if all the people who claim to have seen the Steppenwolves in that Highland Park church basement had actually been there, the church would have had to be the size of the Mormon Tabernacle). And when those people come home, we’re as proud as parents at graduation: Look at how well little Billy has done, not to mention Gary and John and the other John and Laurie and Tina and the other Bill and Jim and Lucas and Joan and Michael.* These people are ours; we feel like we created them, and we’re happy to see them make good.

Moreover, we can actually see them; we can appreciate their work independent of their celebrity, because we’ve seen it before. The worst thing about seeing a show with a major star–Ralph Fiennes in Hamlet post-Schindler’s List; Daniel Craig and Hugh Jackman in A Steady Rain post-James Bond and Wolverine–is that fame gets in the way. You’re looking at the actor instead of the character. Craig and Jackman gave remarkably modest performances, almost aggressively underplaying their roles; but it was impossible to be unaware of that, or of the fact that the theater was full of people for whom the play was just an excuse for sharing air molecules with sexy famous guys. Liam Neeson’s able performance in Anna Christie played second fiddle to his fame and the speculation accompanying it that he was romancing his co-star. When Paul Newman did Our Town on Broadway, he walked onstage mid-line to prevent the audience from applauding him just for being famous; but that couldn’t make us forget he was Paul Newman. All it did was make us feel cheated out of acknowledging that. Clutter of this sort makes it near-impossible to watch the show.

I’m not holding out for some mythical purity, but we all know the difference between a show being served by its actors and actors being served by a show. And that distinction creates another one: between being stage-struck and being star-struck. If you’re stage-struck, you’ve been overcome by someone’s performance, so the disbelief you’re supposed to be suspending simply melts away. (Every time this happens to me it’s so viscerally thrilling I understand why the Puritans wanted to ban theater as sinful.) If you’re star-struck, though, you’re engaged with the physical reality of the performer to the exclusion of the work s/he’s supposed to be doing. In a theater town like Chicago, that's a loss you can feel.