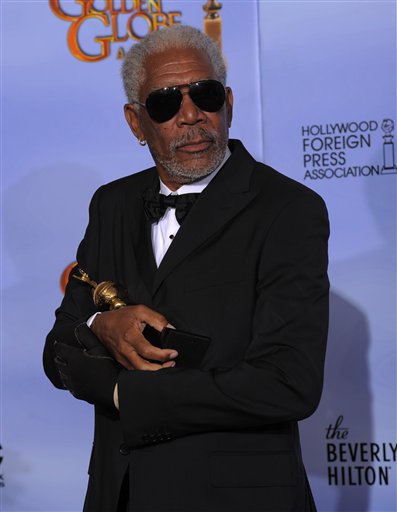 Morgan Freeman: He's known for many things. He's played God in too many movies to count, as well as the President. He voiced a surprisingly tear-jerking film about penguins.

But lately, he's been in the news for less-than-flattering reasons. The National Enquirer reported in 2009 that Freeman's wife had left him because of a relationship the actor was having with a stepgranddaughter from a previous marriage. Now, further gossip alleges that he plans on marrying the young woman.

Despite the yick-factor, the Paper Machete's Chad the Bird (played by puppeteer Josh Zagoren) says he doesn't blame Freeman's questionable choices in his older age. Read an excerpt or listen below:

"OK, so, in a great world like this where we are currently $1000 away from sequencing the human genome -- that's true, look it up, stop making that face -- being young and staying young is easier than ever. And nowhere better is this illustrated than in the life of celebrity narrator and featured celebrity master of every movie ever made, Morgan Freeman.

Turns out, big poppa Freeman is a champion at keeping frisky, and by that I mean banging young chicks. Turns out, the Shawshank silverfox, at 72-years-old, is now (and has been) aculimentary with a 27-year-old for sometime now. (Accouplementary means sex. It's French for sex. Accouplement. I learned that today and now so did you.)

So yeah. Old Hoke has been driving Miss Daisy for a lot longer than anyone knew about -- including his wife, whom has divorced him on grounds that, well, he's been marching the penguin behind her back.

And why not? When you've been like, alive for 72 years, you're bound to get a little crazy, right? I mean, think about it: You've been on the earth for seven decades plus two more years. He's seen the world change so much; lived through war after war, president after president. And then the tech revolution hit in the '80s and there's that bullsh**. I mean 'cmon: I'd go deep impact on a 20-year-old after that and never feel bad about it."