As classrooms all across the country switch over to new learning standards known as the Common Core, the controversy surrounding them continues to grow.

The Republican-controlled Indiana legislature scrapped the voluntary national standards earlier this year and the ultra-progressive Chicago Teachers Union House of Delegates passed a resolution in May pulling their support of the Common Core.

The whole idea started as a multi-state effort to come up with a common set of learning standards across the country. The Obama administration pushed for Common Core by incentivizing states to adopt them in order to be eligible for billions of dollars in federal grants, dubbed Race to the Top.

Forty-six states and the District of Columbia initially signed on and now, five states have scrapped them.

But in all of the political back and forth, it's good to remember there have always been standards in public schools. Learning standards that say what kids should know, when.

“The standards are where the students should be to show mastery, and the curriculum is how you get there,” said Kristi Wheatley, an English teacher at Lincoln Junior High School in suburban Skokie. “For example, what (we) did today … might not work everywhere. If a teacher wanted to do something totally different, that’s okay, as long as they’re learning how to evaluate an argument.”

During the last two weeks of school, seventh graders in Wheatley’s class were reviewing for their final test of the school year. The desks in her room were set up in clusters of four—a common arrangement for all of the Common Core lessons WBEZ sat in on. Students would work for 15 minutes reviewing each skill and then pass the materials to the next group over and start on another.

Unless you’re a student or work in a school, you’ve probably never heard what teaching to the new standards sounds like in schools. WBEZ interviewed several teachers from a variety of different schools to look at --and listen to-- the standards themselves.

Hear what a Kindergarten math lesson sounds like under Common Core.

Hear what a 10th grade English standard sounds like under Common Core.

Wheatley has taught at Lincoln for nine years and loves the new standards because they give her more flexibility over what and how to teach. She didn’t realize they could be controversial until recently.

“My little brother, we were at dinner the other night for his birthday, he is not in education at all, and he was like, ‘What’s the deal with Common Core? There’s all this stuff on Facebook about it,’” she said.

That was around the same time comedian Louis C.K. had started ranting about Common Core math in his kids New York City public school on Twitter. He brought it up one night on The Late Show with David Letterman, saying he had a hard time helping his kids as they struggled with word problems.

Gina Biondi, a 5th grade math teacher at Chicago International Charter School’s West Belden campus, walked me through a problem that sounded very confusing at first. Here’s what it asks:

Joseph’s elementary school was having a bake sale to raise money for new computers. His class sold cupcakes in the bake sale. Shauna sold 10/9ths times as many cupcakes as Joseph. Miguel sold 7/9ths as many as Joseph. Draw a picture to model the relationship between these three classmates’ sales.

This problem showed up on an end of the unit test. Eventually, with Biondi’s help, I solved the problem by drawing three boxes, one to represent Joseph’s whole (or 9/9ths), one slightly smaller with a little cut out to represent Miguel’s sales and one slightly larger to represent Shauna’s sales. 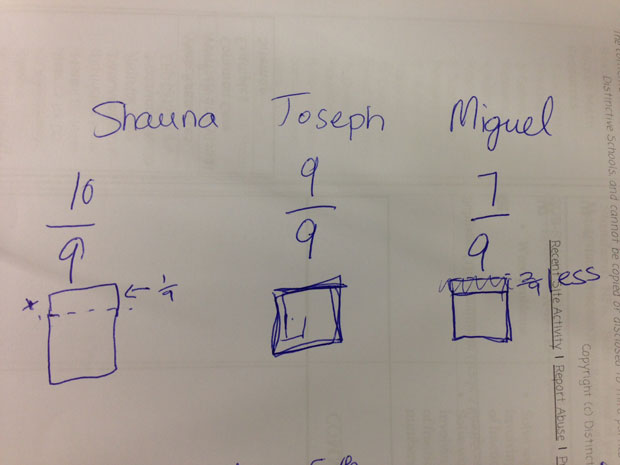 Biondi said that part of what makes the Common Core math standards so different from before is that there’s a lot more explanation and often more than one right answer.

And that change has proven to be a huge adjustment for not just for the students.

Bensenville math specialist Angie Adams said communicating the changes in the math standards has been one of the biggest challenges to implementing Common Core.

“Sometimes I hear, ‘Well I don’t understand why they’re doing that that way. I learned the old way. They can just do that,’” Adams said. “But how many times do you ask a 1st grader to explain why are you carrying that 1, what does that mean? They don’t know. So by teaching them other (methods) is to develop understanding.”

Both Adams and Biondi say the new math standards are hard because they ask kids—and their parents—to look at numbers in a totally different way, to have what’s called numerical literacy. That’s like regular literacy, only with math. Both point to the fact that it remains socially acceptable to say “I can’t do math,” but it’s less common for someone to tell people that they cannot read.

In both English and Math, nearly everyone interviewed for this story summed up the new standards by saying something like this: It’s not teaching kids what to think, it’s teaching kids how to think.

It doesn’t happen overnight and it requires a lot of teacher training.

“Someone said it best when they said teachers used to be the keepers of knowledge, so you had to go to school to find out ‘what is photosynthesis’ or ‘what caused the Civil War,’ but right now  these kids, especially the junior high kids, they can google anything,” Wheatley, the teacher at Lincoln Junior High, said. “That’s not my job, my job is not to teach them that factual information.”

Wheatley said her job is to teach kids skills they can’t get just by typing something into a search bar.