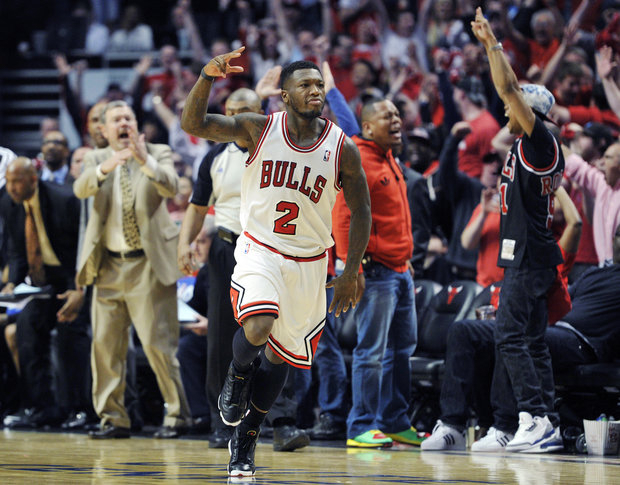 There’s no time to catch your breath after the thrilling triple overtime 142-134 win by the Chicago Bulls this weekend. The Bulls are in Brooklyn Monday night trying to close out the series. They now lead the Nets three games to one in this best of seven series.

It will not be easy. Then again, the Bulls have never had it easy this season.

The Bulls showed that despite injuries and not having their biggest star they have one intangible: heart.

Coming back from a 14 point deficit (with the crazy shooting of back-up point guard Nate Robinson) elevated the battered team.

Playoffs are not just X’s and O’s. The raw emotion from an overtime win may be a catalyst Monday.

But the Bulls still have to overcome injuries, and on Saturday, minutes mounted up on already aching players.

Joakim Noah, with his sore foot, went way over his allotted time. He played 40 minutes even though the team’s medical staff recommended a limit of 25.

Luol Deng was hobbled after Saturday’s victory too. He has been active on defense and come up with a big shot here and there. There is little doubt that Deng will do everything he can to be on the court.

The biggest concern is for Kirk Hinrich. He suffered a deep thigh bruise and may not get to play. Hinrich played a team high of 59 minutes in the last game. His steady hand running the offense and gritty perimeter defense is a big reason the Bulls have an advantage in this series. If he is unable to start, that job will go to Nate Robinson.

Robinson can light up the scoreboard, but doesn't match Hinrich on defense. This void would give the Nets' Deron Williams more opportunities.

There is one more advantage the Bulls have over Brooklyn: coach Tom Thibodeau.

The Bulls coach has this team well prepared and they trust him. Somehow you don’t get that feeling with the Net’s P.J. Carlesimo. The interim Brooklyn coach doesn't look in sync with his team. They have had clear advantages and still find themselves one game away from elimination.

Thibodeau made the choice to keep ineffective veteran Richard Hamilton on the bench Saturday. We’ll see if that changes with the Hinrich injury.

If Marquis Teague sees playing time, Williams and Nets back-up C.J. Watson will eat the Bulls rookie alive. Thibodeau might have to use Jimmy Butler to defend Williams.