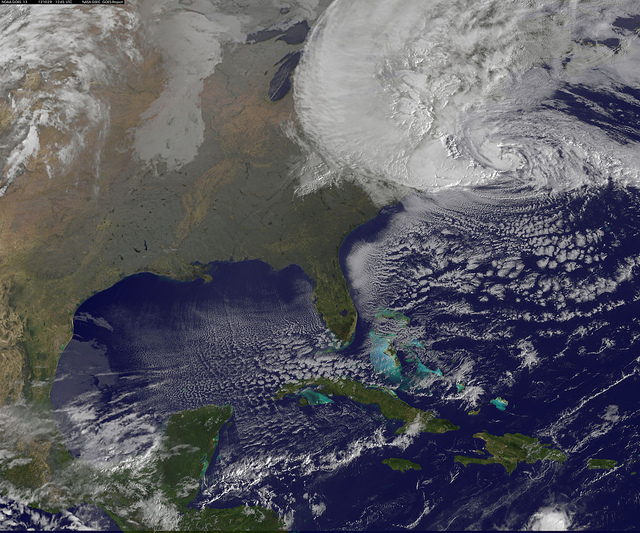 Even if you're not on the East Coast, the Chicago-area isn't exempt from the spray that is Hurricane Sandy. We're updating this post throughout the day(s) with all you need to know:

- The University of Chicago and Northwestern University have pushed back their Early Admissions deadlines to next week, for those affected by the storm: "This extension applies to your application and all supporting documents. Please rest assured that if you are adversely affected by the storm we will happily receive your materials after November 1st with no penalty to you. Be safe!," said the UofC in a statement. Northwestern has extended their Early Decision deadline to November 7.

- Flights are being cancelled all over the place, so if you're traveling, you might want to make other arrangements. NBC Chicago reported that change fees are being waived by airlines at Midway and O'Hare airports, and also noted that the storm "led to a congested scene at O'Hare Airport [Sunday night] where officials set up cots overnight for stranded passengers." The Associated Press reported that, according to the Department of Aviation, 100 flights were cancelled at O'Hare on Sunday and a dozen at Midway. As of 5:30 pm, O'Hare has cancelled more than 450 flights today, while Midway has cancelled more than 100.

- 240 ComEd crews from the Chicago area are heading to the East Coast to help combat power outages (also via NBC Chicago).

-The Chicago Board Options Exchange is closed today, as the New York Stock Exchange is too. Some markets at the Chicago Mercantile Exchange are closed as well. The AP reports that financial markets will be closed again on Tuesday.

- There's a lake shore flood warning in effect starting early Tuesday morning, with "strong northerly winds of 60 to 60 MPH" expected "late Monday through Tuesday evening," though the waves have already picked up early Monday. Wave heights should be around 18 to 23 feet in Cook County. Identifed vulnerable spots: the Lake Shore bike path and parts of South Lake Shore Drive, all piers (uh oh Navy Pier...) and "breakwalls that extend into the lake." Oh and if you live by the lake, back away slowly.

For Tuesday, Navy Pier will be open, but Pier Park and outside areas on the East End of the pier will be closed.

The CTA tweeted Monday evening that they are prepared to reroute transit if needed, due to a lake shore flood warning and wind advisory; city officials announced that they're prepared to close Lake Shore Drive if needed.

- If you're planning on watching Jimmy Kimmel tonight, think again: The late-night host has cancelled the first of his week of live shows from Brooklyn. Jimmy Fallon and David Letterman's shows will continue on--though without studio audiences, which might be interesting to watch.

And for up-to-date coverage of how much harder it is on the East Coast: Paywalls for The New York Times and Wall Street Journal have been lifted, as have other papers like the Boston Globe and the Baltimore Sun. And here's a helpful map from our friends at WNYC of the storm moving in real time.