Maria Lourdes Franco knows how dangerous it can be for kids to walk the streets alone in her Chicago neighborhood — especially on their way to school.

“My kids have been followed,” Franco said in Spanish, recalling the anguish she felt waiting for her two older boys to return home. “They have come home running and running because cars pass by [shouting], ‘What gang are you with?’ If you answer, they follow you. And if you don’t answer, they follow you even more. We are afraid.”

Franco and nine other moms on the city’s Southwest Side are trying to change that.

After dropping her youngest daughter off at Columbia Explorers Academy in the Brighton Park neighborhood each morning, Franco switches hats. She goes from full-time mom to running the school’s mother’s patrol group — also known as madres patrulleras.

The moms put on fluorescent vests and stand on key corners around the school. In her role as coordinator, Franco knows which mother is doing safety rounds on a bike and which parent is standing by the alley, keeping an eye out for anyone who looks suspicious.

They have made it their job — their mission — to keep children safe as they head to and from school in their struggling, mostly Latino community.

“I wanted to join because on our way to school, I saw a lot of girls alone,” Evelia Fonseca, one of the moms, said in Spanish. “Little girls in third grade just like my own daughter. I asked myself, ‘How are they allowed to walk alone?’”

They are out every day, before and after classes, whether it’s freezing cold or 90 degrees.

They keep an eye out for gang members and help students cross dangerous intersections. The school is on busy South Kedzie Avenue, where young kids have to dodge semi-trucks and impatient drivers to get to school.

They know their Brighton Park community and its challenges well. But they don’t let the fear stop them.

A few miles east of Columbia Explorers, at Hedges Elementary in the Back of the Yards neighborhood, moms are outfitted in the same bright yellow vests, with whistles hanging over their shoulders in case of emergencies. 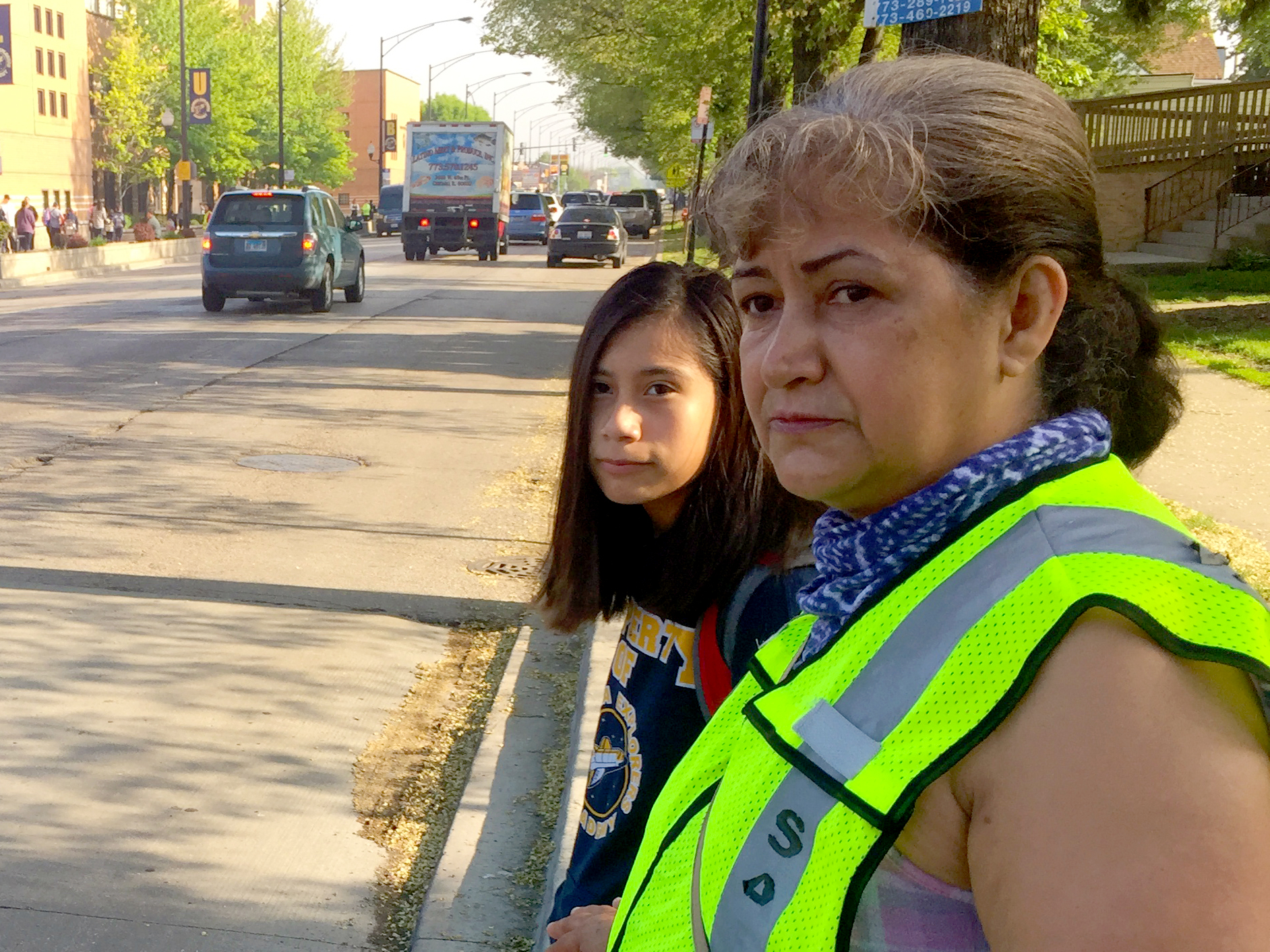 On a recent afternoon, she approached a former student standing across from the school talking to a few eighth-graders. Alonso fears this former student could be connected to a local gang.

She doesn’t want him to come around during dismissal. She wants him to understand the danger to himself and all the kids outside —  including his friends.

“Because you are not from our school and you stand here, anybody else [who] comes by and they see you, they might try to get at you,” Alonso said. “So instead of [getting] you, they might hurt one of my kids.”

She explains how simply being near him could tar a student’s reputation.

When the moms on patrol are out, the students feel safe. But that changes when everyone is gone.

“When no one is around, it’s not safe to walk around the area,” said Jordan Torres, a Hedges eighth-grader.

“It’s harder for us young kids to come around, to come to somebody’s house,” added a student from nearby Richards High School who asked WBEZ to protect his identity. “Let’s just say I wanted to go over to this house, I can’t because it’s too dangerous. They could come out and shoot.”

It’s hard to know how many mom patrol groups exist in in the city. Some were organized by local grassroots organizations or moms themselves years ago. Chicago Public Schools has a similar school safety initiative. Through its Safe Passage program, the district hires workers to look after students at 159 schools across the city. These workers get paid $10.50 an hour.

The madres patrulleras at Hedges and Columbia Explorers do not get paid. But they get something else in return.

“As a mom patroller, I’ve gotten to know people that I can count on. When we do not see each other here at school, we are seeing each other at a party for one of our kids,” Franco said. “We live nearby, we hang out, our kids know each other.”

You can find these moms everywhere at their schools: at events handing out popcorn, putting up decorations, or fighting to get a new stop sign.

But they are not your typical PTA. Instead, they chose to face down the realities of neighborhood violence —  all in the name of making sure students are safe as they walk to and from school.