At Lincoln Park’s Dank Haus, Erwin Lickmann  and I slowly walk into a crimson walled room. He whispers as he shows me a giant 19th century portrait of Germany’s first leader, Kaiser Wilhelm I. Lickman is dressed in pea green lederhosen and he tells me the Dank is more than a refuge for older Germans who want to engage in their culture

“The Dank Haus is a community of serving people,” he says “Sports brings people together. And they can have a beer afterwards and be happy, you know. Builds friendships!”

The Dank Haus was founded in 1959 as a haven for Germans, a place where they could celebrate their heritage and their culture. Next week, it’ll welcome hundreds who’ll pack the place to watch the World Cup. On this day, around two dozen senior citizens listen to Dank member Sara Hartig read a German poem. Many of them, like Gerhard Grieff, came after World War II.

“I emigrated from Germany in 1952 because Germany after the war was bad,” says Greiff. “Living over there, we didn’t have much of a future there when I was young. So I came over here and stayed here.”

It wasn’t easy here either, being German in America after the war. That made places like the Dank Haus all the more important for German Americans.  Over the years the community assimilated. Sarah Hartig has been with the Dank for decades and wonders about its future. None of her six children are involved in the cultural center.

“It’s going to be more American. English is spoken at all the meetings,” says Hartig. “When we started everything was spoken in German. We’re getting older, young people came in and they started speaking English.”

I asked how she felt about that. “I’m going along” she sighs.

Today, German traditions are alive and well, celebrated by Germans and non-Germans alike. There are two main festivals in Chicago each year: Oktoberfest in the fall and Maifest in late spring. This year in addition to the traditional German songs and suds, talk at the festival turned to the World Cup.

Anna Liese and Rafael Vasquez have a bit of a problem as the games approach. She’s German and he’s Mexican. Anna Liese was raised with a strong sense of German pride. She’s dressed in a dirndl costume, speaks German and Spanish. She met her husband more than 40 years ago in Mexico.

“Of course my father was a little upset. But after many years, he was at peace with it,” Liese says. 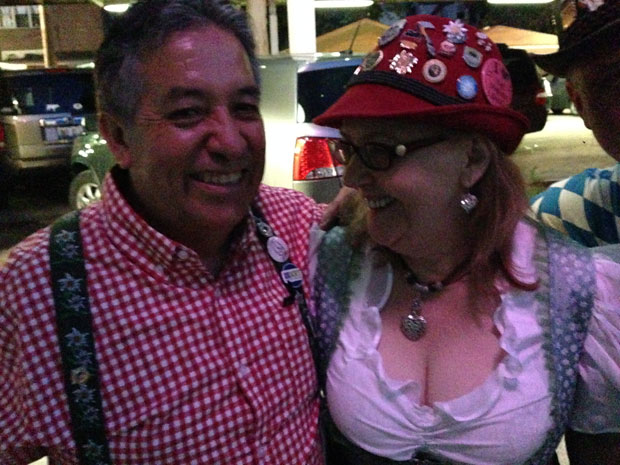 Her husband Rafael, dressed in lederhosen, passes around shots of apfelkorn better known as apple schnapps.

“She cooks Mexican food. She liked soccer, she drinks beer. What else could I want?,” he says. “I won the lottery!”

Vasquez says you don’t have to belong to one nationality to enjoy what another one can bring. But he’s not planning to root for Germany in the World Cup. He’s supporting his home country.

If Mexico doesn’t make it, he may want to latch himself to his wife’s team, Germany, which is favored to go much farther in the tournament.