He was born Charles Evans Jr. in 1890, the son of an Indianapolis librarian. The family moved to Chicago shortly afterward. When Chick was eight they bought a house in the sparsely-settled Rogers Park neighborhood, at 1413 West Pratt Boulevard.

That accident of geography changed the boy’s life. The house on Pratt backed up onto the Edgewater Country Club. Chick became a caddie and started playing golf. By the time he turned 16, he was a splendid player, and was already being written up in the Chicago newspapers. 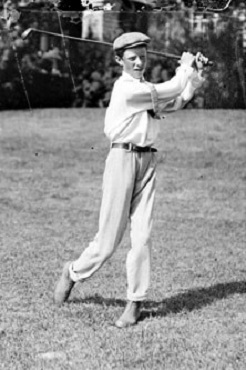 Golf was new to America in 1906. Becoming a professional wasn’t a promising career move–in earnings and status, a golf pro ranked about the level of a plumber. Evans decided to remain an amateur.

He attended Northwestern for a while, then dropped out. Evans was a cheerful, outgoing person who made friends easily. He went into the brokerage business, but continued playing golf on the side. He won a collection of second-tier tournaments.

In 1916 the kid from Edgewater became a certified golf immortal, winning both the U.S. Amateur and U.S. Open championships in the same year. Nobody had ever done that before. In the Open he set a scoring record that would last twenty years. And he did it using only seven clubs.

Evans also wrote about golf in newspapers and magazines. In 1921, a year after his second Amateur victory, he penned an autobiography. He also produced a series of golf lessons on phonograph records.

All these activities brought in money. Evans was proud of being a "gentleman golfer." Though he'd never played for prize money, now there was question whether he could keep his amateur status.

Chick's mother finally came up with a plan. Her son had been forced to drop out of college because he couldn't afford it. Why not use his golf earnings to set up a college scholarship fund for caddies?

Evans thought it was a great idea, though it took a while to convince golf officials the plan would work. In 1930 the Western Golf Association agreed to help develop the program. Since that time, over 10,000 caddies have become Evans Scholars. 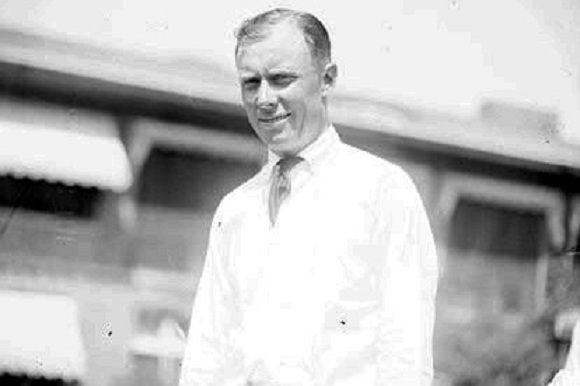 Evans took a financial beating in the 1929 market crash. Again he resisted the idea of becoming a golf pro, and took a sales job at a milk company. He continued to play in the U.S. Amateur, eventually running his string to 50 in a row.

I met Chick Evans once. It was sometime during the 1960s at the Columbus Park Golf Course. He was practicing chip shots. I still don’t know what he was doing there. But somebody recognized him, and a dozen or so of us teenagers went over to meet him.

He was very gracious. He signed our scorecards and talked to us at length, asking each of us questions about ourselves and our golf games. He was everything that I’d hoped Chick Evans would be.

His farewell to golf was suitably dramatic. In 1978 he was finishing up a round at the Glenview Club. Evans was frail and nearly 88 years old, but he managed to put his second shot on the home hole about 25 yards short of the green. Then he pitched in for a birdie.

He died the next year. But the Evans Scholarships continue. And the county forest preserve course in Morton Grove is now named the Chick Evans Golf Course.