On April 16, 1958—55 years ago today—Mayor Richard J. Daley dedicated the latest and greatest of his public works projects. Chicago now at its first modern toll highway, the Calumet Skyway.

Construction took two years and cost $101 million (about $850 million in today’s money). The elevated highway ran 7.5 miles southeast along the Pennsylvania Railroad embankment, from State-66th to the Indiana border, where there was a direct connection with the Indiana Tollway. The speed limit was 50, and the toll was 25 cents. 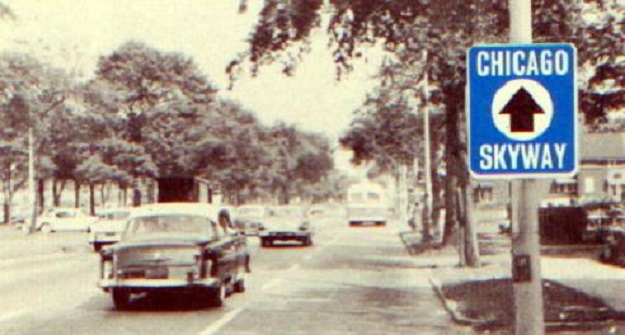 The morning’s ceremonies began at the Indiana end at 10:45 a.m. With 400 dignitaries and invited guests on hand, Daley and Indiana’s lieutenant governor cut the ribbon. Then the toll barriers were raised.

First vehicle on the new road was a school bus carrying 31 students and two teachers from Neil Elementary School. A 5th grade class from the school wrote to the mayor asking for the honor. The official motorcade followed. They all stopped at the 86th Street Toll Plaza for another ceremony. Finally, with all the speeches and pictures taken care of, the Skyway opened to the public. 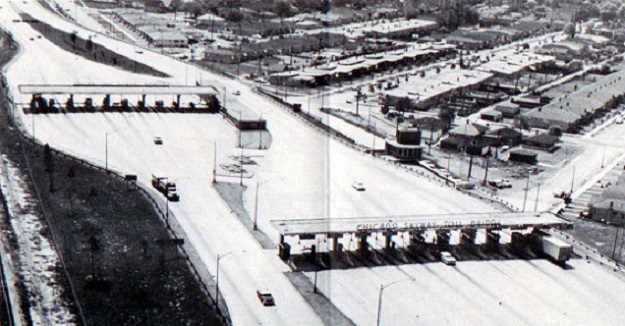 At a luncheon that afternoon, Daley thanked all those who had worked on the project. He called the Skyway “a monument to the I Will spirit of Chicago [that] rebuilt the city after it was destroyed by the great fire of 1871.”

The new road was part of the toll highway route being built between New York and Chicago. County Board President Dan Ryan noted that the city was hard at work on its own network of expressways. One day a motorist might be able to drive from the Loop to Manhattan without stopping for a single red light.
The Calumet Skyway was soon renamed the Chicago Skyway. The road was heavily used until I-94 was built. That was a free expressway, and traffic on the Skyway plummeted. In 2005 the city leased its white-elephant toll road to a private company. 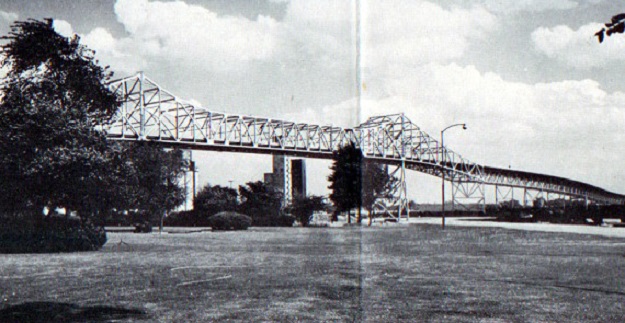 Technically, the Skyway is not a toll road. When the project got underway, someone discovered that the City of Chicago did not have the legal power to build toll highways. However, the city did have the right to operate toll bridges.

The new road had a high-level bridge over the Calumet River. That solved the problem. The Skyway was officially designated a toll bridge–with very long approach ramps.

Maybe we should change that “I Will” slogan to “I Will Find a Loophole.”