Red and white flags are waving from cars across Chicago as Polish Roman Catholics continue to celebrate the canonization of the first Polish pontiff.

Pope Francis declared Popes John Paul II and John XXIII saints Sunday in Rome in a solemn ceremony attended by millions. Many more watched on TVs and Internet streams around the world. It was the first time two popes became saints on the same day.

It was an especially big deal for Polish Catholics in Chicago: Pope John Paul II was both the first Polish pontiff, and the first to visit Chicago.

Poles came out by the thousands Saturday and Sunday for special masses, vigils, concerts, museum exhibits and marches across greater Chicago.

At Five Holy Martyrs Church on the South Side, people started gathering more than four hours before the canonization ceremony, which began at 3 a.m. Chicago time. They prayed the rosary and listened to performances by several Polish Highlander groups, including excerpts from an opera about Pope John Paul II.

Karolina Nowobilska, 14, sang a solo in front of the packed church. She said she was calm until she finished.

“When I got back into the pew, I went by my parents and I just started crying because I got so emotional that I got to sing,” she said. “It’s a huge event that won’t happen in my lifetime or maybe ... generations to come.”

Maggie Strzelec, 22, said she felt Pope John Paul II was the first pontiff to reach out to young people around the world, and it changed how people viewed Poles -- and how Poles viewed themselves.

“There was no more embarrassment, or no more comments or stereotypical comments,” she said. “I think it made everybody so proud to be Polish.”

Hundreds of Polish Catholics marched up Milwaukee Avenue Sunday, from Holy Trinity Polish Church to St. Hyacinth Basilica, praying and singing. They arrived at their destination, waving Polish and Vatican flags, as church bells rang. Several people carried images of Pope John Paul II as they filed inside for mass.

Natalie Gebala of Mount Prospect attended an overnight vigil in Des Plaines, then marched in the pilgrimage. She got about three hours of sleep between events.

“It was very tiring, and I have blisters on my feet. My muscles ache,” she said. “But it was so worth it because it was such a beautiful unifying experience, and I feel like it was unforgettable. I feel like he brought religion and goodness together. I feel like that’s going to maybe deepen people’s faith.” 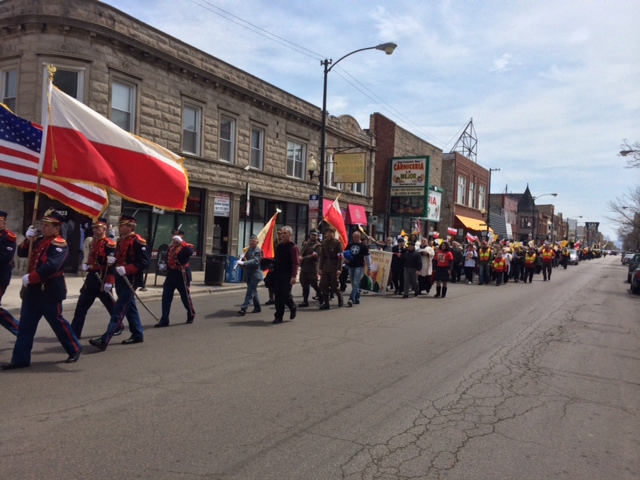 Pope John Paul II visited Chicago in 1979 and held a huge mass that filled Grant Park. He also held a service at Five Holy Martyrs. An estimated 10,000 came, spilling out of the church parking lot and onto nearby rooftops. The church still has both the wooden chair he sat in and the altar, which they’re restoring as a shrine.

Mark Wojciechowski from the Back of the Yards neighborhood was just a kid at the time, but he remembers that day well.

“Waking up, your whole family being so proud, and no matter what, whether it was going to rain or shine, you were going to be there. It’s just one of those things that’s beautiful, you can always say you lived to be a saint.”

Like many Polish Catholics gathered this weekend, Wojciechowski said he already knew in his heart that Pope John Paul II was a saint, and the ceremony just made it official.

Jozef Bafia, a Polish radio host who helped organized the vigil at Five Holy Martyrs, had a third row seat at that Holy Martyrs mass. He met the pope several times.

“When he was here first time in 1979, Poland was behind the Iron Curtain, communism rules: You can’t do this, you can’t go there,” Bafia said. “Poland got free without bloodshed, without shots. I know Pope John Paul II, holy father, he was that big fire for that. Now he’s a saint. Saint John Paul II. He’s going to be with me for the rest of my life.

Not everyone was satisfied with the focus on John Paul II. Barb Smith, who attended mass Sunday night at Holy Name Cathedral, thought the occasion was exciting and historic. But she  wanted Pope John XXIII, known as a progressive who worked to modernize the church, to get equal billing.

“I just thought he was the best,” Smith said, adding Pope John XXIII had an “unblemished record.” She said she felt Pope John Paul II’s record was tarnished by his conservatism and the priest sex abuse scandal.

But Smith said she also thought Pope John Paul II had cleared those “blemishes” with the way he reached out to people, especially the young, and the way he so publicly suffered Parkinson’s disease late in life.

Smith had visited Rome to see Pope John Paul II. She brought his photos with her Sunday, hoping to show her priest.

Lynette Kalsnes is a WBEZ producer/reporter covering religion and culture. Follow her @LynetteKalsnes.