In the shadow of Midway Airport, Latino, black, white and Arab families live in the bungalow belt of the Southwest Side.

Yet, quietly but in plain view, part of Chicago’s thriving drug trade operates here. Local and federal law enforcement officials have raided a small number of these residences as places that store significant loads of drugs.

WBEZ surveyed major drug and money busts over the last five years in the metropolitan area. We found 97 homes where law enforcement allegedly found narcotics. Thirty were on the Southwest Side of Chicago and another 20 were in the southwest suburbs. No other area had more reported drug busts.

Chart: Where are Chicago's drug houses?

In September, Chicago police allegedly confiscated $10 million worth of heroin and cocaine from a house in the 3800 block of West 63rd Place.

“I know something was wrong in the house because only men lived there,” said a neighbor on the block who said he’s afraid to give his name.

It wasn’t just that only men lived in the rented home. Over a few months, the neighbor noticed several cars parked out front with temporary license plates. But the men didn’t cause obvious  trouble, the man said. They sometimes spoke pleasantries to him in Spanish; so he didn’t call the police.

“Because they don’t make noise, no fights, no loud music,” the man said.

And thus he was surprised when police stormed the house one September weekday morning.

“That day I was opening my garage to clean it up a little bit. I hear a noise like they pull a big garbage can or something like that. I look around and I don’t see nothing. I come inside and I ask my wife, did you hear something? She said no. I looked through my window and I see a lot of police, detectives or narcotics,” the neighbor said.

Whole neighborhoods of the Southwest Side are relatively crime free. Cicero, Harlem and Pulaski are major thoroughfares for trucks transporting merchandise. There’s easy access to highways and a major railroad transfer station. Ease of transportation is one reason drug cartels are so invested in Chicago.

Nick Roti, chief of organized crime for the Chicago Police Department, said drug trafficking organizations deliberately operate on the Southwest Side -- many workers in the business have connections to Mexico, so they can blend in more easily in neighborhoods among Latinos. And in areas where they can fly under the radar.

“They don’t want to have a large police presence where there are a lot of shootings or gang activity where there’s going to be a heightened sense of police awareness,” Roti said.

The rented homes are for storage. Drugs aren’t manufactured or sold in these stash houses. Roti said that’s not what neighbors should look out for.

Jack Riley, the special agent in charge of the Drug Enforcement Administration’s Chicago office, explains it further. He said often people who are in the heroin trade don’t even grasp,  say, the Sinaloa Mexican cartel - the organization Riley’s doggedly trying to dismantle. Its leader El Chapo Guzman is considered the world’s most powerful drug trafficker.

Many of the men caught in the Southwest Side Chicago drug busts have been recruited to to bring heroin and drugs from their home country. 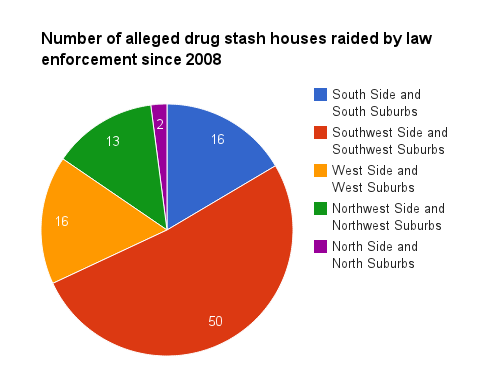 Source: For this chart, WBEZ identified the major drug seizures in the Chicago area since 2008, based on a survey of all press releases from the Chicago Police Department and the Chicago offices of the Drug Enforcement Agency, FBI and the U.S. Department of Justice. In these major busts, the drugs seized were worth at least $400,000, and often worth tens of millions of dollars.  From this list, WBEZ looked through court records and official releases to identify the residences that were allegedly used to store large quantities of illegal drugs before they were moved to street-level dealers.

“This happens all the time,” Riley said. “We’ll arrest a Mexican national and he’ll say well, my uncle who lives in El Paso asked me to do this. There’s no clear understanding that they’re working for Sinaloa. They don’t walk around with cards that say you’re a card-carrying member of Sinaloa. That’s how we have to make these connections from intelligence information, from telephone numbers.”

Of course, drug trafficking and sales aren’t unique to Latino neighborhoods -- they happen throughout the city and suburbs. And in many places both traffickers and neighbors haven’t always connected the dots.

That’s certainly true among many families on the Southwest Side. Even some of the large busts haven’t grabbed the attention from law-abiding residents. And police officers say it hasn’t been an issue in community meetings.

On the 6500 block of West 63rd Place in the Clearing neighborhood, a senior citizen woman dutifully tends to her grass one sunny October afternoon. A few days earlier, Chicago police arrested three men, recovered four guns and more than $1 million in narcotics on this very block.

“Clearly someone on this block was paying attention and noticed it. That’s neighborly love right there,” said 24-year-old Cassie Conkel who wasn’t rattled by the raid on the block on which she grew up and still lives. She said people on the quiet, well-manicured block look out for each other - even though many didn’t know the men who lived in the raided home.

After news of the narcotics, Conkel says there was buzz among neighbors, but then it was business as usual.

“I don’t really think about the cartels being up here and stuff like that,” said Conkel, adding that’s because she’s not in Mexico and doesn’t think the violence will come here.

“This is a quiet neighborhood for the most part. You get fights and parties and all that stuff. It’s not something we’ve ever had to worry about. When someone brings it up, and says, well, the cartels are here, then I’ll worry about it. I can only worry about what I can see,” Conkel said.

Three years ago, extreme drug violence did briefly rattle a quiet Chicago Lawn block. Four men were shot execution style. They were discovered bound with duct tape and lying face down, reports said. The FBI and DEA were brought in because narcotics were involved.

Chief Roti, of the Chicago Police Department, remembers that case and says the shooters were caught. More important, he says,  that type of violence isn’t the norm.

“The cartel-related violence that we’ve seen in the last few years in Mexico, I don’t think we’ll ever see that here. Not only because they don’t want it to happen here because it would hurt their business, but because law enforcement is vastly different. I don’t think it’s a major safety issue for people who live in that area. I have not seen any real violence that occurred outside of the circle of people involved in this related activity,” Roti said.

Still, the man who lives on the block where the $10 million drug bust went down is now rethinking his role as a neighbor.

Despite not knowing the criminal activity at the time, he wishes he had called the police when he felt something odd. Now he’s telling his neighbors to do just that.

And he says the narcotics raid right on his block has him considering bringing back the defunct block club.

Natalie Moore is a WBEZ reporter. She can be reached at nmoore@wbez.org or on Google+ and Twitter.