Jeanette Alcraz’s son Noah couldn’t wait to start preschool last month at Telpochcalli Elementary, a Chicago public school in the city’s Little Village neighborhood. But when they got there, the principal told them the class was over enrolled.

“She told me she was really sorry, that it was part of the system of CPS, that they maybe got confused or something,” Alcraz said.

The principal recommended Alcraz try next door at Saucedo Elementary, her second choice when she applied through the city’s new centralized enrollment process. It was set up last year to try to draw more kids into public preschools, especially low-income families like Alcraz’s, while streamlining the process to make it easier for everyone.

“They didn’t have his name either,” Alcraz said, adding that she began to consider skipping preschool altogether because of the hassle.

Noah eventually got a spot in Saucedo, but his mother went through a lot of confusion and frustration before she could see that happen. And she wasn’t the only one.

Over the summer, the city announced what it billed as improvements to its year-old centralized, online application system. But the rollout this fall backfired in many corners of the city, parents and Chicago Public Schools preschool teachers told WBEZ. They say the application process was overly complicated, and it resulted in empty seats and long waiting lists on the first day of school.

This left many families and teachers scrambling at the start of the year, according to a survey conducted by the Chicago Teachers Union. Staff at about 20 percent of CPS preschools responded. The most common problems were poor communication from the main office and late or errant student rosters.

WBEZ also reached out to community groups around the city that work with parents with preschool age kids. They shared similar stories of bureaucratic snafus and misfires.

“It’s been a very stressful beginning of the year because of this, and a lot of families have indicated that they’re very frustrated,” said Vanessa Saucedo, a preschool teacher at Telpochcalli on the city’s Southwest Side.

In the past, Saucedo said she would have known who was in her class for the next school year before summer break started. That didn’t happen this year. 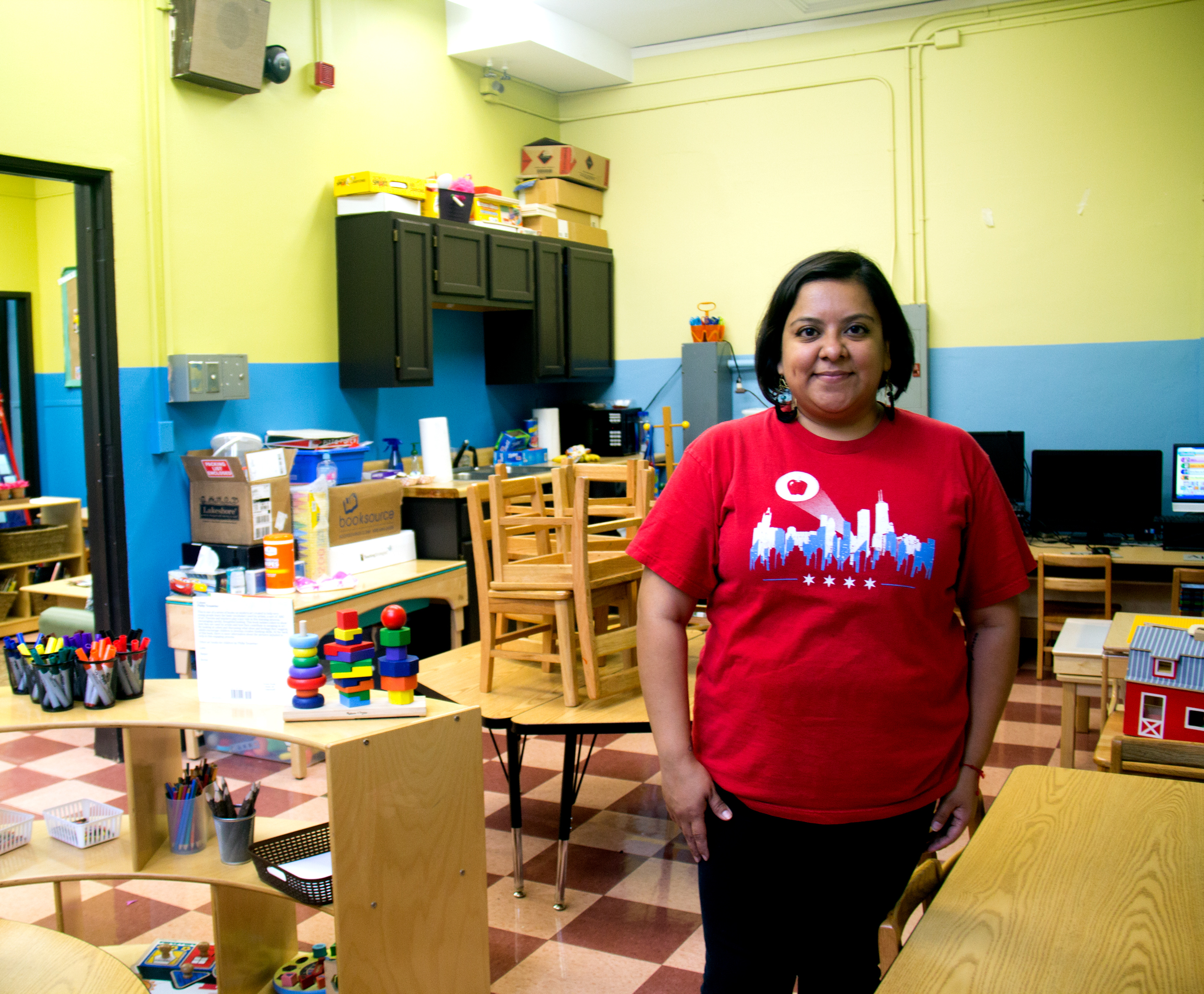 The city’s Department of Family and Support Services, which runs the preschool program along with CPS, acknowledged some errors this year. Samantha Aigner-Treworgy, director of early education policy, said a switch in technology vendors is partially to blame and the system is still being built out.

Despite that, Aigner-Treworgy defends the switch to an online system, saying it makes preschool more accessible for parents. It also makes it easier for parents to compare the quality of preschools around the city, and the number of families signing up for preschool has increased over time, according to a DFSS spokeswoman.

Aigner-Treworgy said the preschool program was 86 percent full as of the end of September, which is on track to meet or exceed last year’s enrollment. The city didn’t provide information about the total number of preschool seats available this year as compared to last year.

But even parents who didn’t encounter enrollment problems still faced a cumbersome process.

The new preschool application is online — parents used to apply at individual schools — but it also requires a lot of legwork for parents. Once CPS sends a classroom placement, parents must take that notice to one of a dozen resource centers to complete paperwork and pick up a receipt. Then, parents must take that receipt to the actual school to finish student registration.

“There are a lot of instructions and, unfortunately, not enough answers for the questions that come along with the process,” Saucedo said.

Plus, teachers like Saucedo encountered lots of glitches in the new computer system. Days before school started, Saucedo said she found out her class was over enrolled, and the school had to rescind placement. One mother had already pulled her child out of daycare.

Some schools faced under enrollment, despite a lengthy waiting list, according to WBEZ interviews with teachers and the CTU survey.

“That roster that they sent us was not ours. It didn’t even have the returning children’s names on it,” said Gloria Higgins, a teacher assistant at Hearst Elementary near Midway Airport on the Southwest Side.

Like other teachers around the city, Higgins said she worried her class could get shut down because she couldn’t easily move waiting kids into empty seats. She said she couldn’t communicate with families because the main office didn’t provide contact information. Higgins said she only had phone numbers for returning students and relied on parents to get the word out.

In Hyde Park, Carla Strickland said her 4-year-old daughter, Keira, missed the first day of preschool at Ray Elementary because of these enrollment issues. Keira ended up on a waiting list when teachers told her seats were actually available.

After a number of phone calls and emails to CPS, Strickland said Keira was able to start class on the second day. Strickland isn’t the main target for CPS’ latest preschool push — she could afford to put Keira in private preschool. But she’s a product of public schooling and wanted to give it a chance.

“The public school system can only remain strong if we believe in it and invest in it, even if it seems like a hot mess,” Strickland said.

With CPS student enrollment rapidly declining, the district runs the risk of turning off families at this crucial entry point. CPS is still reaching out to no-shows and kids still on the waiting list to fill vacancies, according to the Aigner-Treworgy.

But Saucedo said she worries some families have given up and their kids could miss the benefits of preschool.

“For the social-emotional development, the pre-literacy skills, the math skills,” Saucedo said. “And just in general, [to] try to play catch up to the higher-income families that have had access to all these great resources.”