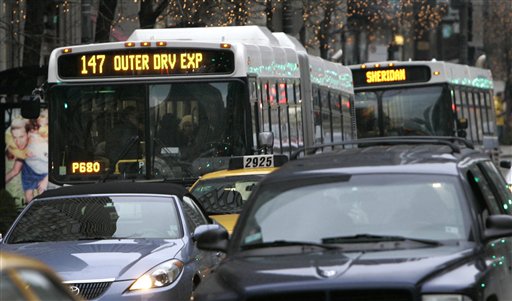 Lead story: This coming December, nearly three years after the agency’s last round of big service cuts, the CTA will attempt to balance things out a bit with a new “crowd reduction” plan. The plan calls for more trains across all lines, particularly the Blue, Brown and Red lines, and more frequent bus service on 48 routes. The trade-off: A handful of bus routes will be discontinued or will have their segments shortened (the biggest of which will be a large chunk of the #11 Lincoln Ave. route). The idea, of course, is to make you feel less sardine-like on those rush hour trains or buses. After venting about the fact that my main bus route (said #11) was being cut, I saw that this wasn’t a bad idea, actually, and makes sense. Cost saving measures will save the agency about $16 million, which will even out with the added services.

Of course, a glass-half-empty person would claim this is really the CTA trying to polish a turd. They’d point out that the new cuts leave even less service on the city's main diagonal streets. And they'd discuss how this plan still doesn’t bring services back up to where they were before the 2010 cuts, which cut out a slew of express routes, reduced hours for 40 buses, and reduced frequency on another 100 routes, so we’re still in a hole compared to service just a few years ago and paying more to ride.

But that would just be pessimist talk, right?

Also: No matter what spin you hear on positive momentum in talks between the teachers union and the city, make no mistake: we are most likely heading for a teacher’s strike. Last night, CTU delegates voted to give CTU president Karen Lewis the authority to issue the required ten-day notice for a strike (authority our intrepid education reporters noted she already had) whenever she deems fit as well as vote on a contingency plan in the event a strike is called. Meanwhile, the Board of Education approved its budget plan. The two sides are scheduled to hold an open-ended negotiating session Friday, but it’s looking all for naught as a strike looms less than two weeks before the remainder of CPS schools are slated to open their doors for the new school year.

And then: Birds of a feather do flock together. Our crazy uncle Rep. Joe Walsh, who knows plenty about saying outlandish things to the press, has now come to the defense of Rep. Todd “uteruses are magic” Akin. Though Walsh said Akin’s comments were “offensive, insulting, and wrong,” he wondered aloud why the national GOP decided to "pile on" the Missouri rep who's currently running for Senate. Walsh added, “And I’m bothered by the silence of members of our own party to stand up for him.” Well, that probably has to do with him being complete political kryptonite, kind of like Walsh is at this moment. Because according to Walsh, Rep. Akin deserves a defense; but Tammy Duckworth, Walsh's opponent in the new 8th Congressional District — who also happened to lose both of her legs while serving her country as a Blackhawk pilot in Iraq — is just a glory hog.

RIP: Tony Nicklinson, a British man suffering from “locked-in syndrome,” died yesterday of natural causes just a week after losing a legal battle that would grant him access to an assisted suicide. He was 58.

Finally
I know I’ve made a big deal about the Curiosity rover landing on Mars but that’s because it is a big deal. You know what’s an even bigger deal? This amazing video made up of hundreds of images from the rover’s landing. Let me repeat that in bold for emphasis: Below you will find actual images of a NASA vehicle landing on Mars. If this video and the fact we have a rover on Mars shooting laser beams into rocks doesn’t completely make your mind melt from awesomeness and the sheer improbability of it all, I don’t know what else to tell you.