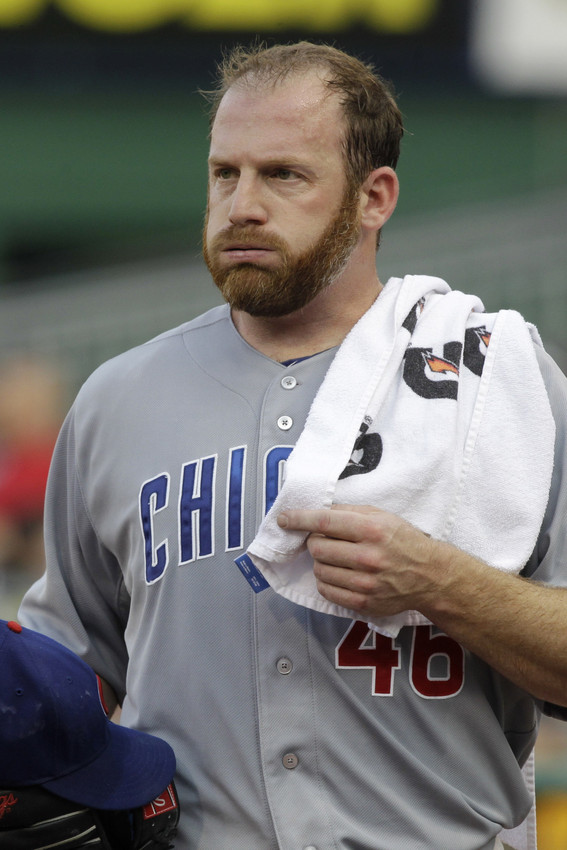 It was a bizarre evening at Wrigley. When all the smoke cleared, players were saying goodbye in the dugout while others that have been expected to be traded are still Cubs...for now. The baseball trading deadline is 3 p.m. and the Cubs have more possible deals to make. The White Sox made three moves the past few weeks so they may be silent…but you never know.

Cubs wheel and deal into the night

There has been a lot of talk swirling around the Cubs' two pitchers Ryan Dempster and Matt Garza. But the first pitcher to go was lefty Paul Maholm, he and utility outfielder Reed Johnson went to Atlanta. In exchange, the Cubs picked up two pitching prospects: Arodys Vizcaino and Jaye Chapman. The other move was catcher Geovany Soto going to Texas for minor league pitcher Jacob Brigham. Johnson and Soto were pulled during the fifth inning with the game in progress last night against the Pirates. Their now-former teammates warmly said goodbye in the dug-out.

As to Garza and Dempster, there still is interest and some trades may yet occur.

In the Ryan Dempster situation, it has been no secret he was a player that the team seemed confident to make a deal with since he has been outstanding on the mound. He still has a very attractive ERA and his veteran leadership has been a plus. Because Dempster is a five and ten player (ten years in the majors and five with the same team) he has every right to accept or reject a trade. Here is a trivia note, who was the first player to exercise that right? Recent Hall of Fame inductee Ron Santo, in 1974, rejected a deal to play for the Angels and wound up accepting a trade to the White Sox. Santo had that right and took advantage of it.

Dempster was apparently dealt to Atlanta, but the murky circumstances of how he found out and the specific details of what happened are unknown. What is known is he rejected the deal and now he is still in Chicago. His desired destination was the Los Angeles Dodgers and that has not materialized.

So now what? Dempster is scheduled to pitch tonight and the Cubs may be “stuck” with him unless he can clear waivers Auguest 31st (which is very hard to do) and are able to deal him. What could happen is he may remain a Cub until the end of the season. Dempster will be a free agent and the Cubs can make a qualifying offer. If he turns it down then the Cubs get what they really covet: a high draft pick. That pick is gold and something the team’s management will not look at as a loss. Unless . . . Dempster accepts the offer and he remains a Cub. Yes…it does sound like this situation is going in circles.

Now what? Dempster’s rejection of the Braves trade has the fans assaulting him on social media and other outlets. Even though he said he understood reactions, he said the fans he has encountered have not leveled angry sentiments. It has to hurt Dempster since he is one of the players that have been entrenched in the Chicago community and even lives just a few blocks from Wrigley.

There has been plenty of interest in Garza since his age (28) and his contract make him desirable. However, he recently developed an upper arm injury and even though his MRI came back with no damage he has not pitched since July 21st. There has been improvement with his injury and he may get a start very soon.

Lots of players are coming and going and it will be up to Manager Dale Sveum trying to put a team on the field with what appears to be a very, very young roster.

With a team trying to stay on top of the AL Central, the White Sox did what they could with little or no major disruption to the Major League roster. General Manager Ken Williams made three deals that bolster his roster without adding much to his slender payroll. Now the question is did he do enough to keep them in contention?

None of the players were at the top of their respective games but they all three had some good play during their careers.

The deal for third baseman Kevin Youkilis has paid off with his defensive play and some timely hitting.

The rookie bullpen was starting to wilt since none of them had the experience to handle the rigors of playing in the major leagues for a contending team. Williams went out and grabbed veteran lefty Brett Myers from Houston. The beleaguered Astros have been having a fire sale so that was an easy “get.”

Without the players to get a top-notch starter, like Zack Greinke, the Sox did something unexpected. They traded within their division. Late Saturday night the Sox got starting left-hander Francisco Liriano from the Minnesota Twins. There have been some concerns that young Chris Sale has a “tired” arm and needs more rest between starts and John Danks may not be pitching for quite a while. Liriano has been good and bad at times this season, so the White Sox hope he'll feel energized going to a new team—just like Youkilis.

If these moves help the White Sox see post-season action for the first time since 2008, it may earn GM Williams “Executive of the Year” honors. If not, he does get credit for giving it a shot. With just hours left before the deadline is Williams finished with his moves?