CHICAGO (AP) — Miguel Montero delivered a memorable swing, Javier Baez stole home with his daring dash down the line and Jon Lester turned in another steady performance on the mound.

It all added up to another dramatic victory for the Chicago Cubs, who are off and running in the NL Championship Series.

Montero snapped an eighth-inning tie with the third pinch-hit grand slam in postseason history, and Chicago beat the Los Angeles Dodgers 8-4 in the opener Saturday night, moving the Cubs a step closer to their first pennant in 71 years.

"We hang in there," Cubs manager Joe Maddon said. "We don't give up."

Game 2 is Sunday night, with the Dodgers once again in need of a clutch performance from ace Clayton Kershaw. Major league ERA leader Kyle Hendricks pitches for the Cubs, chasing their first World Series title since 1908. 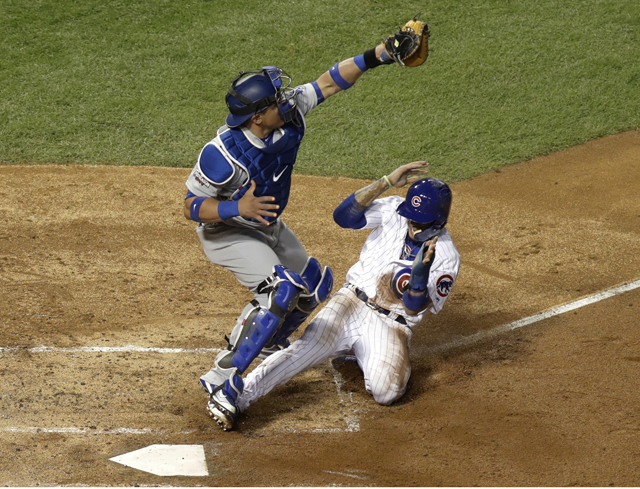 The Cubs pulled out 14 of their major league-best 103 wins this season in their final at-bat. They added two more in the Division Series against playoff-tested San Francisco, including a four-run ninth in the clinching Game 4.

"We've kind of proved we can overcome adversity in the game," slugger Kris Bryant said.

Chicago was swept by the New York Mets in last year's NLCS. Lester & Co. are back again and already in better shape following a crazy eighth inning.

In the top half, Gonzalez tied it at 3 with a two-out, two-run single off Aroldis Chapman.

Zobrist hit a leadoff double in the bottom of the inning before pinch-hitter Chris Coghlan was intentionally walked with runners at first and second and two outs, bringing up Chapman's spot in the batting order.

"That was the right thing to do," Maddon said. "I probably would have done the same thing." 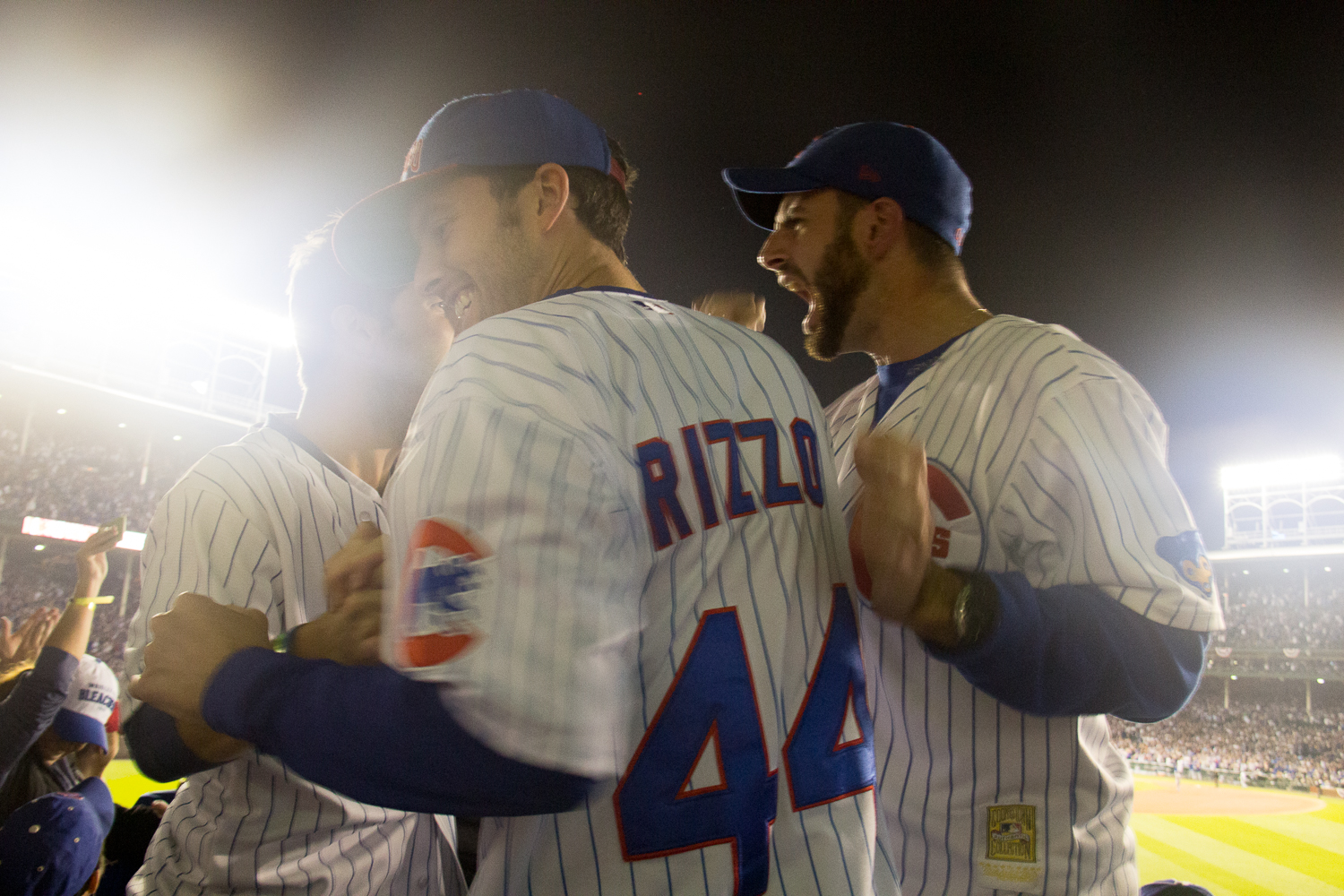 Maddon sent up Montero, who drove an 0-2 slider from loser Joe Blanton halfway up the right-field bleachers for his first hit of the playoffs.

"I trust Joe. I've trusted him all year long. He's been great for us," Dodgers manager Dave Roberts said. "Left a pitch up. ... It just didn't work out."

The crowd of 42,376 at Wrigley Field roared as Montero rounded the bases and kept cheering until the veteran catcher popped out of the dugout for a curtain call.

"I never even thought I was going to hit at that point," Montero said. "To be honest, I thought Maddon put me out there just to bring the lefty and get (Willson) Contreras to pinch-hit for me, and they didn't bring the lefty for Contreras."

Fowler homered on the next pitch as the Cubs rebounded quickly from a shaky bullpen performance. Hector Rondon allowed Andrew Toles' RBI double in the ninth before Chase Utley lined into a game-ending double play.

Chapman retired Yasmani Grandal on an inning-ending groundout in the eighth and was credited with the win.

"We'll be ready tomorrow," Gonzalez said. "This game gave us a lot of confidence. We know we can beat them."

Lester and Baez helped Chicago to a 3-1 lead after seven. But the Dodgers rallied in the eighth, prompting Maddon to go to Chapman with the bases loaded and no outs.

The lefty struck out Corey Seager and Yasiel Puig before Gonzalez lined a 102 mph fastball back up the middle. A pumped-up Gonzalez celebrated at first base after delivering Los Angeles' first hit in 12 at-bats with the bases loaded in these playoffs. 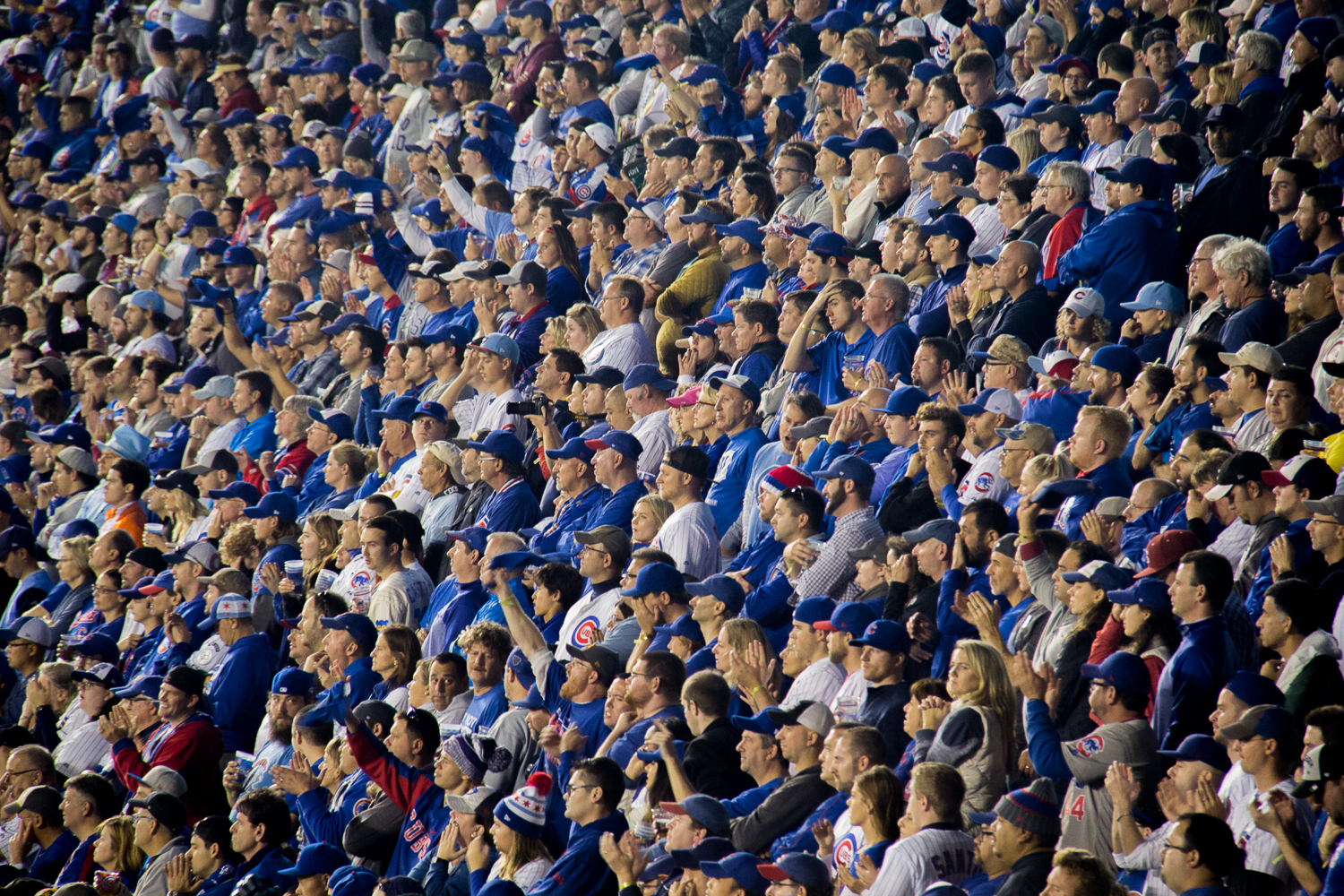 But everything changed in the bottom half, leaving both managers to answer for several difficult decisions. Lester was replaced by a pinch hitter after just 77 pitches, and the intentional walk to Coghlan put the go-ahead run at third.

"A lot of that stuff was preplanned," Maddon said. "You look for situations. You're looking for the right matchups. But you don't know what he's going to do. ... You have to be able to react."

Andre Ethier had a pinch-hit homer for Los Angeles, helped by a strong wind going out to left and left-center on a warm night at Wrigley Field. Kenta Maeda lasted just four innings in his fourth straight shaky outing dating to the regular season.

The last time Kershaw was on the mound, he got two outs for the save in Los Angeles' clinching Game 5 win at Washington on Thursday night. The taxing final victory over the Nationals left Roberts with few options for the NLCS opener, and the Cubs jumped on Maeda for three runs in the first two innings.

"There were a lot of pitches I left over the plate that they took advantage of," Maeda said through a translator.

Bryant drove in Fowler with an RBI double in the first. Baez, one of the breakout stars of this year's postseason, added his own run-scoring double in the second, on a blooper into center over a drawn-in infield.

Baez was on third with one out when he initially broke for the plate with Lester squaring to bunt. Lester didn't get the bunt down, and catcher Carlos Ruiz threw to third baseman Justin Turner. Baez hesitated, then kept going toward the plate. He slid in safely before Ruiz could get the tag on him.

Baez became the second player to steal home for the Cubs in a postseason game, joining Jimmy Slagle in Game 4 of the 1907 World Series, according to the Elias Sports Bureau.

"It was a safety squeeze. I went a little too early and I saw I couldn't get back," Baez said. "This is the big leagues and a rundown is too easy, so I kept going."

Montero's drive was the first go-ahead grand slam by a pinch hitter in postseason history. Mark Lewis and Ricky Ledee were the other pinch hitters to sock a playoff grand slam. Lewis connected for the Cincinnati Reds in a 1995 Division Series against the Dodgers. Ledee went deep for the New York Yankees in the 1999 ALCS vs. Boston.

Dodgers: Kershaw pitched in all three Dodgers wins during the Division Series. The three-time Cy Young Award winner is 3-6 with a 4.79 ERA in 16 playoff appearances, including 12 starts.

Cubs: Hendricks, who went 16-8 with a 2.13 ERA this season, makes his fourth career playoff start. He left his Division Series start against San Francisco after taking a line drive off his right forearm.