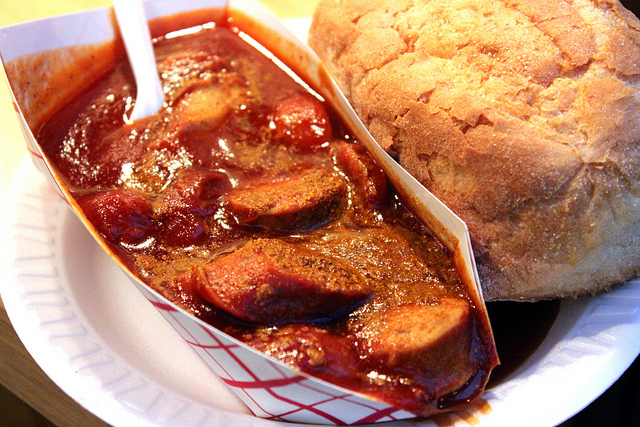 I thought this was going to be an easy food quest, finally tasting the currywurst at the Christkindlmarket in Chicago. Instead, as with most quests, it raised more questions than answers.
First, Was ist Currywurst? Easiest answer: a thick-sliced hot dog, smothered in a warm ketchupy sauce, sprinkled liberally with "curry powder." It's been called Germany's national dish, and you may recall that the Currywurst Museum opened in Berlin in 2009. But as with most national symbols, there's controversey. Some say the sausage must have casing, others say nein. Some say it should be served with fries, others say with a hard bread roll.
I say whatever is served, it should always be eaten with the signature little currywurst fork. I've eaten currywurst across Germany — from lunch food to drunk food — and to me, the little fork is as essential to the dish as a colorful palettina is to gelato, and chopsticks are to ramen.
But there was no little fork under that sauce above. 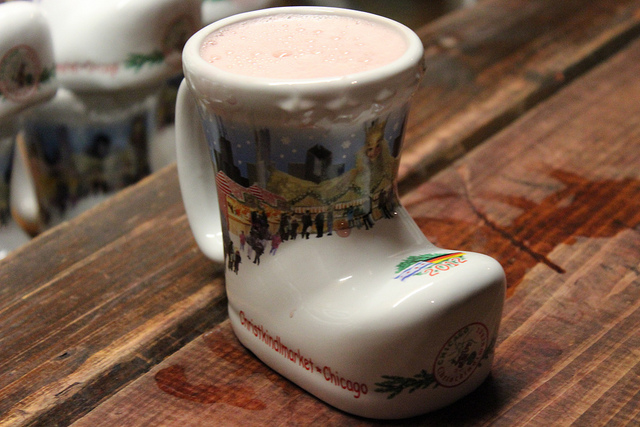 Two vendors serve currywurst this year at the Christkindlmarket. They both use bratwurst, griddled on a flattop, then sliced and added to their currywurst sauce. In Germany, the kind of sausage is another source of controversey not surprisingly, though it's usually sliced and sauced to order.
Herta Heuwer invented currywurst in 1949 in Berlin — using ketchup and curry powder from British soldiers, traded for booze, legend has it — but it remains a mystery how this unlikely flavor combination became so wildly popular, and remains so to this day.
And yes, I did say ketchup in the homeland of hot dogs.
Our friends over at Curious City recently asked and tried to answer the question: Why no ketchup on Chicago-style hot dogs? I asked my food friend Bruce Kraig, co-author of the just released Man Bites Dog: Hot Dog Culture in America, who said, "I agree with my friend Bob Schwartz that standard American tomato ketchup overwhelms the delicate balance of flavors and textures in a Chicago hot dog, but the pronouncement 'never put ketchup on a hot dog' is, I think, a marketing device promoted by Vienna Beef perhaps on the 1960s or '70s and with ever greater emphasis thereafter. This is a catchphrase that sets Chicago hot dog stand dogs and the city's own food identity (and identity in general) apart from all others."
"On the other hand," Kraig said, "Since Vienna Beef makes lots of condiments and no doubt would have been happy to sell ketchup or any other food, the no-ketchup slogan must be rooted in actual diners' preferences."
In the meantime, taste the currywurst yourself at the Christkindlmarket until Christmas Eve, and chat with some of the vendors who have been spending the holidays in our fair city every year for the 16 years of the market, ketchup or mustard notwithstanding. 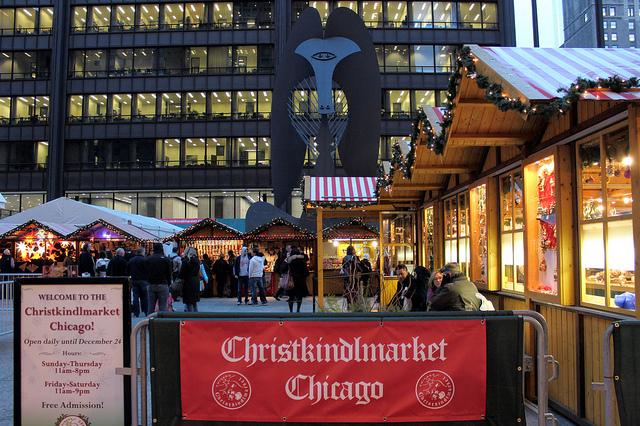