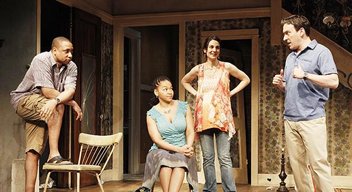 1. Tony Award nominations have been announced; Clybourne Park received four nominations, one for Best Play. Jessie Mueller got a nomination for Best Performance by an Actress in a Featured Role in a Musical for On a Clear Day You Can See Forever. Chinglish, however, was snubbed. The big (potential) winner was Once, with 11 nominations. The Regional Theater Award goes to the Shakespeare Theater Company in Washington, D.C.

2. Writers’ Theatre opens The Blonde, the Brunette and the Vengeful Redhead May 22. "Thwarted housewife Rhonda Russell loses herself in a heated moment of passion, setting into motion an unbelievable series of events that ripple through the lives of everyone around her." But what about the redhead!? I want to know.

3. the side project is taking on Joan of Arc in the World Premiere of Joan's Laughter. “Joan had always brought up vague ideas of Christian martyrdom and religious fanaticism but having come to know this Joan, I have come to admire and identify with a woman who is sure of her individual power," director Cecile Keenan said in a statement.“She is a self-motivated, empowered, modern woman and, as such, we should pay attention to her fight for individualism.”

4. Kevin McDonald of Kids in the Hall (and that episode of Friends where he plays a weird new age doctor named Guru Saj. Here's that scene in French, if you speak French and find dubbing hilarious) is performing at Chemically Imbalanced this Saturday. He "will provide the stories, and some of CIC's best performers will improvise the rest."

5. Did I know that The Iceman Cometh was extended already? If I did and wrote it here and have forgotten, excuse me. If not, there are six added performances and the show closes June 17. It officially opens this Thursday.