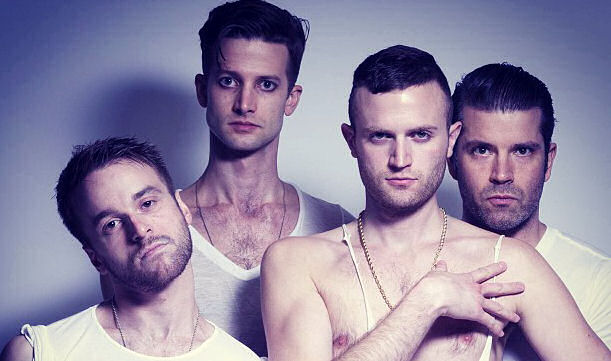 Dan Foley is someone I've been interested in sitting down for awhile for one of my fireside chats. As someone who is interested in the local queer art scene, Foley is a perfect symbol of Chicago's queer music reniassance. Ranging from the punk-rock queercore riot of The Recruitment to The Banjee Report, the city's newest queer rap sensation, Foley's work brings together the threads of what makes our music scene vibrant and vital. Foley got his start performing at Hamburger Mary's four years ago, and since then, he's worked with everyone from Big Freedia and Big Dipper to About Face Theatre, the seminal queer theatre company in Uptown.

Foley currently serves as a member of BAATHHAUS, the band that formed out of Foley's "queer electro-f*ck performance art group" and producer for Big Dipper, the local queer rapper whose work has been equated to "Nicki Minaj + a gay bear rapper" by Vice magazine. I met with Dan Foley last week at Coffee Studio, the chic Andersonville cafe that's a personal favorite of Foley's, where we chatted over coffee and croissant about Mykki Blanco, Le1f and the future of queer hip-hop. And I found out what "electro-f*ck" exactly entails. In his candid and mellifluous responses, Foley gave real talk about his already versatile career. He's proven himself one to watch.

Nico Lang: You started out performing in DAAN, the gay synth-pop trio that formed in 2009 with Jesse Young and Patrick Andrews. How did that project evolve into BAATHHAUS?

Dan Foley: From early on we always envisioned a “band” creating the music live, but never really had the time or resources to make it happen. Our shows during DAAN days were different for every event. It was like re-inventing the wheel two to four times a month. All of our headspace went into this. As we sat back during our brief hiatus last year, we decided to prioritize the live music element and codify a set so we weren’t scrambling to the last minute wiring together dryer vent hose, finding glue that could stick to skin yet not sweat off, or the cheapest fake blood deals, as fun as that all was.

NL: As DAAN was heavily anchored in performance art and the avant garde, in what ways does BAATHHAUS blend that with live performance?

DF: Our first task in the shift to BAATHHAUS was live sound generation/manipulation. We started playing everything at initial rehearsals and realized that left no room for any of the movement or performance aspects of our older shows. The challenge has been finding a happy middle ground between playing the music and fagging around, as we like to say. We are closer than we were before, but are still developing a nice fusion. With the addition of Jesse Hozeny, we were blessed with a whole new skill set and knowledge from both the show world and the “industry” in general. He comes from a band background while secretly wanting to explore the more performative side of shows while we came from the opposite side from a high-concept performance arena wanting to slide closer to what a band is. The result so far I think is this weird, interesting, and faggy in-between world. I like it.

NL: Of your inaugural tracks with BAATHHAUS (available to listen to on Soundcloud), “I Like Boys” and “Gays Are Gonna Get You” show a unique playfulness and a coy, tongue-in-cheek energy. How does that reflect the band’s artistic style?

DF: While taking our work very seriously and striving for integrity and authenticity we don’t want to take ourselves too seriously. We make shows because it’s fun and we like to dance and fag around in a place that somehow has agreed to play our music really loud. Sometimes the humor comes from a very self-aware place.

NL: Although you were very much the front man of DAAN, as its first member, BAATHHAUS is very much a team effort. What effect has the ensemble nature of the band had on your work?

DF: Although I started out as the frontman, DAAN bled into a more ensemble-focused group. It was this reality plus the desire to add instruments that led to the change. In the beginning I was generating all the music, but now every single one of us is adding to the pot or "The Vault," as we’ve started calling it. It’s also forced us to really up our game as far as keeping in communication with each other throughout the week across various technology mediums. We each have our forte that we bring to the table, but each of our own skills have been rubbing off on one another. It’s a great artist cross-pollenation of sorts. The ensemble has helped us to create pieces that integrate us fully. Everyone’s doing something.

NL: For me, the musical aesthetic of each band seems to be quite unique. How do you feel the sound has grown, as you embrace dance pop?

DF: A lot of the earlier music came out during a time when I was still teaching myself composition, engineering, and production. DAAN stuff tended to border on sound design at times. Having spent time in that world and seeing how it applies to us physically and vocally through our shows as well as watching the audience, we’ve really opted for a more conventional display of some really unconventional sounds and subject matter. There’s a lot of weird shit, but if you want people to watch it you have to show it to them in a certain way or they will go outside and smoke for 25 minutes. 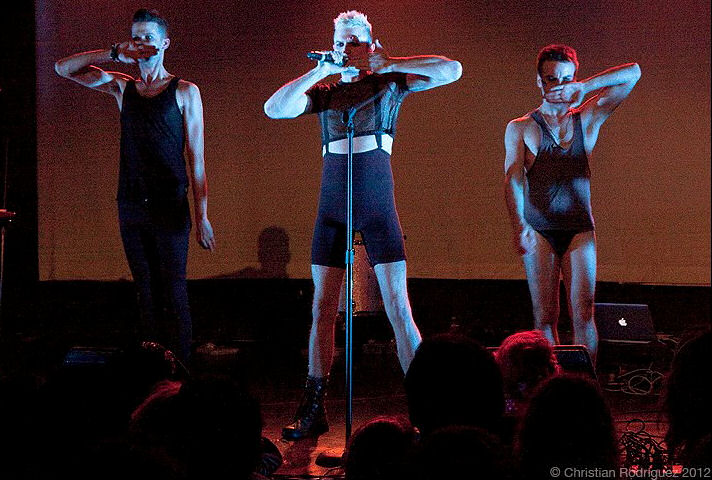 NL: Of your recent work, one track that stands out is “Cave Song,” a piece that’s almost nine minutes long. What was your process like in creating that tune?

DF: First, I’m happy to say we’ve shortened it (to) closer to five minutes. Nine minutes is a long time. Honestly, when I wrote the main bassline on my Nord I couldn’t stop listening to Robyn’s “Call Your Girlfriend.” I recorded that, built a loose timeline of the song and then just improvised vocals for the melody after hitting record. Sometime on our VH1 special, I’ll play the original rough demos and you will hear how ridiculous they lyrics are that I’m just making up. Jibber-jabber. Patrick Andrews has been developing a piece for the stage called MUSHPUSHKISSPISS. His words were lifted from those pages and made lyrics of “Cave Song.” And he wrote the vocal line for the bridge while I supplied harmonies.

As with all our songs now that we are BAATHHAUS, there are some really unique and special percussion moments thanks to Hoz, and Andrews on his own little “floating tom.” Nothing beats having Hoz in the room on drums. There are talks of doing stripped down versions of BAATHHAUS from time to time based on our spotty availability with each other, but I’d rather not do a show if Hoz isn’t there.

NL: In addition to BAATHHAUS, you are also the producer for Big Dipper, the Chicago-based bear rapper that’s made quite the viral splash in the past year. How do you feel the aesthetic you create for BAATHHAUS relates to Big Dipper’s music? You’ve described as like “wearing different hats.”

DF: I’m a big weirdo, and I’m attracted to strange and dark sounds. I tend to make everything dark or a little spooky. Working with Big Dipper has proven to be a challenge in the aspects of tone. He’s always going for something happy and upbeat. There was a time when we were working on the “Summertime Realness” synth hook when he had a Brady Bunch Movie song pulled up on his laptop and would play it really loud in the studio whenever my stuff got too dark. It was hilarious and an important exercise in flexibility and being open to ways of thinking or listening that fall outside of my everyday routines.

NL: When Big Dipper first started recording music under the Big Dipper name, he sought you out to help him find his sound. What did that entail?

DF: He wanted someone to make a beat with the loop from a song in a popular animated film. The whole project took months to complete since we both had our own projects plus work going at the same time. It was the first time I really attempted anything hip hop or rap. So I would listen to the rap music I knew and read up a little through some Google searches and just made it up as we went along. I wanted to use an 808 really bad cuz of that NWA album.

NL: Since that time, Dipper has released tunes like “Drip Drop” and “Meat Quotient” that continue to push the boundaries of his immense talent and of queer rap. How has his music evolved since that initial meeting?

DF: More than anything we have developed a really great shorthand and vocabulary in working each other. I really enjoy working for other people as it takes the onus and self-consciousness out of the process for me because it’s not about me anymore. Despite everything sounding happy all the time, it was good to really explore with him unhindered by my own bullsh*t. Since he’s moved to NYC he’s met with some very talented producers and the stuff I’ve heard is incredible. It’s always something I was excited for him to do. Maybe it’s the self-deprecating artist in me, but I always felt he might find more success with an “actual” hip hop producer, but the fact that we got away with it for so long making jams is hilarious to me.

NL: Big Dipper is one of a number of queer rappers who have emerged in the past few years as pioneers in the genre, including Le1f, Mykki Blanco and House of Ladosha. In what ways are these artists changing the face of hip-hop? Why is it important that they do?

DF: Maybe it’s because they are queer. Maybe it’s because they live in Brooklyn. But their sounds are strange and different. I see some familiar hip hop/pop structures going on in their work, but the sounds their producers are filling into the structures are not poppy and very strange. I’m in heaven. I watched a video of Mykki Blanco on a street corner in drag with a bunch of kids who were throwing shade his way. He opened his mouth and all this crazy Blanco sh*t started pouring out and the kids did a 180 and started getting real excited by her. I believe change comes for the fringes of society, or culture or whatever you want to call it. It’s exciting to hear a fresh take on things and to know that eventually the rest of the world will plug into and be obsessed with it after Madonna has started using it, all the while the queers have moved onto something else.

NL: As far as BAATHHAUS goes, where do you see the band’s development taking you? How do you hope the band will grow?

DF: We want to tour. Bad. We want to work on more ensemble generated pieces. We envision a curating arm of BAATHHAUS, DJing, physical/digital releases, remixes, collaborations, and tons of music videos. It would be awesome to have someone throw some big money at us so we can quit all our food service jobs and just make art in our underwear all day.

Dan Foley is currently working on tracks for RuPaul's Drag Race alum Dida Ritz and Shea Couleé, while Foley branches out into the world of emcee-ing and BAATHHAUS continues to book more shows. Interested in working with Foley and BAATHHAUS? They are on the lookout for more art collaborations, fashion designers and MIDI nerds. Contact them at baathhaus@gmail.com. Also make sure to check out the queer hip-hop showcase coming up on March 25 at Beauty Bar for LEXICA @ Salonathon to discover more of the city's thriving local queer hip-hop scene. There's a lot to love.