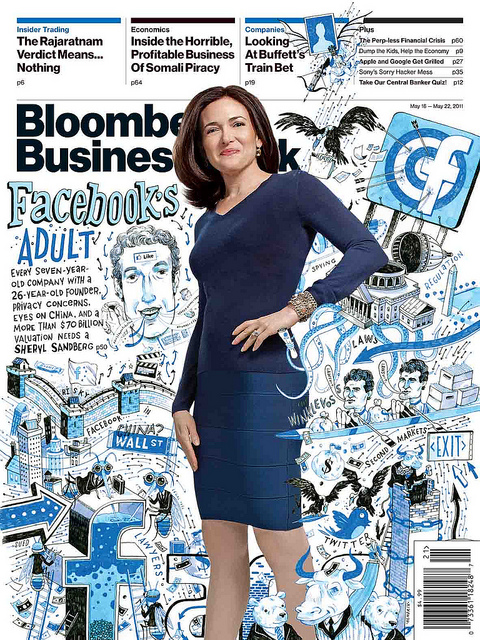 Sheryl Sandberg, COO of Facebook, and Marissa Mayer, COO of Yahoo, are arguably the youngest and most well-known females in corporate America today. In the male-dominated world of business, where only slightly more than 4 percent of Fortune 500 companies are led by women, Sandberg and Mayer are wunderkinds who achieved early success and rose to the top at a meteoric rate.

In both financial and feminist circles they are considered rock stars, trail blazers and gurus to be studied and emulated. And this dynamic duo has not been hesitant in word or deed to proclaim and demand a new set of rules for women in the workplace.

After 13 years at Google, where she was the twentieth employee hired and the first female engineer, Marissa Mayer left Google to become CEO of Yahoo in July 2012.  Her first two challenges were obvious ones:

The pregnancy issue handled itself, and on September 30, 2013, she had a baby boy.

The company's financial issues remain ongoing, and Mayer returned to work just two weeks after having the baby to give them her full attention. (She has managed to balance the financial dilemma and the demand of diapers by having a nursery built next to her office.)

Since then, she has done everything in her power to right the ship.  And her most controversial decision to date speaks directly to how she sees and wants the game to be played.  Starting this spring, “working at home” has been banned.

“We need to be one Yahoo, and that starts with physically being together”, Mayer said.

Although Yahoo’s new model has generated a considerable backlash, Mayer’s message is clear: “do as I do” or move on.

Sandberg, in her recently published book Lean In: Women, Work, and The Will To Lead offers advise about how women can advance their careers, and at the same time, admonishes women for being part of the problem of why more women are not in more leadership positions. If you want to get ahead and make it big time, says Sandberg, women need to “lean in”, assert themselves more, put in more time, take on more tasks, be more ambitious.

Yes, she says, it is a male dominated world. So work harder. Believe in yourself. Don’t doubt your ability to do it all.  Make more demands. Take on more. Sandberg argues that women have to stop looking for excuses and reasons for failure or mediocrity. Success costs, and if you don’t pay the price, it won’t happen.

I’ve got a daughter who is a business person, my wife is a COO of her firm and I like to think I’m a card carrying feminist. But to tell you the truth, Sandberg and Mayer scare me.  Or, perhaps more accurately, they confuse me. They want women to outwork the men. They are advocating putting in the big hours, and making the big compromises, so that they too can succeed on Planet Finance. But maybe they’ve all got it all wrong.  Maybe it really shouldn’t be about the big job, the big hours, the big sacrifices. Maybe it’s the system and not the players that is all screwed up. Maybe none of us, men or women, should be eager to “lean in” because the world we are being asked to “lean into” isn’t, in the long run, humanly worth it.

Maybe our two C-suite divas are on to something more important than success at work. Maybe their’s is a cautionary tale. Rather than “leaning in”, maybe all of us should start thinking about “leaning back”, and start trying to find success and accomplishments in other parts of our lives beyond our jobs.