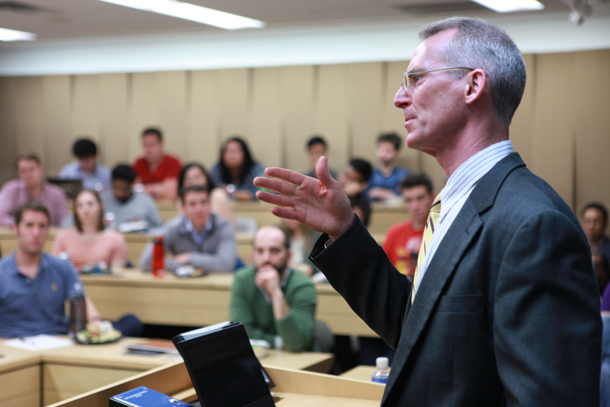 To hear former Republican Congressman Bob Inglis tell it, the Right Wing aversion to climate change policy may as well be a medical condition.

“When you mention ‘carbon,’ conservatives break out in hives,” he jokes, “and when you say ‘tax,’ they go into anaphylactic shock.”

He says this not mockingly, but by way of explanation. Despite losing his seat in South Carolina’s deeply conservative 4th Congressional District in 2010, Inglis has continued his crusade to rally conservatives around “free-market” solutions to climate change. His Energy and Enterprise Initiative at George Mason University promoted the message during a presidential campaign in which even the Democratic Party candidate tiptoed around the issue.

“Conservatives have been running from this issue and failing the country,” he said Tuesday at Northwestern University's Kellogg School of Management. “But Republicans and conservatives have the answer to this.”

His solution, first crystallized as the Raise Wages, Cut Carbon Act of 2009, is to wipe away all federal energy subsidies and hold energy companies accountable for all the hidden costs of their product. That means fossil fuel companies would pay for their carbon emissions, and coal plants would pay for the detrimental health effects of their pollution. Imported goods would pay a carbon tax equivalent to their American counterparts, unless the importing country could prove its carbon footprint was low.

What makes that politically palatable under Inglis' plan is that the new revenue it generated by essentially taxing carbon would not go to pad deficits in other governmental programs. Instead the plan would cut taxes elsewhere — social security contributions, income taxes, or corporate tax rates, for example — in a revenue-neutral swap called a Pigouvian tax.

That’s what Inglis calls “a muscular free enterprise solution,” as opposed to the “fickle tax incentives” that typically pass for market-based policies. His idea has the support of former Reagan economic advisor Art Laffer.

It’s not clear what effect his plan would have on the renewable energy industries. The markets for solar and wind power have exploded in recent years, fueled in part by the production and investment tax credits which have subsidized them since the early 1990s. The fight to renew these lifelines flares up periodically, eliciting sighs of relief when they are extended time and again. The impact of axing these subsidies, as Inglis' plan calls for, might be offset by the comparative advantage clean technologies would enjoy over polluting fossil fuels. It depends on how the carbon price would be calculated. Electricity from renewable sources is cheaper than it has ever been, with wind nearly as cheap as natural gas in some markets.

Despite some high-profile endorsements, no one in Congress has picked up Inglis' bill. Proponents of a tax on carbon emissions saw a window for action after President Barack Obama's second inaugural address, but the White House ruled out that option. Murmurs of a shift on the issue within the Republican party may give his plan some hope, but Inglis' political career is a testament to the partisan nature of the issue.

After a six-year stint in Congress during the 1990s, Inglis went to the private sector before launching a failed bid for Senate. He returned to Congress in 2005 with a focus on energy, seeing economic opportunities for his district, which counts Michelin, Boeing and General Electric among its major employers.

Voters in Inglis' conservative Greenville-Spartanburg area stuck with him through 2006 and even 2008 — South Carolina’s primaries occurred before the financial collapse — but in 2010 he was trounced by Trey Gowdy, who accused him of betraying his conservative roots.

Inglis had broken with conservative orthodoxy in a few instances — he voted for the bailout and against the troop surge in Iraq — but urging action on climate change was “the real heresy,” he said. “I crossed the tribal boundary, and that treachery was unforgivable.”

Tea Party voters tossed him out of office, despite his near-perfect ratings from conservative voting groups like the American Conservative Union, the Christian Coalition of America, and the National Rifle Association.

Inglis contends, however, that tackling climate change is ultimately about preserving opportunities for future generations — a basic conservative tenet.

“Orthodoxies seem like they never change, but they really do,” he says. "They’re fluid.”