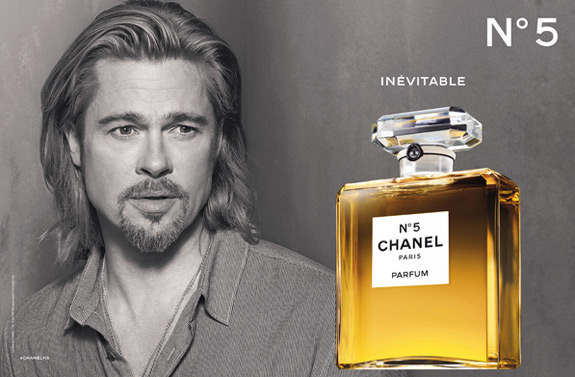 I knew that Brad Pitt had a goofball Chanel commercial going around that everyone was mocking but I wasn’t aware until I saw this ad that apparently the whole campaign is called “Inevitable.”

The title of the campaign is another misstep in Chanel’s marketing. I’m pretty sure the company didn’t set out to create a set of ads that would be made fun of, but there you go. And now there is an added word that further fails to convince us that Brad Pitt is someone from whom we want to buy perfume.

“Inevitable” doesn’t read like two sexy planets drawn together by their gravitational fields. Instead, “inevitable” reads like someone groaning as they see Brad Pitt approaching from across the room at a party. You could replace “Inevitable” with other negative-sounding taglines like “Unavoidable,” “Inescapable” or “Mandatory.” "Uggh, inevitably, it’s Brad Pitt," you might say. "Quick, look away. Did he see us? Crap."

Brad Pitt was once a sex god, but as we all know, he copies the style of the woman he is with. As such, Angelina Jolie used to be known as an predictably unpredictable sexy wild child, until she decided that she didn’t want to be fun anymore. Thus, Brad took on her persona, and now they seem like the world’s most dull yet beautiful couple. (Nothing sounds less convincing than telling CBS This Morning that your partner is “still a bad girl.” Right, OK.)

At said party where Brad Pitt would inevitably corner you, you just know Angelina would take herself very seriously and only want to talk about charity stuff and then Brad would come by and — ugh, inevitably — want to discuss art and furniture design and their children or whatever. (Or, worse, he'd speak to you the way he does in the perfume commercial and you'd have to decide whether he was a) drunk b) having a stroke c) insane or d) just a big creep.) You’d nod and pretend to be interested, and maybe you'd try to change the subject and say “What TV shows are you watching these days?” and then Angelina would butt in and say, “We don’t watch television,” and then you’d smile and finally excuse yourself to get another drink and feel relieved, and then later on you'd ask your friend, "What is up with Brad Pitt?" and your friend would say "Ugh, I know, right?" That's what "Inevitable" conjures up.

Unless, perhaps, Chanel is going for something useful with their new perfume. Get a whiff of the Inevitable and you can make your escape before it’s too late.