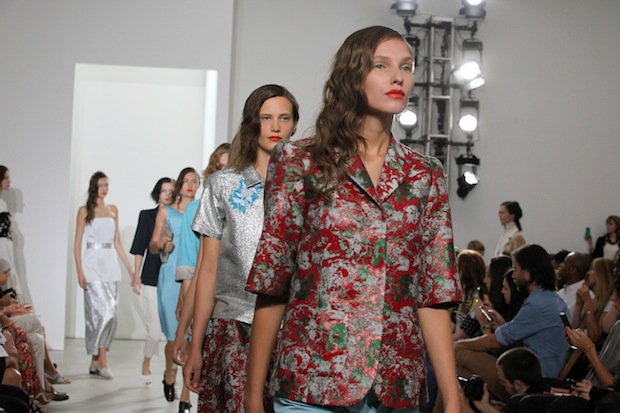 Inherent in the name Fashion Focus: Chicago's Fashion Week is a desire to separate Chicago’s efforts from the more prominent Fashion Weeks across the globe. But is a distinction even necessary?

No one will ever confuse the efforts in Chicago with the Fashion Weeks across the globe. As it stands, Chicago is too broad and sprawling of a city to facilitate that type of community. While there is certainly creativity in abundance, Chicago lacks the infrastructure to facilitate a culture that incites Fashion Week. We do not have a true garment district like New York or multiple fashion-oriented media outlets to support and showcase the designs featured during such weeks.

While there are programs that help designers get their footing (like the upcoming "Industry Day"), in the end, what is needed is not “just” programs, but an actual, sustainable culture and community that exists outside of local governmental intervention and corporate interests. A community can not be facilitated by outsider interests or the government alone, or perhaps even at all. Instead, the individuals must come together and create something that speaks to their needs as creators in a city as uniquely challenging and inspiring as Chicago.

We are not New York or LA or even Miami when it comes to fashion communities and we should not aspire to be so. What Chicago does best is fuel outsiders who ultimately shake up the artistic systems of other cities by creating in a manner that is unique to the environment of this city. Only then will a “Chicago Fashion Week” make sense and tap into the diversity of this city’s creators. Until then, the fashion community will remain displaced.

Chicago is not at a loss for other creative artistic communities. We have thriving music, visual arts, theater, and dance communities. For a community like the visual arts, the galleries and organizations have found a way to thrive outside of the hyper-capitalistic market that makes cities like New York so important to ‘break” and sell in, but so difficult to create in. They have created their own systems, centers, and programs to showcase works and build collectors outside of the standard economic methods and models.

What the fashion community of Chicago can do is create a larger, more visible, more collective system of promotion, organization, and selling that speaks to the realities of a local aesthetic and price point that is more modest. In many ways, they have already done this. One strong example is through local markets such as the revamped and weekly Dose Market that showcases the wares (in a variety of different mediums) of local producers.

Does that mean that Chicago’s efforts are for nothing? There are designers creating and building their businesses in the city. In a city so strongly built on the efforts of the community and the collective, many of Chicago’s greatest designers – both established, like Creatures of the Wind and Hogan McLaughlin, and emerging, like Remi Canarie – feel like efforts of individual creative genius.

Is a “coming together” even necessary? Considering the successes of designers such as Creatures of the Wind (who regularly show at New York Fashion Week) or Hogan McLaughlin (who has designed pieces for heiress Daphne Guinness and Lady Gaga), perhaps Chicago’s unique ability to give a singular artist room to actually create his or her work should be celebrated rather than challenged.

In Chicago, an artist can escape the sort of intense competition, commercialism, and market-driven actions that might stifle creatives in other cities. The individual vision that makes fashion design so endlessly compelling can thrive rather than suffer. Without effort or intervention, the city has created just the right environment to create the collection of fashion designers and creatives it sought to facilitate in the first place.