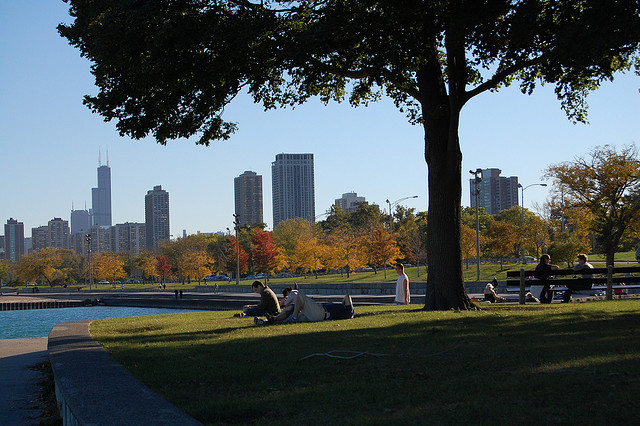 Spring went out with a vengeance this week and who knows how hot summer will be? It's time to take your play-going out-of-doors.

I've always loved the critters of Austin Gardens, at the edge of the Frank Lloyd Wright Historic District in Oak Park; the myriad fire flies, the not-very-shy rabbits and — probably nowadays — crows and geese, too. Oh, and actors. For over 35 years, this pastoral slice at the edge of the city has offered outdoor summer theater among the little park's towering oak trees. This year Oak Park Festival Theatre offers Inherit the Wind through July 24, the popular drama based on the 1925 Scopes "Monkey" Trial over whether or not evolution can be/should be taught in our schools. Hey, some things never change. In the second half of the summer, Oak Park Festival Theatre will present Shakespeare's famous dastard, Richard III (July 19-Aug. 25), who will NOT find the horse he seeks among the Austin Gardens critters (which can include mosquitoes, FYI, so bring some spray).

On nights when the heat is on and you think it might be cooler near the lake, head for Theater on the Lake in the little pavilion at the east end of Fullerton Avenue. Here, for over 60 years, the Chicago Park District has presented a season of summer theater. A different show is offered each week, each one an Off-Loop Theater hit from earlier in the season, presented by its originating theater troupe. This week's show is Or, presented by the Caffeine Theatre (through June 24), and next week's show is Broke-ology, from eta Creative Arts Foundation (June 27-July 1). The eight-week season continues through Aug. 5. Tickets are modestly priced, and the pavilion is rain-proof, although not wind-proof. NOTE: Fullerton Avenue is under construction at Lake Shore Drive, so you might want to allow a little more time than usual.

Of course, if you REALLY want to escape the heat, sometimes the North Woods are the only place to go, especially if you journey to Fish Creek in Door County to catch the justly-celebrated Peninsula Players, the oldest Actors Equity summer stock theater in the nation, now about 77 years old. For some time, it's been run by award-winning Chicago actor Greg Vinkler (famous for his many Shakespearean roles) who always engages some of Chicago's most popular performers for his Up North company. Opening show of the season is Opus, a "dramedy" about the ups, downs and entanglements of a classical string quartet (through June 24), followed by Larry Shue's popular farce, The Nerd (June 27-July 22). The beautiful grounds of Peninsula Players are directly on the shores of Green Bay, parking is free and the theater pavilion is weather-protected.