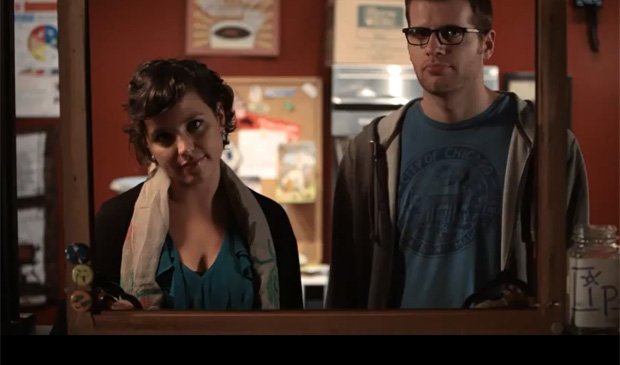 Start the summer with a one-night stand:

When Chicago actors aren’t on stage in scripted work, they’re improvising; and when they’re not on stage improvising, they’re doing it on screen. This feature film from Chicago director Jack C. Newell features Tim Kazurinsky (Second City) and David Pasquesi (The Goodman and elsewhere) in a series of vignettes about an evening in a coffee shop. Pasquesi’s character experiences the close quarters of the title when he finds himself locked in the bathroom with his lover while his wife and her husband wait upstairs. And that’s only one of half-a-dozen plot lines. Don’t blink or you’ll miss something, and don’t skip this one-night showing or you’ll really miss something.  –KK

River North Dance Chicago specializes in jazz-based contemporary dance – in other words, sexy stuff.  This will be their first appearance on the big stage in the big park, though they’ve traveled all over the world to serious acclaim. The evening will also include presenting the “Dream Maker Award” to Mayor Emanuel, but if you’re lucky you’ll be late and miss that part. –KK

Beowulf is an old story that has been newly-told any number of times; a Medieval Anglo-Saxon epic poem about a great Scandinavian hero who defeats monsters. One memorable retelling is West, a play by Brit author Steven Berkoff, which makes it a tale of gang warfare in contemporary London. This version was memorably staged in Chicago 20 years ago by the then-young Lookingglass Theatre Company.

But perhaps no reimagining of Beowulf is more singular than the current one by Arcas Productions and the troupe's founder, artistic director and choreographer, Jeff Lynch (who, like the Lookingglass founders, trained at Northwestern University). Arcas Productions is committed to creating theatre that challenges damaging social pressures related to male body image and sexuality. We're not sure what that means, but Lynch promises a physical-based production which will "blur the line between poetry and movement, dance and combat. The ensemble cast will use a verse translation (from Old English) to compliment continuous movement. Lynch says, “It's like choreographing to live accompaniment."–JA

For some years now, Oracle Productions has been one of the most unique cultural operations in town under the artistic direction of Max Truax, a born story-teller and visualist, who stretches the troupe's tiny storefront into funny-mirror distortions of size, emotion and mood. Add to that Oracle's commitment to "Public Access Theater," which means FREE ALL THE TIME! Truax frequently is drawn to the bizarre, creepy and gruesome, and he seems to be true to his nature with E.T.A. Hoffmann's 1816 psychological horror tale, The Sandman, in Bob Fisher's (of The Mammals) world premiere adaptation. Truax promises cinematic staging to explore themes of sight and seeing, narcissism and voyeurism in Hoffmann’s semi-epistolary narrative about a university student who encounters a man he believes to be an incarnation of the man who murdered his father. Hey, can madness be far behind? –JA