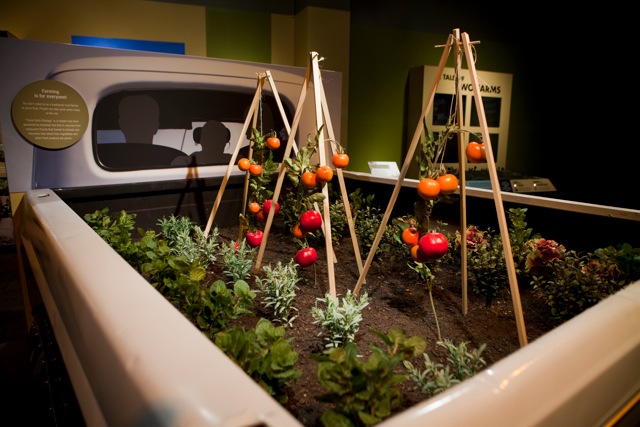 The first thing you see upon entering the Peggy Notebaert Nature Museum’s new exhibit on food is a 19th century hand plow, its modesty a bit disarming as the climax of a walk-up whose walls are splashed with projections of grain nodding majestically in the wind. But that simple tool, which seems downright primitive in a time of genetically modified organisms and concentrated animal feedlots, was revolutionary.

Steve Sullivan, the Nature Museum’s senior curator of urban ecology, said the diverse suite of native species that scientists now see as a hallmark of ecological resilience looked more like a mess to the area’s white settlers.

“Illinois was bulletproof,” he said. “It was an intact ecosystem.” Settlers didn’t know how rich the soil was, in other words, because they couldn’t access it. Once John Deere helped them turn the soil, they changed the landscape rapidly. Less than one one-hundredth of one percent of Illinois’ prairie remains today.

But the bucolic family farm phase that most people picture when they think of homesteaders on the prairie didn’t last long, said exhibit curator Alvaro Ramos. For industrial capitalists, efficiency is the mother of invention — concentrated, mechanized farms quickly took root.

“Now we’ve got a lot of food,” he said, “but how good is it?” Ramos said the point of the exhibit is not to sow nostalgia, but to push visitors to reexamine their own relationship with food — and by extension the Earth — that sustains them. 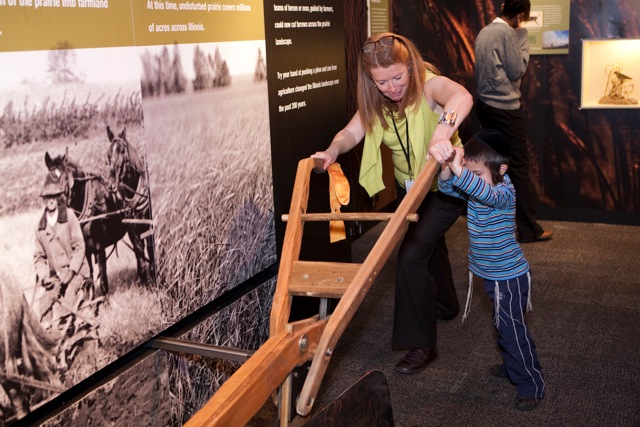 Placed throughout the exhibit are “human stories” placards holding up local examples of agricultural stewardship from past and present: The Murphy Family maintains a community garden at 65th and Woodlawn in Chicago; the Fresh Moves truck nourishes food deserts with local produce; the Chiappetti family lost their savings during the Great Depression, received farmland as repayment from their belly-up bank, and turned a subsistence enterprise in lamb-raising into an inter-generational industry.

“We want to empower people,” Sullivan said. “By using your neighbor’s example, you can see how you can have an impact.”

(Sullivan’s impact on the exhibit goes beyond his intellectual input. The taxidermy chicken and rabbit on display? “Leftovers from my dinner,” he said.)

Buying local produce isn’t going to resurrect the vast swaths of prairie that once blanketed the Midwest — the deep-reaching root systems of its native grasses holding fast to black soil, nourishing bison and prairie chickens —but that’s not the point. Ramos, the exhibit’s curator, said Food is not a history exhibit. All he wants is for visitors to leave knowing that every time they lift a fork or shop for groceries, they’re stepping into nature.

“Food: The Nature of Eating” is open March 23 through Sept. 8 at the Peggy Notebaert Nature Museum.