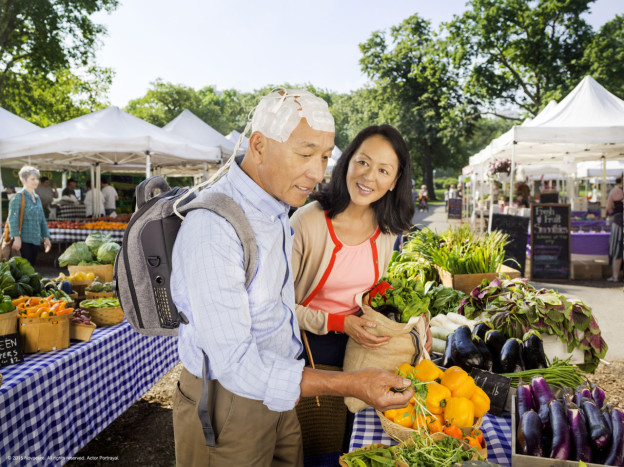 For the first time in more than a decade, there’s a new treatment for patients diagnosed with one of the most common and deadly forms of brain cancer, known as glioblastoma or GBM. More than 12,000 Americans are diagnosed annually and until now, the median life expectancy after diagnosis was about 15 months.

Unlike traditional treatments, which include chemotherapy and radiation, this new treatment is non-invasive, doesn’t involve drugs and has few side effects. In fact, it looks a lot like an old-fashioned bathing cap hooked up to a backpack.

The treatment, called Optune and developed by the oncology company Novocure, delivers electricity directly to the areas of the brain affected by GBM tumors, and has shown promise both in extending life and shrinking tumors.

Optune performed so well during testing that clinical trials were halted to speed its delivery to the market. The treatment is not being touted as a cure, but as a new tool in extending life and slowing the spread of the disease. William Doyle, Novocure’s executive chairman, discusses the treatment with Here & Now's Jeremy Hobson.

How does it work?

“We all know we have essentially three weapons against cancer today – surgery, radiation, drug therapy. Optune is a completely different fourth weapon, and it uses physical properties of electric fields specifically within cells. That’s our name, Optune, because we have to tune these fields in order to get them into the cells we’re interested in. Once we get the electrical fields into the cells, we can interfere with the proteins required for cell division, and instead of one cell becoming two and two becoming four, when we interfere with the machinery of cell division, one cell becomes zero, and that’s how we fight cancer with Optune.”

Is it meant to be used with other methods of treatment?

“That’s one of the great things about Optune, because of course with the other three modalities, we hope for the increase in survival, but we have to worry about toxicity. With Optune, there’s no systemic toxicity so we can add it, in particular, to drug therapies. We don’t see any increase in the toxicity, and we see in many cases what’s called synergy or a multiplication effect in terms of the efficacy.”

What can it do to extend life?

Clinical trials were cut short to bring this to market. How much does it cost?

“There has not been an advance in glioblastoma in over a decade. This is an incredibly difficult cancer. It’s a fact that oncology therapies are expensive – that’s a great concern to patients. We’ve in fact created a group within Novocare that works directly with patients and their insurance companies, we have extremely large patient assistance programs, so we work to make sure that every patient that’s eligible for Optune receives it, regardless of income. The list price for Optune is $21,000 per month, including all the equipment and nurse support. So again, oncology therapies are expensive.”

In the future are you hoping to use this treatment for other kinds of tumors?

“The mechanism interfering with proteins of mitosis is universal to all cells, so once we tune our fields so that they enter the cell of interest, we can kill it. The limitation is back to the bandages. We need to be able to surround the region of the body with our transducer rays, so that means our targets are the deadly tumors of the brain, chest and abdomen. We have clinical trial programs in pancreatic cancer, ovarian cancer, non-small cell lung cancer, mesothelioma… so we have a full range of targets for this therapy.”

How close are we to a cure?

“Cure is a very difficult word to use, and what we’re focused on is extending long-term survival. I will say the numbers we talked about earlier were medians. What that means is some patients do worse, other patients do much better. Another fact of the Optune therapy is that when it’s on, it’s killing cancer cells; when it’s not on, it’s not killing cancer cells. So patients on Optune do much better when they use it at least 18 hours per day, and we have seen patients with extended long-term survival. So I don’t know when we will have a cure but I think using Optune in combination with other therapies offers hope that didn’t exist previously.”