This story is part of 16 Shots, a podcast about the fatal police shooting of Laquan McDonald, the trial of Officer Jason Van Dyke, and the troubled relationship between African-Americans and the Chicago Police Department. Check back later to hear the latest episode. To hear all the episodes, subscribe on Pocket CastsApple Podcasts, or wherever you get your podcasts.

A white Chicago police officer was found guilty Friday of second-degree murder in the fatal shooting of black teenager Laquan McDonald that was captured on a shocking dashcam video.

It took the jury of eight women and four men about eight hours to find Chicago Police Officer Jason Van Dyke guilty in the racially-charged case.

It's the first time in decades that a Chicago police officer has been convicted of murder for an on-duty death. Jurors also found Van Dyke guilty of 16 counts of aggravated battery with a firearm. He was acquitted on one count of official misconduct.

It’s unclear how much time Van Dyke will serve in prison. The judge in the case will sentence Van Dyke at a later date.

Van Dyke, dressed in a dark suit and gray tie, was expressionless as the verdict was read shortly before 2 p.m. He was denied bail and taken into custody after the hearing.

Van Dyke’s lawyer, Dan Herbert, expressed relief that his client was not found guilty on first-degree murder, which carries a sentence of 20 years to life imprisonment.

“We’re extremely pleased that Jason Van Dyke and his family, they have their life back,” Herbert told reporters after the hearing. “They were looking at very dire circumstances.”

Herbert said he told Van Dyke, “You just went into a heavyweight boxing match against Mike Tyson with your hands tied behind your back, and you're still standing.”

Kevin Graham, president of the Chicago Fraternal Order of Police, blamed politicians for using the case to “really kick around the Chicago Police Department, which is unfortunate.”

Special prosecutor Joseph McMahon said the verdict “holds Jason Van Dyke accountable for his actions,” but that it “does not bring back Laquan McDonald.”

“Laquan McDonald was not a throwaway young man,” McMahon said. “He had his challenges as many people do, and he should have been arrested that night. But that’s where this story should have ended.”

The Rev. Marvin Hunter, the great-uncle of McDonald, called the jury’s verdict “a victory for America.”

“People all over America and all over the world have been waiting to see what was going to happen,” Hunter said. “And so this is a victory for everyone.”

Activist William Calloway praised the jury’s decision, saying it sent a message about controversial police killings around the country in recent years.

“The buck stops here in Chicago,” he said. “We hope this gives some inspiration and encouragement, not only to the city of Chicago, but all cities across America … Excessive force and unlawful and unjustified and unreasonable use of force by police officers will not be tolerated.”

Jurors who spoke to reporters after the verdict said they were not swayed by Van Dyke’s testimony when defense lawyers took the risky step of calling him to the witness stand. The jurors, who did not give their names, said they thought Van Dyke looked “rehearsed.”

“We just didn’t buy it,” one juror said of the suspended officer’s testimony. Another said of his testimony: “He messed up.”

During the trial, the jury was repeatedly shown the dashcam video of Van Dyke killing McDonald in a hail of 16 shots on Oct. 20, 2014. Several jurors said Van Dyke was a veteran police officer who should have taken time to evaluate the scene when he arrived before shooting McDonald.

The jury appeared to consist of seven whites, three Hispanics, one African-American and one Asian-American.

Earlier Friday, Chicago braced for the highly-anticipated verdict in a case that has roiled the city for years. Chicago police were put on 12-hour shifts and many were moved to staging areas to prepare for possible violence that might follow the trial outcome. Some downtown businesses allowed workers to go home early, and Chicago Public Schools canceled some after-school events.

Around 12:30 p.m., the court announced that the jury that had begun deliberations Thursday afternoon had reached a verdict, and that it would be read around 1:45 p.m.

A group of mostly young black men and some women gathered outside the courthouse, huddled around one cell phone, listening to a live stream of the verdict being read inside.

People in the crowd screamed with joy, jumping up and down, shouting “Yes!” and “Justice for Laquan!”

Outside City Hall, about 100 activists cheered loudly when they learned the verdict and later peacefully marched down Michigan Avenue chanting “guilty.”

Yet some Chicagoans reacted to the verdict with cautious optimism.

The death of McDonald, 17, went largely unnoticed until a judge ordered in November 2015 that city officials release the police dashcam video of the shooting. The video appeared to show McDonald, who was carrying a knife with a three-inch blade, walking away from Van Dyke as the officer opened fire.

The fallout lasted years: The city’s top cop was fired, the local state’s attorney was voted out and the U.S. Justice Department found that Chicago police officers were poorly trained. Then, days before the start of the trial, Mayor Rahm Emanuel abruptly announced he would not seek a third term — but he didn’t mention Van Dyke or McDonald as a reason for his decision.

After nearly three years of pre-trial hearings, lawyers spent less than three weeks presenting their cases to the jury. 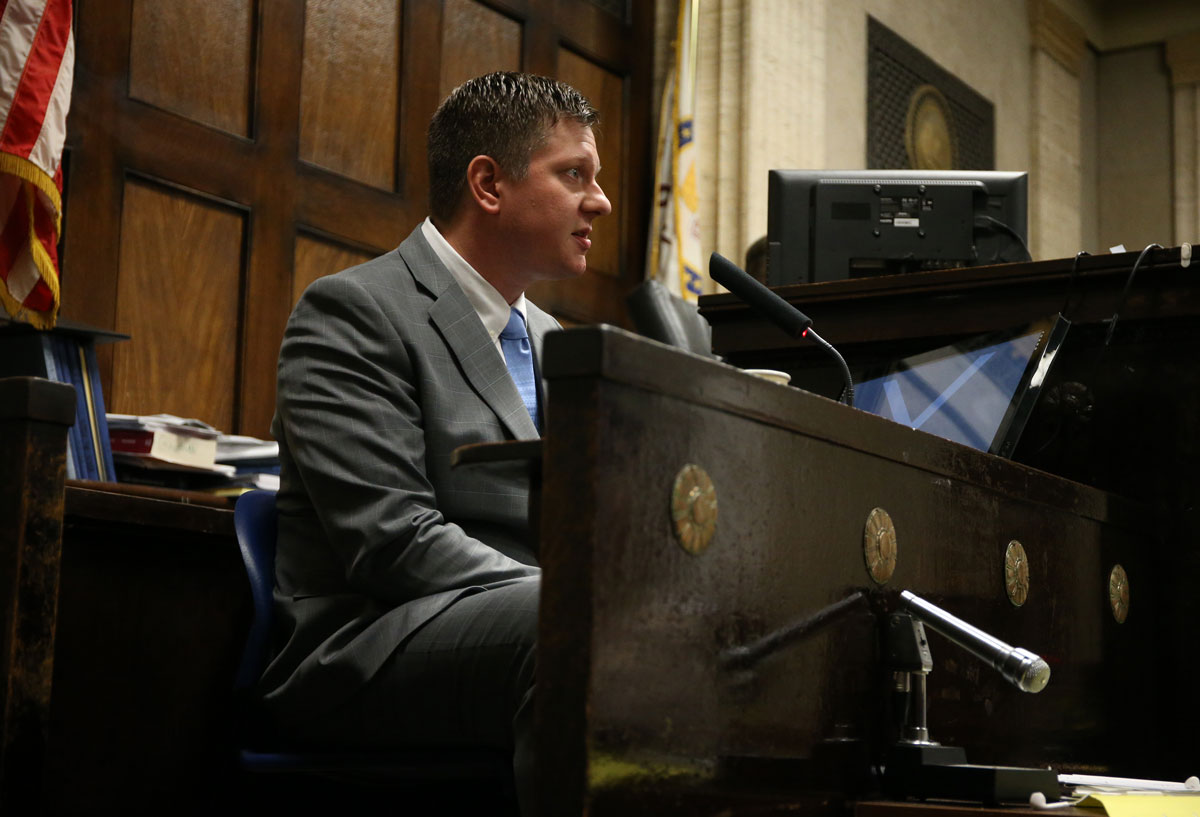 This week, Van Dyke took the stand and insisted that the infamous dashcam video didn’t show the shooting from his perspective. According to Van Dyke, McDonald was walking toward him with a knife and the shooting was self-defense.
Van Dyke’s lawyer, Daniel Herbert, attacked “overzealous prosecutors” for the “unprecedented” charges. He described McDonald as an out-of-control teen with a history of violent outbursts and compared him to a character in a monster movie.

“When a monster turns and looks at the victim, that's when the music starts to play,” Herbert said during his closing arguments.

But prosecutors argued that not a single shot was necessary. They showed the jury the dashcam video dozens of times and repeatedly noted that no other officer at the scene felt threatened enough to open fire on McDonald.

Dr. Ponni Arunkumar, the chief medical examiner in Cook County, testified that McDonald was alive for each shot. She also noted that the teen had traces of the illegal drug PCP in his system at the time of death.

Officer Joseph McElligott, one of the first cops to encounter McDonald that night, said on the witness stand that he didn’t shoot because the teen wasn’t a deadly threat and an officer with a Taser was on the way. And Officer Dora Fontaine, who arrived around the time Van Dyke opened fire, testified that McDonald never moved aggressively toward officers.

However, former Officer Joseph Walsh told the jury that McDonald “swung” a knife moments before the shooting. Walsh — who was Van Dyke’s partner the night of the shooting — faces conspiracy charges for allegedly exaggerating the threat McDonald posed to Van Dyke. He maintained that the dashcam video isn’t a fair depiction of what Van Dyke saw because it was recorded from behind McDonald.

But Urey Patrick, a former FBI agent, testified that the “risk posed by Mr. McDonald did not rise to the necessity of using deadly force to stop it.” Patrick concluded that McDonald was not a threat because the dashcam video showed him moving away from Van Dyke.

Van Dyke’s lawyers essentially put McDonald on trial by calling numerous witnesses to testify about the teen’s history of violent outbursts, erratic behavior and drug use. But their biggest witness was Van Dyke himself.

The suspended officer spent more than an hour on the stand answering questions during his teary — and sometimes defensive — testimony. Van Dyke, 40, detailed how he heard a call over the police radio for help arresting a suspected radio thief who had “popped” the tire of a police SUV. He testified that he thought officers were under attack and he shot McDonald after the teen came toward him with a knife.

“His back never once turned towards me,” Van Dyke said. “He could have made a decision to turn and walk in the other direction; he could have dropped the knife and ended it right there.”

Van Dyke’s lawyers also called current and former Cook County Juvenile Detention Center employees who testified how McDonald got into fights, needed to be restrained, and admitted to taking PCP. Prosecutors had unsuccessfully argued that McDonald’s past was irrelevant because Van Dyke had never met the teen.

Numerous defense witnesses also testified in an effort to discredit the autopsy and the dashcam video. Forensic pathologist Dr. Shaku Teas said a single shot to the chest “caused [McDonald] to die rapidly.” The other 15 shots, she said, would have caused injury but were “totally immaterial” to the death. Jurors were also shown an animated video of the shooting meant to give Van Dyke’s hypothetical perspective.

Chicago Police Supt. Eddie Johnson said the department is prepared for protests in the days after the verdict.

But Johnson said he does not expect violence to erupt because police “have done a lot of community outreach.” Sources said officers will work longer shifts, and Johnson has said days off will be cancelled if protesters become “aggressive.”

While the Van Dyke case has come to a close, three others still face charges of conspiring to cover up for Van Dyke. The trial of former detective David March, former officer Joseph Walsh and officer Thomas Gaffney is scheduled to start Nov. 26. March was CPD’s lead investigator, Walsh was Van Dyke’s partner the night of the shooting and Gaffney was one of eight other officers on the scene during the shooting.