A charter school on Chicago’s South Side buzzed Tuesday evening with a celebration to wrap up the final day of Kwanzaa.

In Kwame Nkrumah Academy’s auditorium, people joined a dance teacher onstage to learn and perform West African dance moves as onlookers watched and cheered. In a classroom, kids perched in front of easels and used their paint brushes to fill outlines of Africa with the Pan-African flag. And in the cafeteria, food vendors lined up along walls selling meals, including vegan options, to feed hungry crowds. 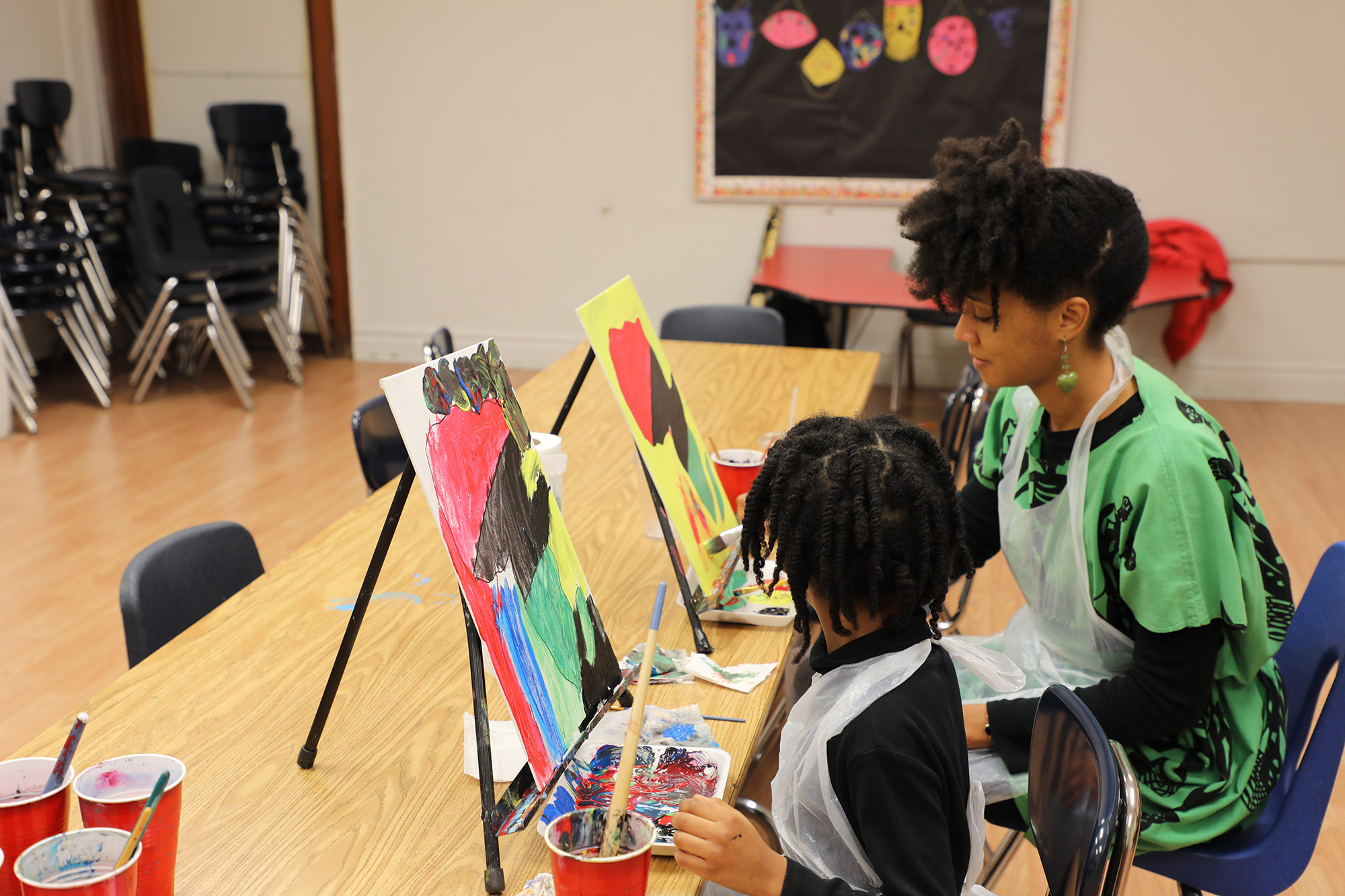 Themed “Black, Beautiful, and Together,” the event, called Super Karamu, was part of a five-year-old initiative to infuse new life into Kwanzaa.

A collective of Chicago friends called SuperGroup is behind a series of events held each year during the holiday that have a modern take on the 50-plus year tradition, which they’ve named Super Kwanzaa. Its members are mostly artists — singers, dancers, designers, photographers — and their vibrant events are often musical, filled with performances, and display visual art. 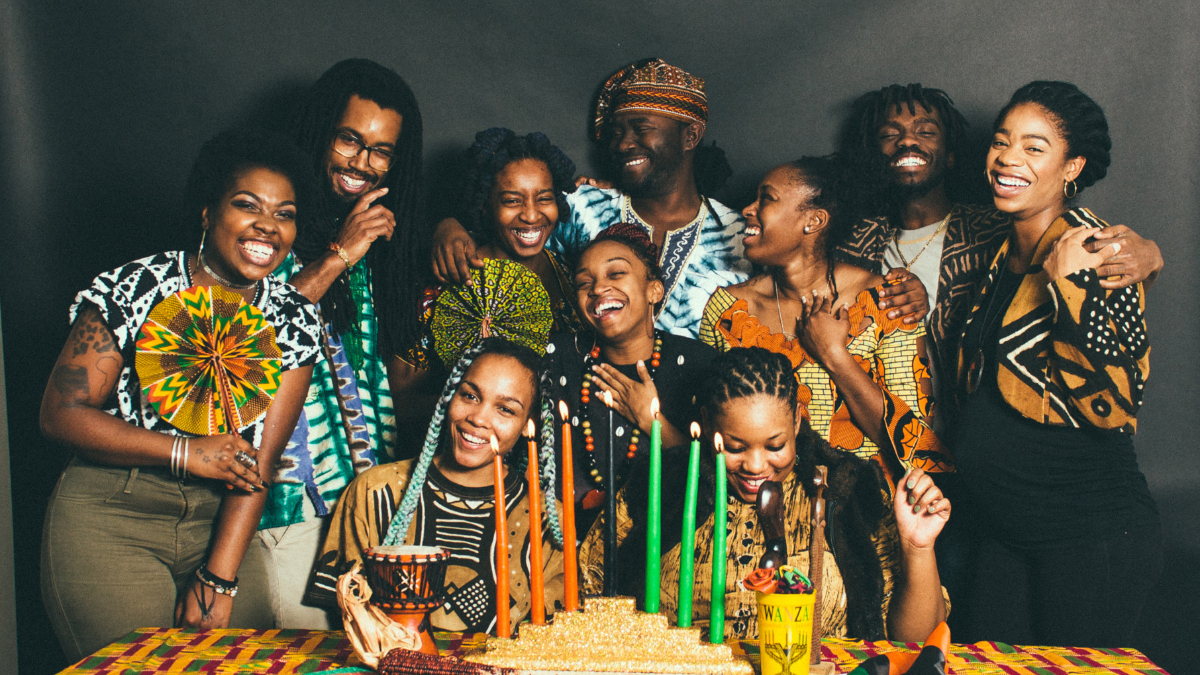 Kwanzaa was started in 1966 to connect African-Americans with their ancestral roots and is held annually from Dec. 26 to Jan. 1. But as the generation that first celebrated it ages, some note the holiday hasn’t had the same significance for those who are younger.

SuperGroup members, who grew up celebrating Kwanzaa, wanted to change that, said 30-year-old Imani Amos. She said members noticed some people their age felt disconnected to the holiday and that “the baton was not getting passed” to the next generation of leaders so they could explore new ways to celebrate.

“We kind of sat down and thought how could we fill that void, what are the conversations that we needed to have in order to create a resurgence of Kwanzaa and give it a little bit more life,” Amos said. 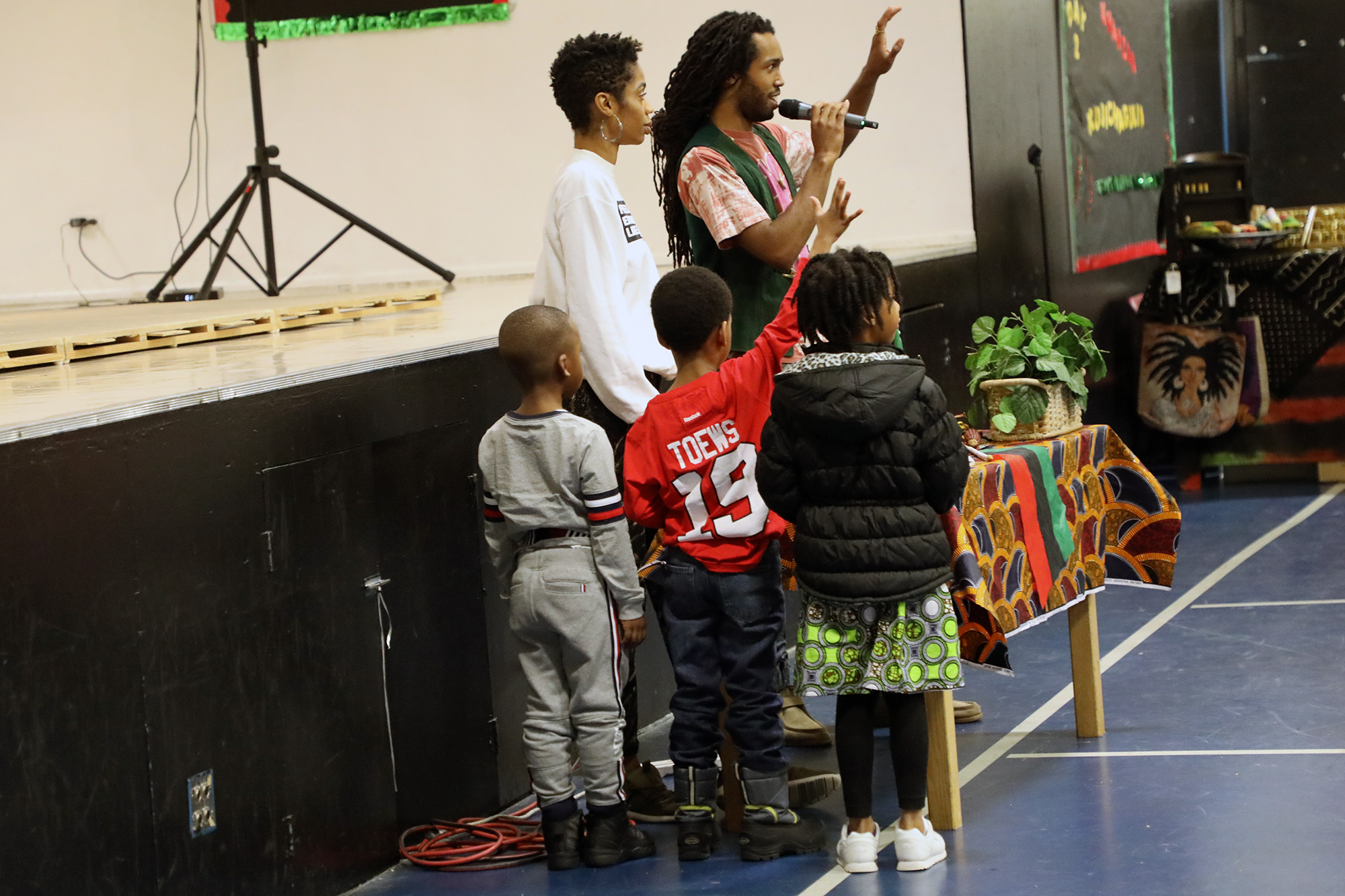 What came from that discussion was SuperGroup’s own series of events during Kwanzaa. The goal is to make the events feel fresh, accessible, and inviting.

“Kwanzaa, honestly, has been stuck in the ‘90s for so long,” Amos said. “And we were trying to make it something that is not stuck, something that .. is current and modern, and is creative and ever-evolving.” 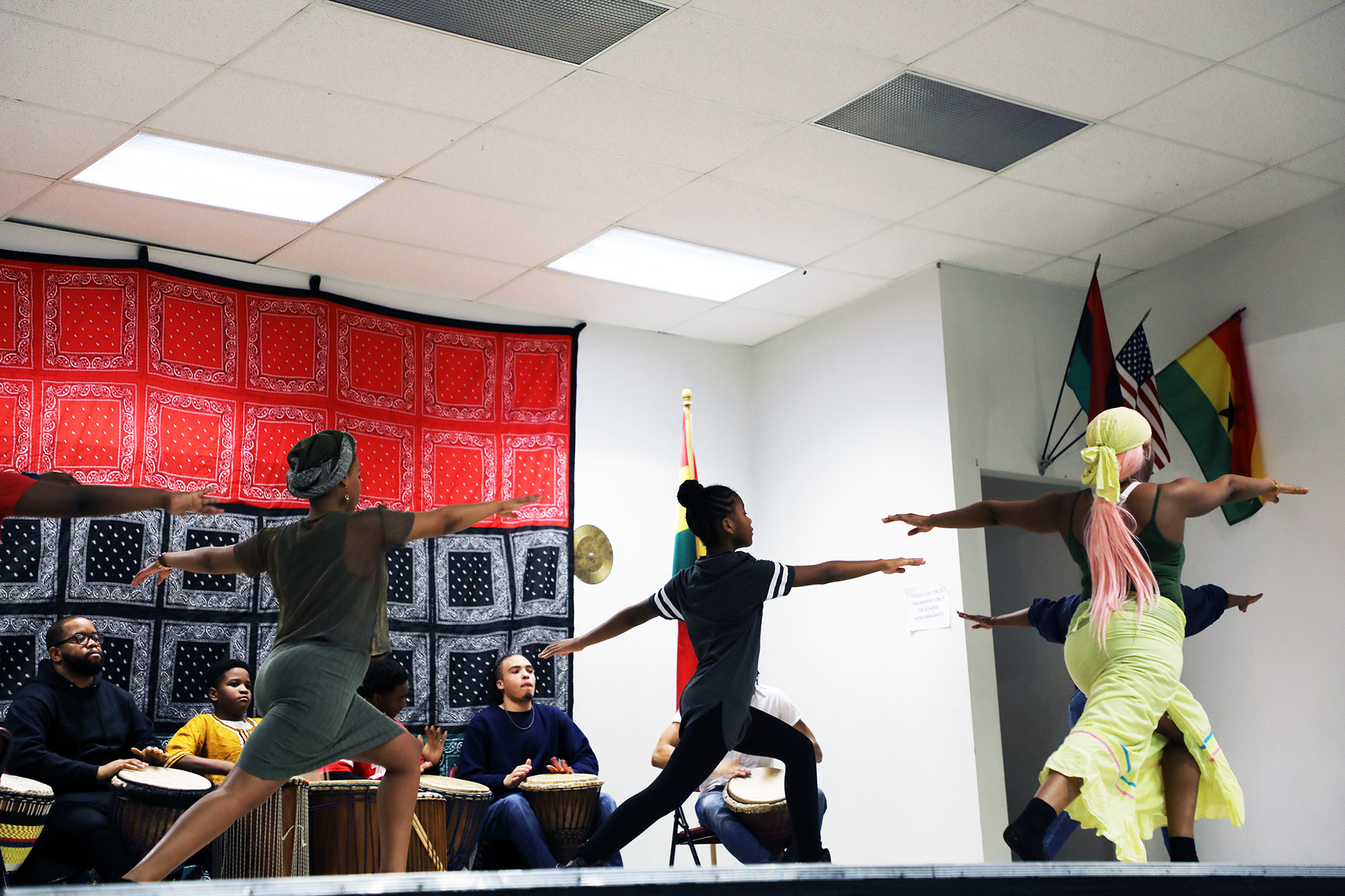 In the past, events have ranged from paint classes for kids, photography exhibits, and even a flash mob. That spirit of creativity continued this year.

On the first day of Kwanzaa, which is umoja or unity in Swahili, the group hosted its annual open mic. On the second day, kujichagulia or self-determination, there was a dance class featuring Chicago footwork, West African dance, zumba, and afrofusion. And on the fourth day, ujamaa or cooperative economics, there was a panel discussion on a book and project called How to Be a Cool Black Guy by SuperGroup member Jihad Kheperu. 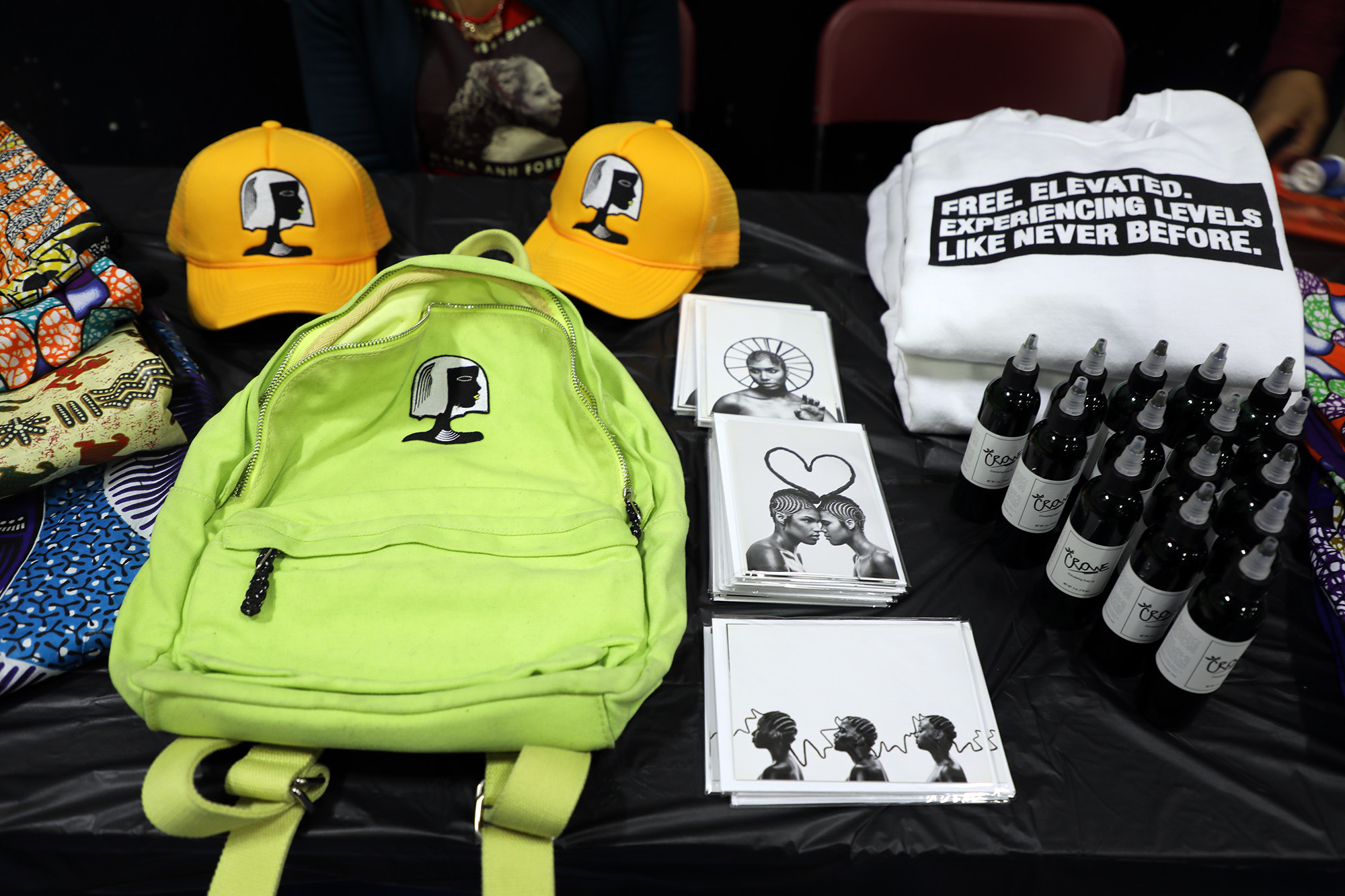 With its dance class, performances, and ceremonies, Tuesday’s Super Kamaru event was a combination of events: equal parts activity and education.

That educational aspect was important to Samu Tepra, who has been observing Kwanzaa for about 30 years and brought his daughter to the event. He said it’s necessary to teach the principles of Kwanzaa and to “pass on knowledge, information, and wisdom in a deliberate fashion to the younger generation.” Kwanzaa events like these are “a gathering point” for that teaching, he said.

It was the environment that attracted siblings Kenrick Osinaike, 26, and Cynedra Osinaike, 23, who were at the Super Kamaru event as vendors with their company, Dr. Herbal’s Organic & Vegan Hair Care. They said their parents first introduced them to Kwanzaa and were drawn to the event because it is also a form of care.

“We’re into healing from the inside out or outside in,” Cynedra Osinaike said. 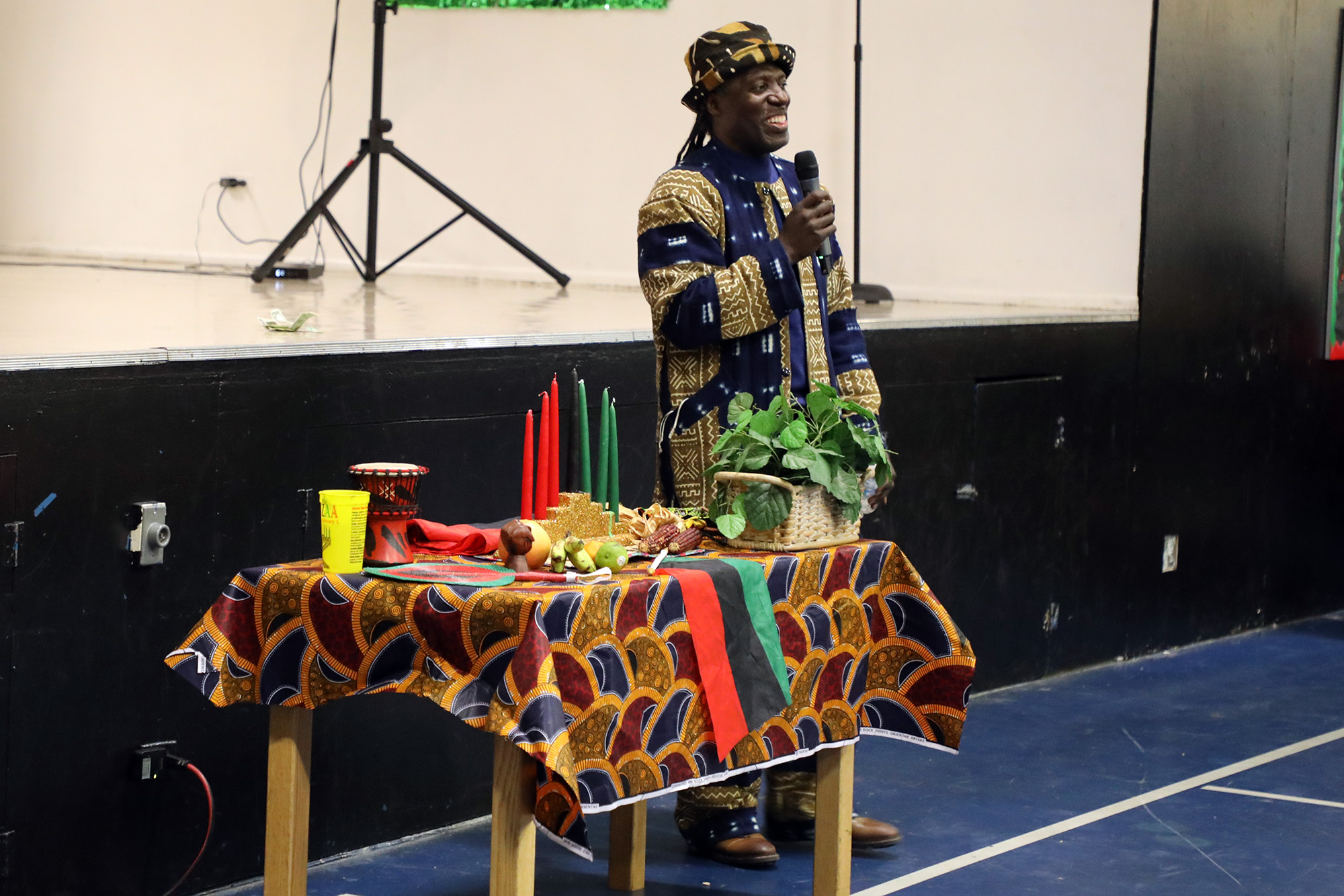 “We definitely want to make people know that it's like … the best thing ever,” Amos said. “This is like a self-help book in real life.”