A Chicago company claims to have a unique answer to the city’s affordable housing shortage: modular homes.

In a giant warehouse on the Southwest Side, the construction company Skender will begin producing Chicago three-flats on an assembly line as if they were cars, starting Tuesday.

And a major Chicago developer is buying into the idea.

Sterling Bay, developer of the Lincoln Yards megaproject, says it’s planning to buy 100 vacant lots on the South and West sides to plant modular housing there.

To kick things off, Sterling Bay is purchasing the first 10 three-flats to roll off Skender’s production line. They hope to have the first families living in them by late August.

Sterling Bay is required to build hundreds of units of affordable housing as part of its lucrative deal with the city to develop high-end housing in Lincoln Yards. The firm says some of the new modular homes could help fulfill that quota.

Like similar companies in Brooklyn and San Francisco, Skender believes it can build homes faster and cheaper in its factory than is possible through traditional construction methods. And it believes the manufacturing environment will allow them to build longer-lasting, more energy-efficient homes.

“We’re completely changing the paradigm here for the construction process, which will drive the price of the home down,” said Stacy Scopano, Skender’s chief technology officer. 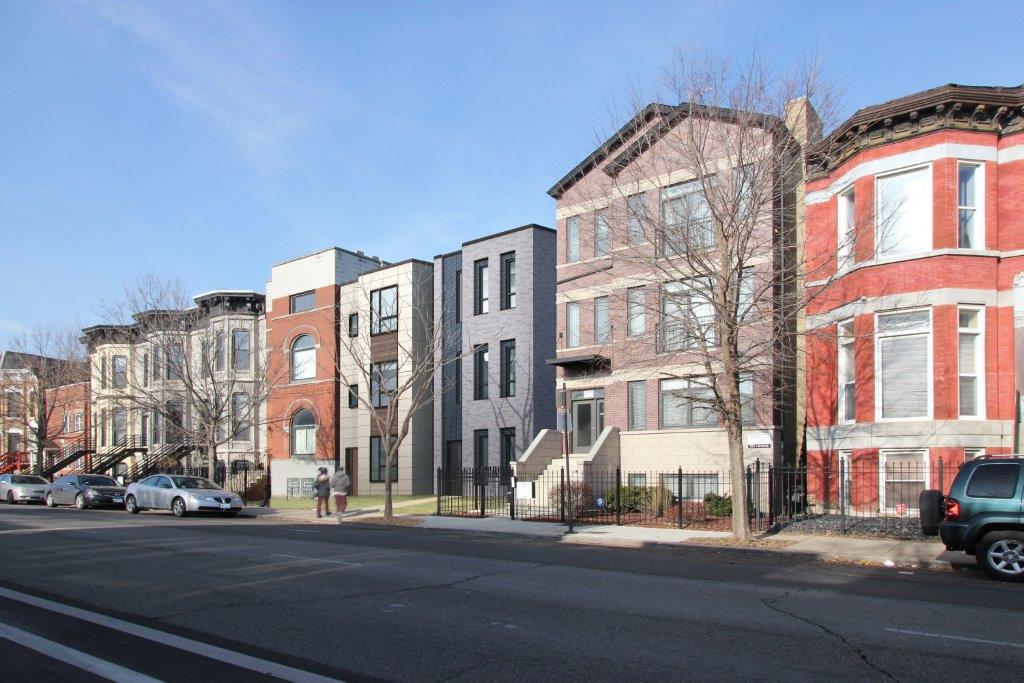 Production time for a fully constructed “module" — think of them as rooms or partial apartments, complete with windows, flooring and painted walls — is just six days. Twelve modules make up a three-flat. Once they're finished, they get shrink-wrapped, put on a truck and driven to vacant lots where they will be stacked into three flats.

The modular concept is a hot idea in U.S. cities with a shortage of affordable housing. In New York City, Mayor Bill de Blasio wrote modular homes into the city’s 2017 housing plan. Last year, San Francisco Mayor London Breed announced plans to put $100 million in city dollars toward a factory that could churn out hundreds of affordable modular units.

“The cost of building and constructing affordable housing has long been a source of angst in the development community and for the city,” said Marisa Novara, Chicago’s newly named housing commissioner.

It might seem counterintuitive, but affordable housing can be incredibly expensive to build — as much as $375,000 per unit in Chicago, say nonprofit developers. That’s due to stringent requirements around materials and wages paid to workers. And it’s why public subsidies are necessary to build affordable units.

“We need to be creative and try new ideas,” Novara said. “[Mayor Lori Lightfoot] talked about things like shipping containers and tiny homes. And I think [modular homes] fits right in line with some of those ideas.”

Scopano says it’s past time for homes to be thought of as products — and for them to be manufactured like anything else.

“Carpenters are walking around a project site — tape measures and plumb bobs. [Those are] literally Stone Age work methods,” said Scopano. He says being able to mass produce homes in a high-precision manufacturing setting is what will eventually push down prices and increase quality. 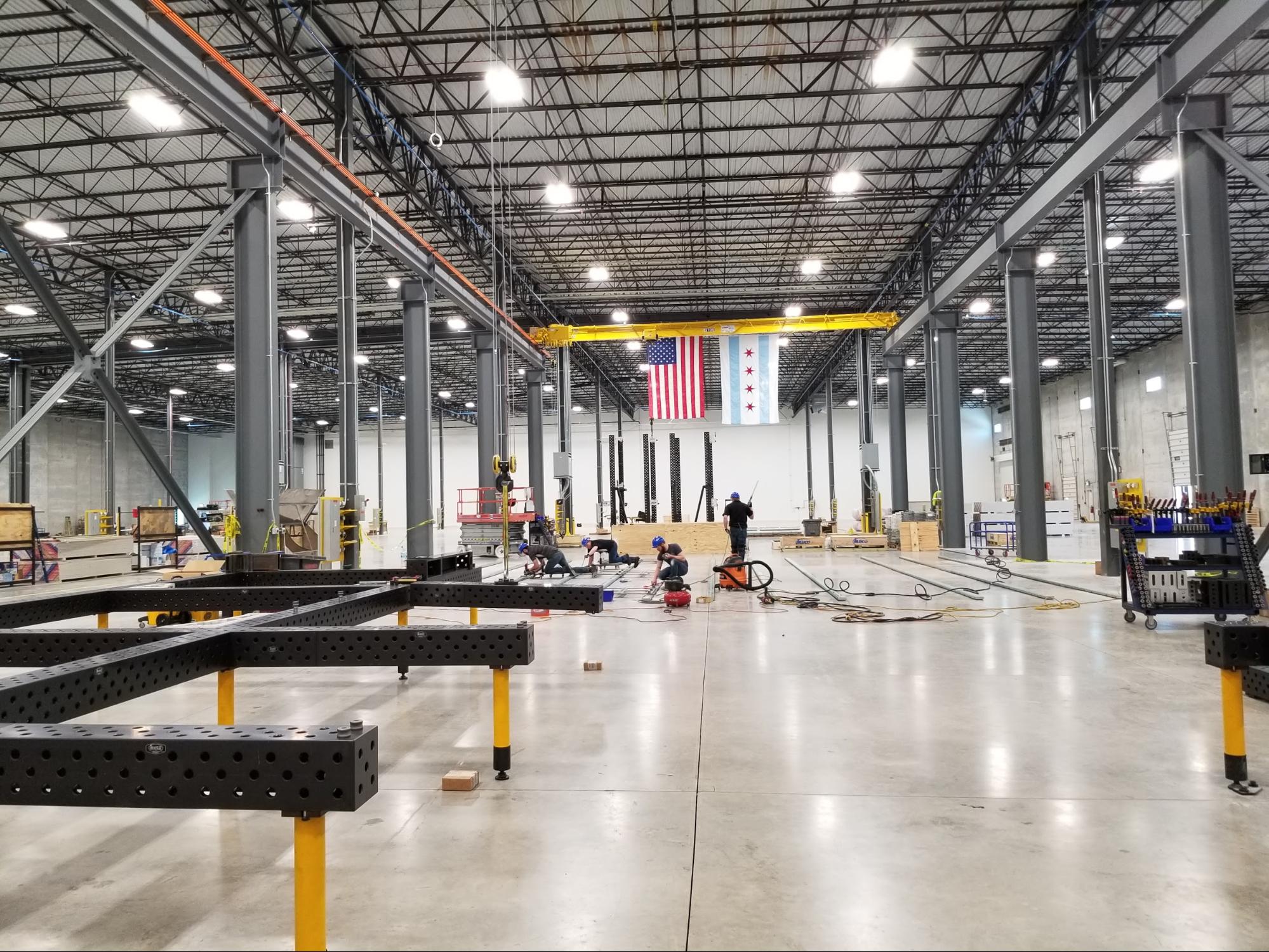 On the Skender assembly line, lasers guide the work. Welding tables where ceiling and floors will be built are leveled to one-ten-thousandth of an inch. The all-steel studs are manufactured to size and they snap into place before being welded together.

In the early stages of production, the “modules” look like skeletal, cube-shaped rooms. Everything is added on the assembly line, from electrical conduit and HVAC systems to insulation, drywall, paint and light fixtures.

“By the time they get to the end of this line, they’re fully finished,” said Tim Swanson, Skender’s design chief. “If this were a hotel room, the bed’s sitting there and the TV’s on the wall.” 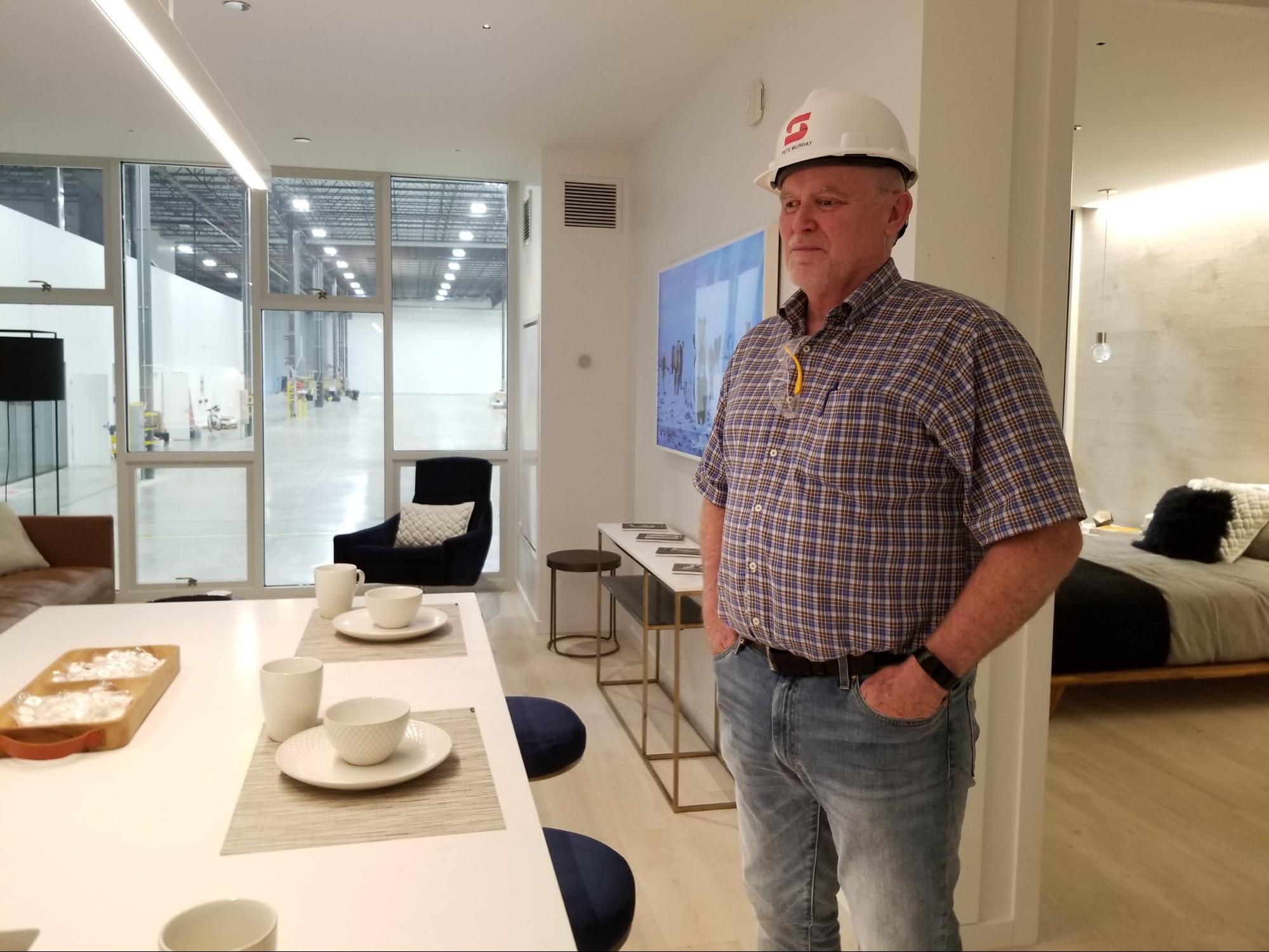 A one-bedroom prototype built last October sits in a corner of the Little Village facility. Window blinds go up automatically as the apartment door opens (not an option on the affordable unit, Skender clarifies). Inside, the sleek apartment looks like an Ikea showroom. There are quartz countertops and backsplashes (affordable units get tile). Molding and floor boards cover the seam where two modules came together to form the apartment.

Swanson sees the modular, affordable three-flat as the modern iteration of the Chicago bungalow.

“The city [was] built on bungalows and two-flats because these were housing typologies that were standardized in design, that were approved by the city, that could just be deployed. So we [could] take entire neighborhoods, provide housing for them. It’s not that dissimilar from what we’re doing today.”

Swanson says 85% of every home is standardized — allowing for economies of scale and improvements in design and manufacturing. The customizable aspects — size and layout and finishes — make each unit feel unique.

Swanson says Skender is on a mission to “take away the stigma of what modular and manufacturing actually means. In Japan, it’s high-quality housing. It’s assumed to be better if it’s built in a factory.”

But the promise that modular homes will lead to a boom in affordable housing is still largely aspirational.

The production and assembly cost of the Skender three-flat is $1 million — or about $335,000 per unit — and that doesn’t include the land. The company says this process is bound to get cheaper as production ramps up and improves, but the current cost is not considered affordable by government standards.

“I don’t think that there is any silver bullet, and that includes the production of modular housing,” said Joy Aruguete, CEO of the Bickerdike Redevelopment Corporation, which has been building affordable housing in the city for 50 years.

Sterling Bay’s first order of modular three-flats will be shipped to vacant lots in his ward.

“We have hundreds of these lots in this neighborhood,” Burnett said earlier this week during a tour. “Right now, [Sterling Bay] is looking at some private lots ... over here in the community, just to prime the pump and show the community what they can do.”

City-subsidized developments are the only type of construction in this part of Chicago, says Burnett. “The only thing we can get built in these communities is with public money,” he said, because market-rate housing costs more to build than it would sell for here.

Affordable housing requirements are built into Chicago law, but only a fraction of required units are actually built. That’s because when they’re given the option, developers overwhelmingly choose to forgo the city’s quotas by paying a fee instead.

In exchange for accommodations and city subsidies as part of the Lincoln Yards deal, Sterling Bay is required to build and pay fees for hundreds of units of affordable housing. Some of the modular homes in Burnett’s ward could count toward that obligation

“When you start seeing a whole bunch of buildings going up, then folks start fixing up their properties, then businesses will move in, schools will get filled up,” said Burnett, who dreams of restoring the West Side to the sort of middle-income community that existed here before factories and jobs left.

Correction: This story was corrected to indicate that production time for a single module is six days. Skender uses 12 modules in a three-flat.

Editor’s note: The Skender company is the general contractor for a current renovation project at Chicago Public Media offices at Navy Pier.