People who work in federal buildings in downtown Chicago had to fight slow, slushy, and even dangerous commutes to work on Monday. But still, many were glad to do it. It was the first day back on the job after the longest government shutdown kept thousands away from work for more than one month.

“I feel good,” said Irene Kazazakis, an architect for the General Services Administration, who works in the John C. Kluczynski Federal Building. “Going into the office today, I was just thinking, OK, who do I need to meet with? What do we need to do? Where did we leave off? What do we need to do next?”

Kazazakis said that because her agency had some holdover funding, she was only furloughed for the last three weeks, which meant she missed one paycheck. Most other federal workers affected by the furlough missed two paychecks. Still, Kazazakis has not been paid in more than one month. She said that while she’s glad to return to the job she loves, she does not feel reassured about the future. On Friday, President Donald Trump signed a resolution to reopen the government for three weeks, leaving open the question of whether another shutdown may be looming in February.

“(That) is a little unnerving,” said Kazazakis. “But I’m hopeful that Congress and our president will come to a resolution before then so that there is not another shutdown.” 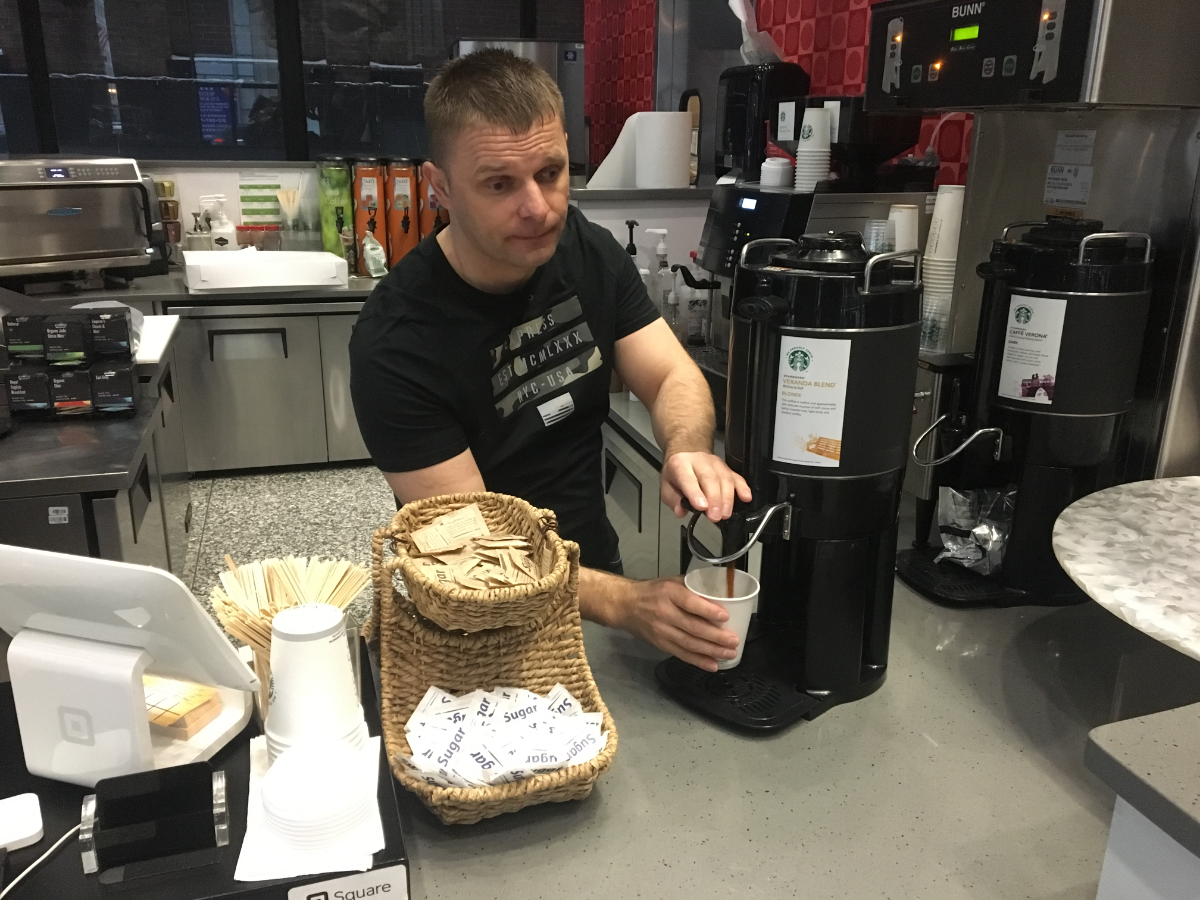 At the Ralph H. Metcalfe Federal Building across the street, Janusz Leja said he isn’t sure when he can reopen the Kava Cafe, a breakfast and lunch station that he has run in the building’s lobby since 2014. News that the shutdown had ended came too late in the day on Friday for Leja to arrange for supplies such as milk to be delivered by Monday morning.

Still, Leja was behind the counter on Monday morning, offering free coffee to welcome employees back. He’s come to know several federal workers over the years. Leja said it was good to finally catch up with some he’s not seen for weeks during the shutdown.

“It’s been tough for them,” said Leja. “They were really glad to just come back, to be back at work, and they really value what they do over here”

Leja said the shutdown has been difficult for him, as well. He said he had to close the cafe for nearly all of it, because business was too slow to cover labor costs. One of his employees left to find another job. Even with the shutdown over — for now — Leja said the weather may complicate his plan to reopen the cafe this week. He said the building may be closed on Wednesday and Thursday because of frigid temperatures expected to hit the region midweek.

“I guess because of the roller coaster that I’ve been going through for the past month, I just kind of take it day by day,” Leja said.

Odette Yousef is a reporter on WBEZ’s Race, Class and Communities desk. Follow her @oyousef.