Scores of federal workers and their allies in other labor organizations rallied in downtown Chicago’s Federal Plaza on Thursday afternoon to demand an end to the partial government shutdown. In the coming days, many of them will be missing their first full paychecks since the shutdown began three weeks ago. Several said as their hopes dim for a resolution to the political impasse, their anxieties are rising over difficult financial decisions they’re being forced to make.

“I had a knee replacement surgery in October. I’m still in physical therapy,” said Lorie McCann, a program analyst for the Internal Revenue Service. “So I had to decide whether or not I was going to continue with my physical therapy.”

McCann said she has already cut down her physical therapy sessions, and next week, she will stop them altogether. She won’t be able to afford the $90 in weekly, out-of-pocket copayments while she has no income. 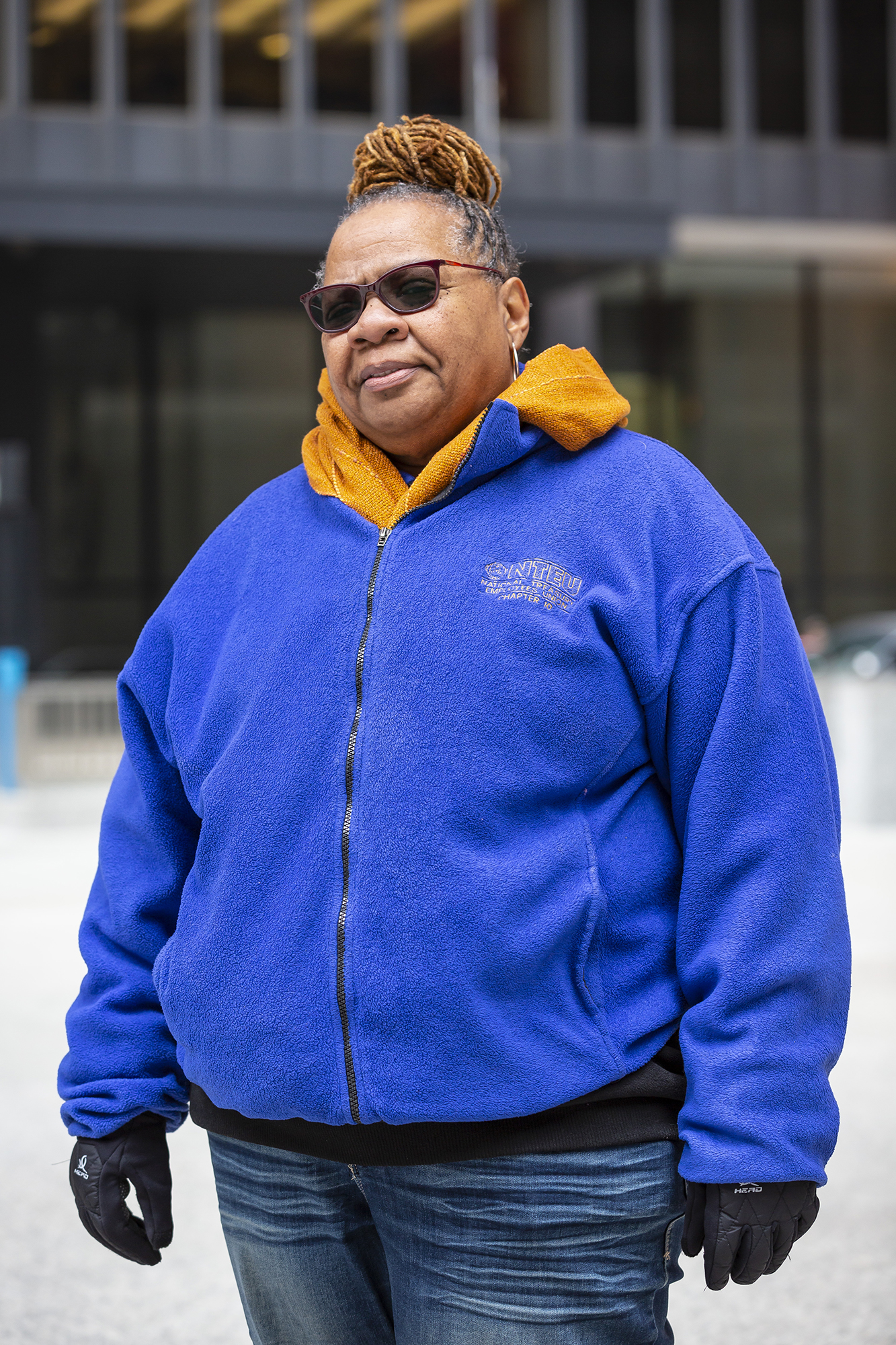 “I’m here to clear out my savings,” said Florence Cannon, who works for the U.S. Department of Agriculture. Cannon pointed to a building on one end of the plaza. “The credit union is upstairs.”

Cannon said regardless of her, or anyone else’s, opinion about whether Congress should appropriate money to build a wall along the U.S.-Mexico border, that should not hold up her work or her income.

“I think they need to open the government and then go behind the doors and bargain however they need to bargain on the border issue, separately and apart,” said Cannon. “I maintain integrity for nutrition assistance programs. That has nothing to do with the border wall.” 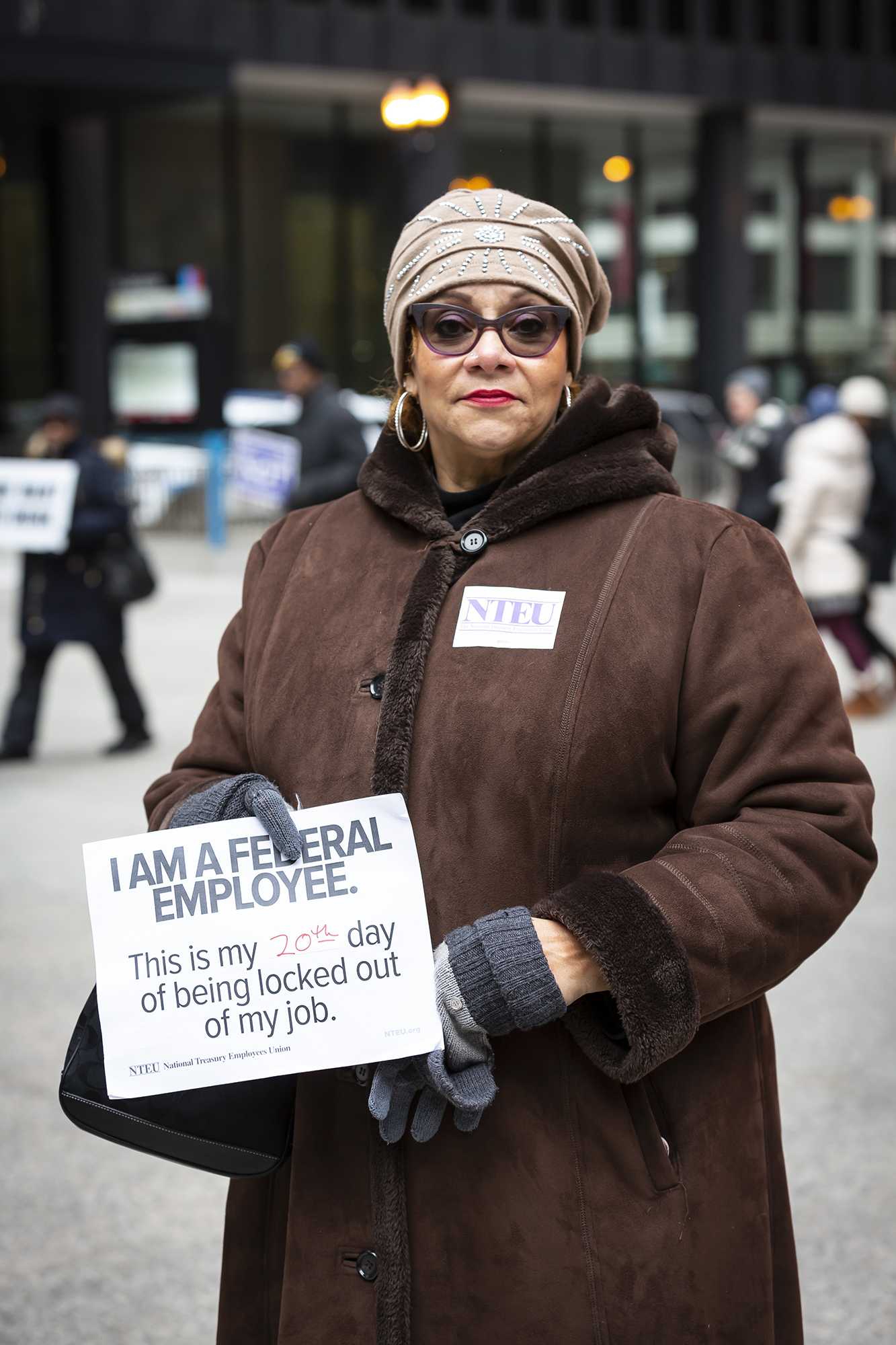 Workers said they’ve been weighing numerous questions: should they sign up for unemployment benefits? Should they look for some type of temporary work as the shutdown drags on? Should they cut down on medical expenses? Can they afford food for their pets? Will legislators and the president authorize backpay to cover their missed income when the shutdown is finally resolved?

On top of those gnawing questions, some say it’s been stressful just handling the uncertainty over when they’ll be allowed to return to work to do the public service they value. Michael Meltzer, a program specialist at the USDA, works with food retailers to help them accept Supplemental Nutrition Assistance Program (SNAP) benefits, also known as food stamps. He said he and some coworkers volunteered this week at the Greater Chicago Food Depository.

“Because that’s what we work with,” explained Meltzer. “We work with nutrition and food and we felt we had to do something to help people because we’re not able to help people normally in the way that we do every day in our jobs.”

If it drags on in the coming weeks, the shutdown may start to affect many more individuals in the Chicago area, including those who don’t work for the federal government but who rely upon the services those workers provide. 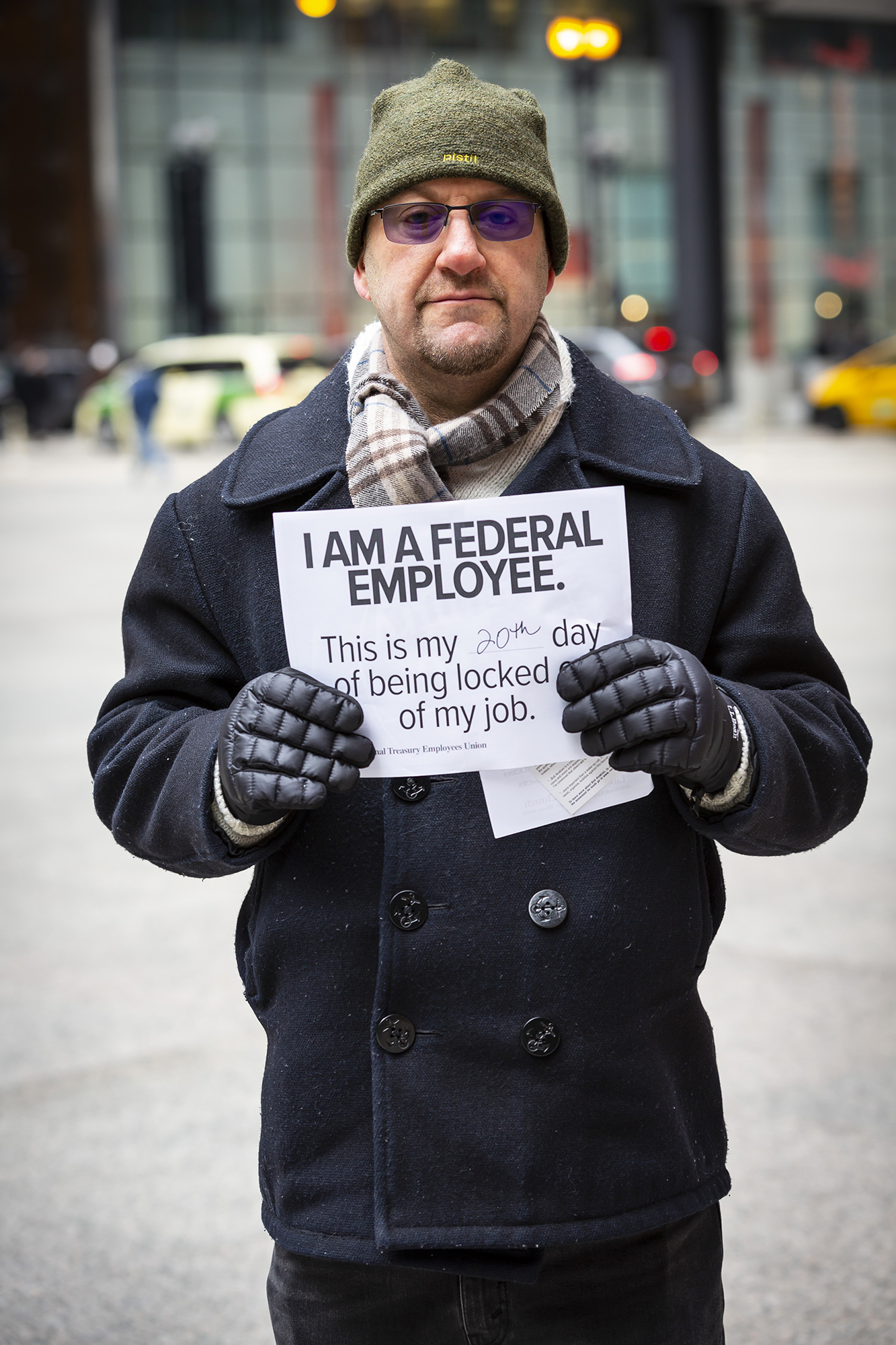 While the shutdown has affected Cannon, Meltzer, and other USDA employees who help deliver SNAP benefits to the public, the individuals who receive food assistance through that program do not have to worry immediately about an interruption to their benefits.

This week, the USDA announced that it has found a way to work with states to issue February SNAP benefits early. The Illinois Department of Human Services did not immediately respond with information about how or whether it will work with the USDA to allocate the February benefits. The latest data, from August 2018, show that more than 1.7 million Illinoisans used SNAP benefits.

It is unlikely, if SNAP is discontinued or interrupted, that charitable food donation systems in Illinois and Chicago can meet the need. Greg Trotter, spokesperson for the Greater Chicago Food Depository, said for every meal that his organization provides in Cook County, SNAP benefits provides the equivalent of eight meals.

The shutdown also affects the U.S. Department of Housing and Urban Development (HUD), which provides money to the Chicago Housing Authority (CHA). However, CHA spokesperson Molly Sullivan says that the agency has two months of operating reserves on hand. As a result, Sullivan said there is no immediate impact to the CHA’s programs or services, including Housing Choice Voucher subsidies, also known as Section 8 housing vouchers.

Impact on the federal courts

The shutdown may also start to impact cases at the U.S. District Court in Chicago.

That court can operate until Jan. 18, said Chief Judge of the Northern District of Illinois Ruben Castillo.

“We are deeply concerned that the lack of appropriation will create delays in the Court’s ability to ensure timely justice,” Castillo said in a statement.

Castillo said if Congress has not approved an appropriation or a continuing resolution by Jan. 18, that could lead to civil cases being postponed with no new civil jury trials starting.

Criminal jury trials will continue, but jurors will not be paid until an appropriation has been reached, according to Castillo. Furthermore, Castillo states that no deal also means that court employees will be required to work but won’t get paid.

“If we reach the point where paychecks are not being issued, the consequences could be very problematic. Many Court employees live paycheck to paycheck and will be forced to make extremely tough financial decisions to keep their families afloat,” Castillo states. “The morale of our Court workforce suffers when public servants and their livelihoods become hostage to political talks.” 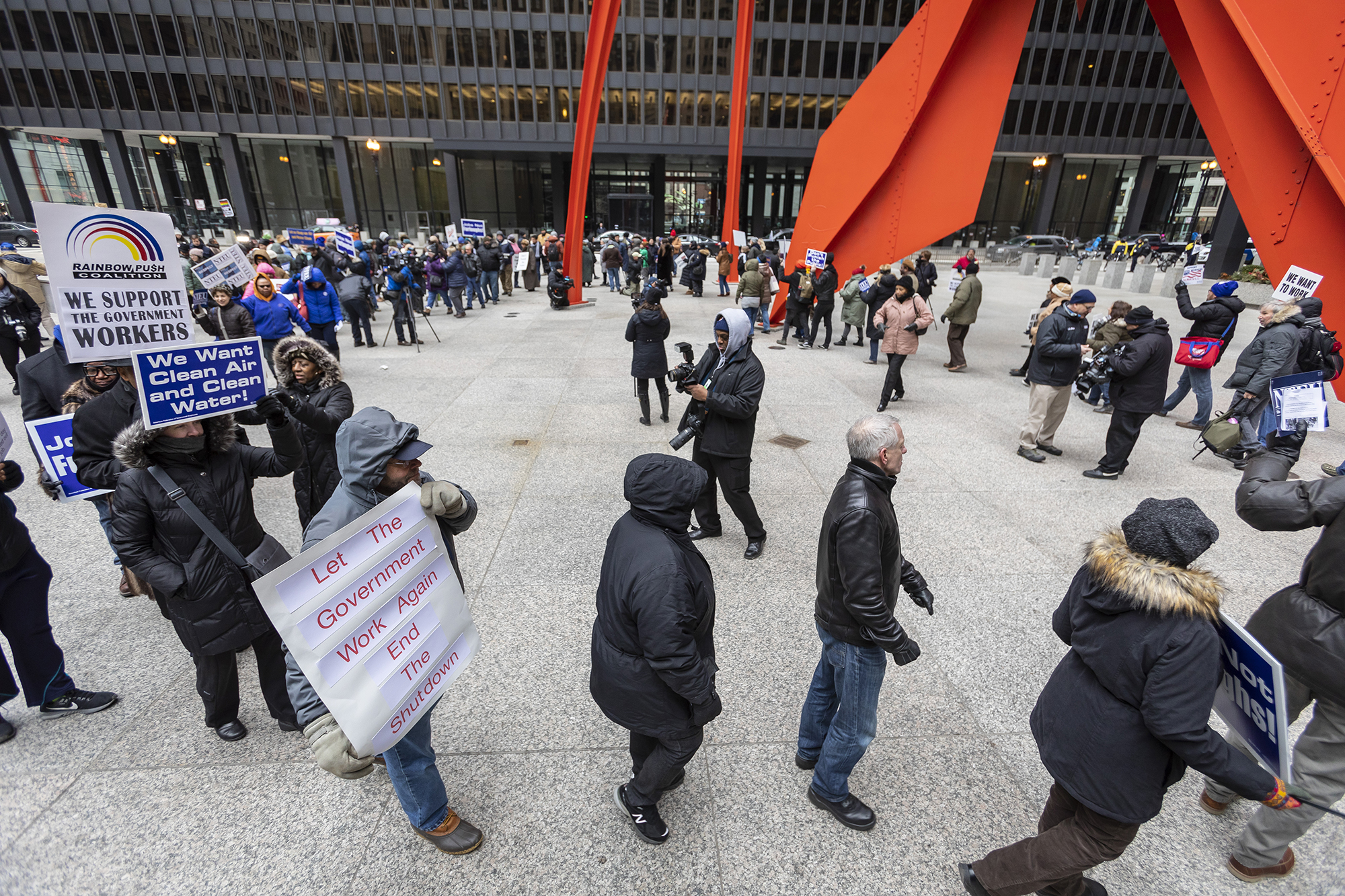 Impact to the environment

The partial shutdown is also affecting the monitoring of contaminated sites by the U.S. Environmental Protection Agency.Nicole Cantello, attorney with the EPA and chief steward for the American Federation of Government Employees (AFGE) Local 704 in Chicago, says only a handful of EPA workers are on the job.‘We have about five people in the region itself holding down any emergency issues that come in, if there’s like a train-car derailment was to happen,” Cantello said. “Everyone else if furloughed. They are not working.” One of them is Local 704’s president Michael Mikulka. “A lot of our employees are really worried about it because they are living really close to the vest on expenditures that they count on their paychecks every two weeks. Some people have it down to the nickel in terms of where all their money goes,” Mikulka said. “Everyone wants to work. We all started working at EPA because we believe in the mission: protect human health and the environment. We’re feeling like we’re being held as political hostages of the administration.”

In an effort to help those who are feeling the pinch of not getting paid because of the partial government shutdown, some are offering federal workers a break on at least a couple of things.

During the shutdown, Chicago’s Adler Planetarium is offering any federal government employee free general admission for up to two people.

And Brent Brashier is offering a free meal to any federal government employee at his Doc’s Smokehouse BBQ restaurants in southwest suburban Mokena, in Dyer, Indiana, and in Milwaukee, Wisconsin.

Brashier didn’t realize that one of his most loyal customers works as a TSA agent at Midway Airport.
Since the agent, who lives in Northwest Indiana, isn’t getting paid due to the shutdown. Brashier decided to help.
“There’s a lot of people in our community that are hurting over this. This is something we can do to lend a helping hand,” Brashier said. “If you’re not getting paid, probably one of the first things that get cut out is eating barbecue and we don’t want anybody to go without barbecue.”