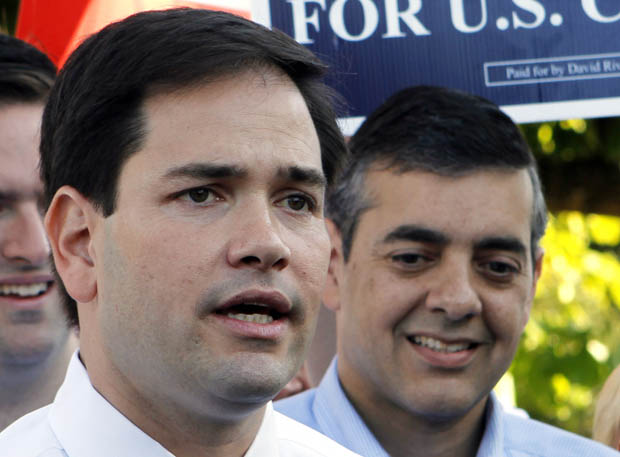 Paul Ryan may not have provided much of a bump to Mitt Romney’s presidential campaign anywhere but in Wisconsin, but as the headlines popped up in South Florida late Wednesday, you know he’s gotta be feeling some relief that he didn’t go with Sen. Marco Rubio.

“Fueled with $43,000 in secret money, Republican Rep. David Rivera helped run a shadow campaign that might have broken federal laws in last week’s Democratic primary against his political nemesis Joe Garcia, according to campaign sources and finance records.”

That’s right: It appears that Rivera — for whom Rubio held a fundraiser as late as May 16 of this year, and with whom he co-owned a house that went into foreclosure — actually set up a sham Dem primary opponent to Garcia. Garcia is a former director of the Cuban-American National Foundation and an Obama appointee to the department of Energy whom Rivera, naturally, accuses of being a "henchman" for Havana.

By late Wednesday, The Herald had a front page story announcing that Rivera and his fake Dem were both the targets of Miami-Dade and federal investigations.

Think this is Rivera’s first blush with prosecutorial curiosity? Oh no, my friends, no. Back in 2002, when he was running for the state legislature, Rivera was investigated for personally running a truck full of opposition flyers off the highway so that it couldn’t make its postal deadline.

And then there was the mess with the U.S. Agency for International Development. From 2003 to 2009, Rivera claimed his income consisted of his government salary and USAID. Except that when asked, USAID claimed they’d never even heard of him. In the end, though, Rivera amended his financial disclosure, leaving the mystery of his prior claims — they were more like boasts — unresolved.

Just last April, a Miami-Dade investigation into Rivera’s finances was finally closed (though federal and IRS investigations continue). No charges were filed — though more than 50 were considered — because of statutes of limitations. The prosecutors concluded that “we have been confronted with the fact that an elected official over a period of many years may essentially live off a combination of contributions made in support of public office candidacies, and indirect payments made as consideration for efforts as a political strategist while avoiding penal sanction.”

The Herald’s story back then had a fine lead: “Why did an obscure Republican organization pay $25,000 in 2006 to a defunct company founded by Rivera’s mother? Why did a political consultant with close ties to Rivera receive another $25,000 on the very same day? And where did the money come from in the first place? Further adding to the mystery: The Republican Party of Florida reportedly made a $50,000 payment to a Central Florida nonprofit group — money the group never received — on the same day the payments went to Rivera’s mother and consultant. Are the payments connected?”

What we do know is that Rivera mingled personal, government and campaign accounts, lent himself money, transferred a whole lot of cash between himself and family members, and, apparently, didn’t learn any lessons. You'd think with investigations about prior acts still hanging over his head that he'd behave a little differently during his current campagn aganst Garcia. You'd think he might consider that interferring in the Democratic primary might look bad, might get him in trouble, might finally put him in the slammer.

Besides just embarrassment, the problem for Rubio is that Rivera’s imaginary (and cachet) career with USAID sounds similar to his imaginary (and very cachet) exile biography. And Rivera’s easy way with personal, campaign and government cash echoes Rubio’s own problems intermingling party and personal finances.

This new scandal, which falls right smack in the middle of a viciously personal election, will continue to generate headlines about Rivera, and by defalt about Rubio, for months to come.

And for Romney, who prides himself on being personally clean, and whose entire career is based on keen money management, this kind of carelessness would have been more than embarrassing: It would have been humiliating.