It’s hard to imagine why anyone would straight up abandon a perfectly good bike.

Across Chicago, you can see these orphans shackled to signposts or bike racks, unclaimed for months, sometimes years at a time. Eventually, scavengers pick off the parts and these bikes turn into a pile of broken-down rust.

Curious City questioner Aaron Dozeman sees orphaned bikes all the time while he runs along the city’s lakefront. He wants to know: What happens to abandoned bikes and bike parts that are locked to racks and signposts throughout the city?

After digging into this a while, there are two takeaways. On the bummer note: Many of the bikes end up disappearing from the streets of Chicago, like lost souls wandering through bike purgatory.

But there is a brighter side: Ultimately, some of these bikes find a permanent home, sometimes helping a worthy cause.

Aaron had a hunch the city helps take care of these neglected bikes, and he’s right. You can call 311, or the Chicago Department of Transportation has an open source map where anyone can report an abandoned bike. You enter the bike’s location, a short description and, if you want, a picture. 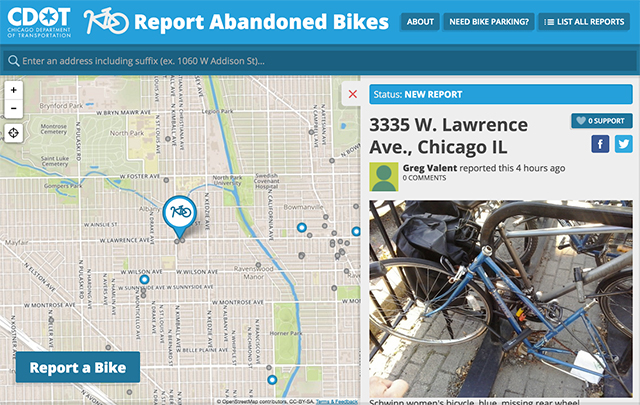 Courtesy of Chicago Department of Transportation

Then Kathleen Murphy, CDOT’s bike parking program coordinator, checks out the claim and judges whether the bike fits the abandoned criteria:

“Most of the judgement comes from having done this so long,” says Murphy, who’s been with CDOT since 2012. “If the chain is completely rusted, that seems to be a pretty good sign it hasn’t been used in a while. If it’s missing parts, has spiderwebs on it or the tires are under-inflated you can pretty much tell it’s been sitting out for a while.”

If the bike meets the criteria, Murphy puts a paper tag on it and gives the owner seven days to pick it up. They’ve tagged 781 bikes since June 2014. If an abandoned bike remains there for a week, CDOT’s construction department clips the lock and stores it in a warehouse on the corner of Ashland Avenue and Pershing Road for a least one month.

The Lakeview community area had the most tagged bikes, while areas like Jefferson Park, Armour Square and Englewood had bikes reported, but never tagged. What’s the difference? Well, if a bike is wrongfully tagged the owner can always remove it and the bike won’t get clipped. In other cases, the tag’s taken as an excuse to scavenge parts off the bike. (That’s illegal, by the way.)

Orphaned bikes that keep their tags are clipped and then donated to the bike-equivalent of foster care.

Keep it, scrap it, or ship it

At a warehouse-shop on the corner of W. 24th Place and S. Western Ave., piles of forgotten bicycles climb toward the ceiling. New bikes, rusty bikes, children’s bikes and tandem bikes are all jammed in an enormous loading dock. At that point they become the responsibility of Working Bikes, a nonprofit that prides itself on rescuing discarded bicycles and redistributing them. The group’s twelve staffers and dozens of volunteers believe bicycles are tools of empowerment.

Working Bikes manager Paul Fitzgerald is a key player in this process. He deals with inventory, works with local and overseas donation partners and mans the shop’s storefront. He also greets the abandoned bikes the city donates to the organization.

Fitzgerald says the city delivers between 40 and 80 bicycles approximately four times each year. The abandoned bikes don’t make up a huge number of Working Bikes’ total rescued bike stock. Last year, the group took in a little more than 9,200 bicycles, but only about 3 percent came from the city.

Working Bikes staff combs through every pile of spokes, pedals, handlebars and frames to find bikes that can be salvaged. Unfortunately, Fitzgerald says, most of the bikes never make it back to the road — at least not in their entirety.

“The abandoned stuff is, more often than not, going to be parts. And a certain percentage is sadly going to be scrap metal,” Fitzgerald says.

The key thing Working Bikes looks at is rust; if a bike’s too rusty, it goes to the scrapyard. Fitzgerald says about 40 percent of the bikes they get from the city go that route. But if it’s not scrapped, it meets one of three fates. 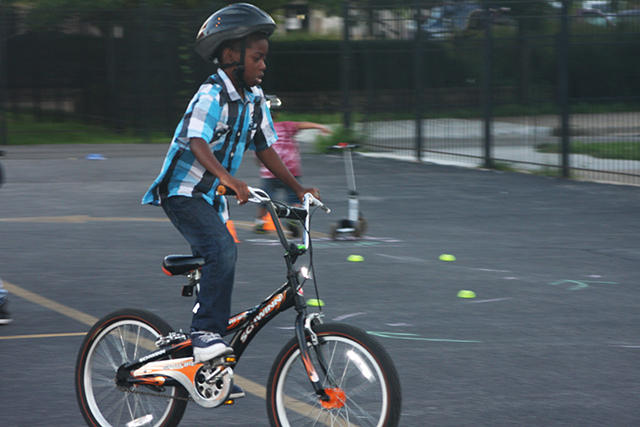 Courtesy Working Bikes
This rider snagged new wheels at an event in Auburn-Gresham, when Working Bikes gave away 108 bicycles.

In 2015, Working Bikes received more than 9,000 donated bikes that had once been abandoned. Out of those, 851 went back onto Chicago roads. Sometimes, Fitzgerald says, these bikes need quite a bit of love. But after Working Bikes volunteers fix them up, they’re donated to local organizations that work with youth, homeless people in transition and resettled refugees. Working Bikes also runs a program called Cycle of Peace/Cycle of Power, which provides bikes to people who want to cycle as their main form of transportation but can’t afford a bicycle. 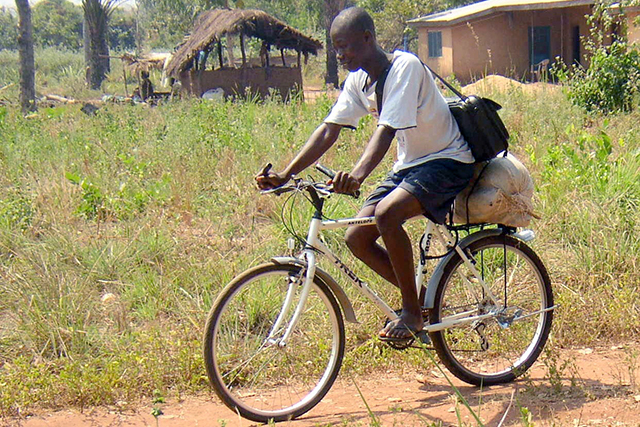 Working Bikes also ships thousands of bikes to nonprofits across Latin America and Africa. Those nonprofits — such as the Village Bicycle Project in Ghana and Maya Pedal in Guatemala — add fresh parts and give them to people in need. Fitzgerald says mountain bikes are good candidates for overseas donations because many of the recipient countries don’t have paved roads. 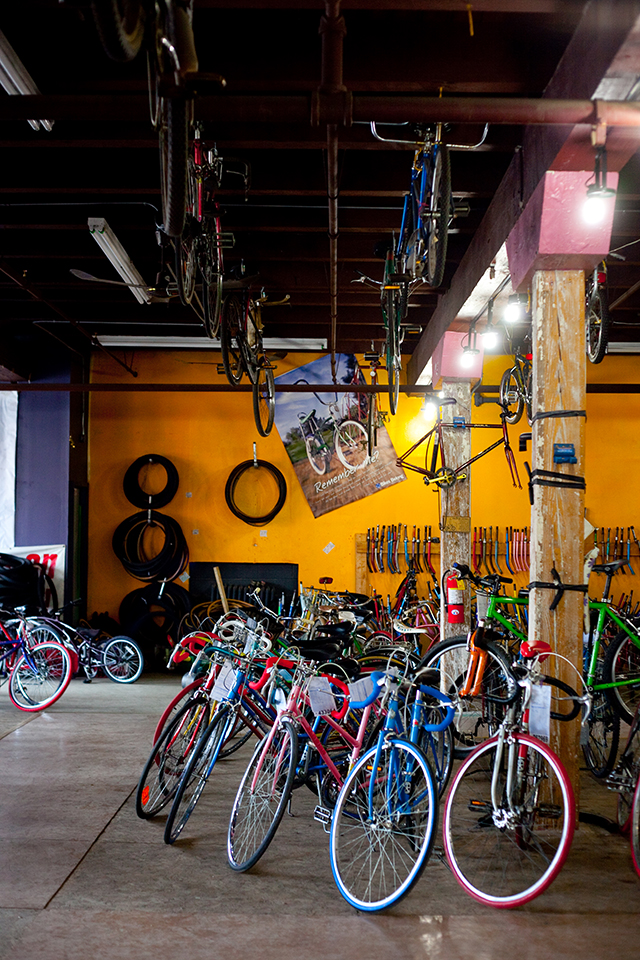 Logan Jaffe/WBEZ
Fitzgerald says Working Bikes is the only shop in the city to accept bikes collected by the city, mostly because it has room to handle them

If a bike doesn’t require much elbow grease, it gets tuned up and resold in the Working Bikes storefront. “It’s how we keep the lights on,” Fitzgerald says. Some bikes fetch as little as $60, while others can be as pricey as $1,200.

Fitzgerald’s learned not to dwell on the amount of unclaimed bicycles Working Bikes receives.

“Every time I think I find the best way to get them out in the world, I am stunned at how many more we have,” he says.

Once he and his team fix up one bike, it’s time to focus on the next. The work never stops, especially when it comes to kids’ bikes. 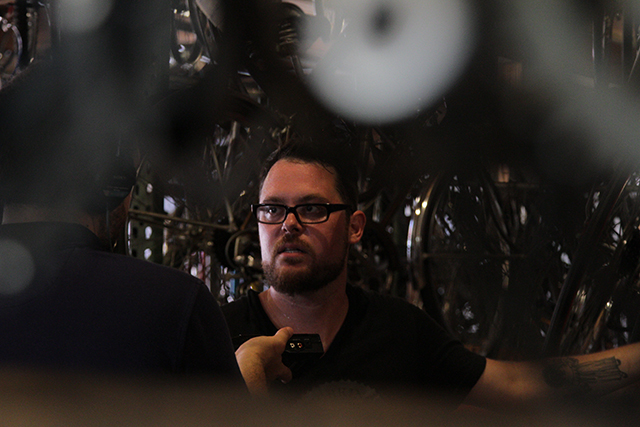 Fitzgerald says he’s proud that Working Bikes tries to use nearly every part of a bike, but he can point to an ongoing frustration. Sometimes the group receives a bike from the city’s recovery program only to have it return to the Working Bikes warehouse. He knows this because every bike the group rehabs goes out into the wild with a Working Bikes sticker on its frame. It makes them identifiable when you’re out on the street or, in Paul’s case, when the bike is abandoned again and returns to the shop. The most stickers he’s seen on a bike is two, before slapping on a third.

“We try to fix them up as quickly as possible, but it’s like raking leaves on a windy day,” he says. 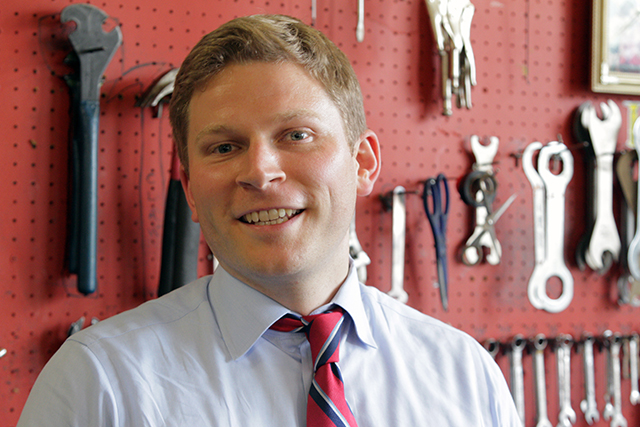 Aaron Dozeman is an Assistant Attorney General at the Illinois Attorney General’s Office. He lives in Chicago’s Old Town neighborhood and thought of his question while running up and down the Lakefront Trail.

Aaron rides a beat-up bike to get around everyone once in awhile. He’s not particularly bummed by the number of abandoned bikes he sees; in fact, he understands the abandoner mentality, and imagines he would leave his beat-up bike behind in the right situation.

Aaron accompanied Curious City during a visit to Working Bikes. He says before he saw the shop, he envisioned a process where the city picks up abandoned bikes and anyone could come and claim them. He appreciates that we live in a privileged society where local government provides this service.

“It’s really nice that they do that. I’m sure they don’t have to,” he says. “It’s probably extra time, extra labor, extra equipment, extra men. But it’s nice to know our city values that.”

But now that he knows abandoned bikes often turn out being abandoned again, he can’t contain his cynicism: “It’s nice to know that perhaps someday it will have a second life ... to be abandoned again.”

Marc Filippino is the intern at Curious City. Follow him @mfilippino.