In prison, Brian Nelson lived in solitary confinement. That meant 23 hours a day in a small cell. No human contact, except with guards — for 12 years straight.

Then, his prison sentence for murder was over. One moment he was locked down. The next, he was free.

NPR and The Marshall Project, an online journalism group that focuses on the criminal justice system, investigated the release of tens of thousands of prisoners from solitary confinement to find out how many prisoners, like Nelson, go straight from solitary to the streets.

What was stunning is that most prison systems say they have no idea.

The Marshall Project and NPR surveyed all 50 states. About half reported they don't keep track or could not provide numbers of which inmates go straight home from solitary. And a recent audit for the federal Bureau of Prisons said it doesn't keep numbers, either.

But our tally from the 24 states that say they count shows that last year, at least 10,000 inmates came straight out of solitary.

Yet inmates released from solitary often need the most help — and get the least.

In solitary, they're cut off from things that help with re-entry. There are no education classes, no job training; and when they are released, they often get less supervision than other prisoners.

When Nelson's mother picked him up at the distant supermax prison in Tamms, Ill., he told her how he was given a television during his last year of solitary and kept seeing ads for a fast-food ice cream.

On the drive home, they stopped for a Blizzard at a Dairy Queen.

"And I'm standing there and a guy walked behind me. And I was not used to people being that close to me. And I started cussing. I turned around, I'm ready to fight because I thought I don't know if he's going to attack me," Nelson recalls. "I have prison mentality in my mind. And then I looked up and saw my mom crying, like 'Oh my God, what have they done to him?' You know, because I couldn't handle being around people."

That was five years ago. It's still hard for Nelson, 50, to be around people. 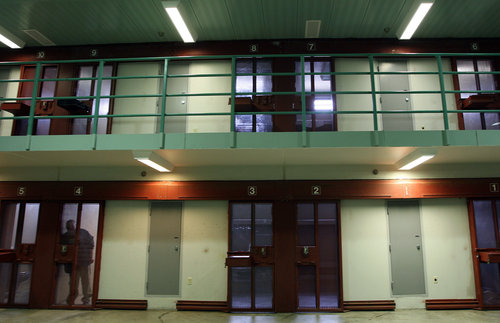 On Monday, a federal judge in Louisiana ordered the release of a man thought to have been in solitary confinement longer than any other prisoner. Albert Woodfox, 68, went into solitary in 1972 after being charged in the death of a prison guard that year. The Louisiana attorney general's office announced it would appeal the ruling, seeking to keep Woodfox in prison.

That came right after reports that 22-year-old Kalief Browder had died last weekend by suicide. He was 16 when he was arrested on suspicion of stealing a backpack, a charge he denied. Browder spent nearly three years on Rikers Island, New York City's large jail complex, awaiting trial. Two of those years were spent in solitary. The charges against him were dropped and he returned home.

Last October, Browder described to a New Yorker writer how he struggled during long stretches in solitary confinement and still suffered once he was out of jail. He had attempted to take his life several times while he was behind bars and again once he was released. Browder's story led New York, last December, to end the use of solitary for 16- and 17-year-olds, noting that the practice often caused mental illness.

In Chicago, Nelson is now a paralegal and works as a prisoner's advocate at the Uptown People's Law Center. But he still thinks about the inmates he knew during his 28 years in prison.

"To me, it's therapy," he says. "Because I have survivor's guilt. I left some good friends behind in solitary that are still there." 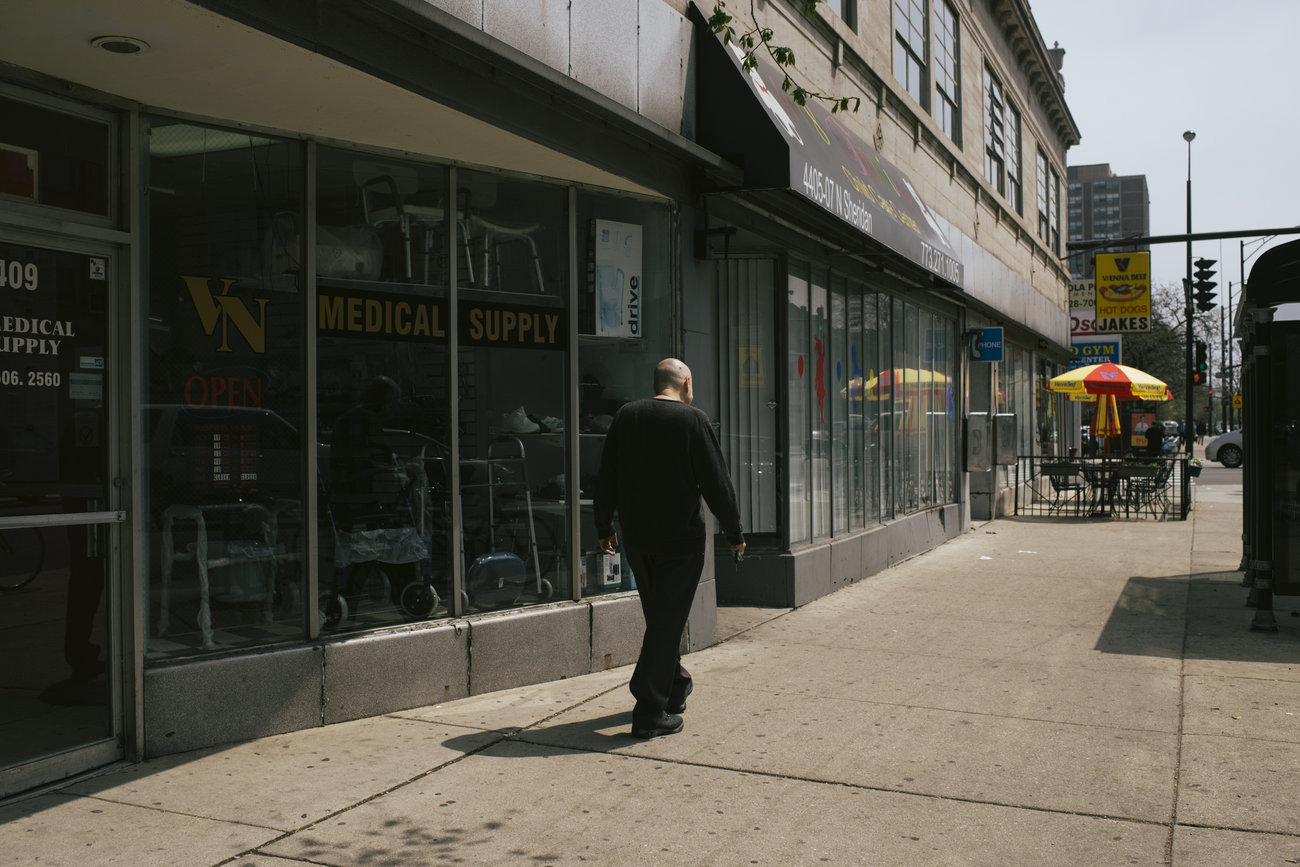 The Department of Justice estimates that about 80,000 prisoners in the U.S. are in solitary confinement. The system drastically expanded in the past 30 years as the U.S. prison population grew. Corrections officials built supermax prisons and added other new programs to isolate the inmates who were considered the most dangerous.

"The United States is unique and this is a relatively new experiment," says Alan Mills, who is Nelson's boss at the Uptown People's Law Center. "And now we're dealing with people who have spent a decade in solitary and are getting out. Mental health professionals don't know how to deal with it. And don't have treatment for it yet. It's a brand new world and unfortunately it's one that we as a society have created for ourselves."

Mills says, at the least, prisons need to take inmates out of solitary months before they leave prison and give them mental health treatment, job training and other help to get them ready to go back home.

A few states, and the federal prison system, have started doing that.

Unlike most prisoners who are given parole when they are released, inmates in solitary are less likely to get supervision. That's because they "max out" their sentence and fall outside the parole system.

That's clear in data several states provided to The Marshall Project and NPR. For example, in Texas, only 14 percent of inmates in the general prison population are released without supervision. But for those who are home from solitary confinement, that number is 63

"I went from solitary confinement straight to my Mom's," Nelson says.

A month before Nelson was released, he says he was moved from his solitary confinement unit at the supermax prison at Tamms to another prison where he also ended up in solitary.

"No reintegration. I begged for help," he says. "Get me ready. Help me."

Nelson says he now has many problems that resulted from years of being isolated from human contact. He still has trouble being around other people; his office at the law clinic is away from the main office, in a building down the block; he sleeps only a few hours a night.

Sometimes he'll come into the office at 2 a.m. Some days, he's so nervous, he'll pick and pick at his skin, until his hands bleed.

And there are days he says he just can't work at all. Because something — maybe a letter from one of the thousands of inmates he corresponds with — triggered his nightmares of solitary. Just doing this interview drained him for days.

"I never had mental health issues before," says Nelson. "I never saw a psychiatrist. I never took psychotropic medication."

Now he needs those things to get by. He knows other men in his unit who had a harder time: the men who died by suicide, the man who mutilated his testicle.

Nelson pulls out a large cardboard box he keeps next to his office.

"This is one of the things I did to keep sane." he says.

Inside, there are more than 4,000 pages, in Nelson's handwriting, in blue ballpoint ink. He picks up Page 1. 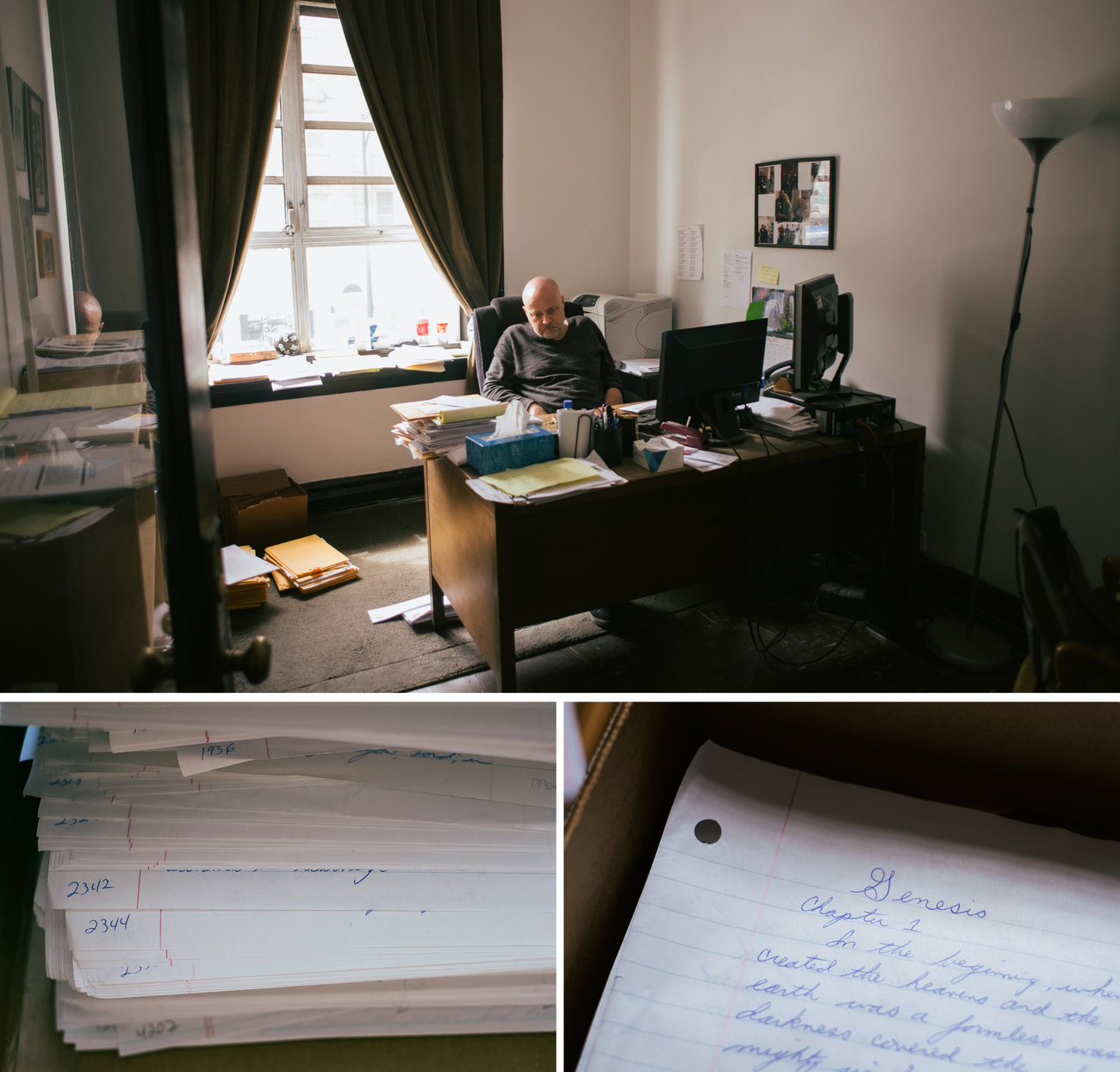 "Genesis," he says. "It took me one year, nine months and two days to copy the entire Bible. That's the Catholic Bible. Word for word, copied."

It was his Catholic faith, he says, that pulled him through the last 12 years in solitary.

Nelson was convicted of armed robbery and murder in Illinois when he was 17. He says he went along with another man selling stolen property, who did the killing.

But Nelson says no prison official explained why he was put into solitary. At the time, he'd been living in a minimum security prison in another state.

An official with the Illinois Department of Corrections says the record from that time is sealed.

Rick Raemisch also knows what solitary confinement cells are like.

He describes his: "It was very typical for a confinement cell. It was about 7 feet by 13 feet and everything, of course, was metal with a small pad to sleep on."

Raemisch is the director of corrections for the state of Colorado. Last year, he spent 20 hours in a solitary confinement cell.

His predecessor had been murdered by an ex-inmate who said he was avenging the time he'd spent in solitary. So Raemisch wanted to understand the controversy over solitary.

One of the biggest misconceptions he says — the day he went in — was that his isolation cell was going to be quiet.

"I'd been very busy at work and I thought, 'I'll just go in there and take a nap for 20 hours.' And it was loud and it was banging and screaming and actually sensory overload," he says.

The inmates, who didn't know he was there, were loud and angry. Some were psychotic. If they'd gone into solitary with any mental illness, the problem almost certainly got worse. If they didn't have a mental illness, he says, then many developed one.

"The fact of the matter is that I came out of there feeling that, that really nobody should be spending, if at all possible, any lengthy periods of time in there," Raemisch says. 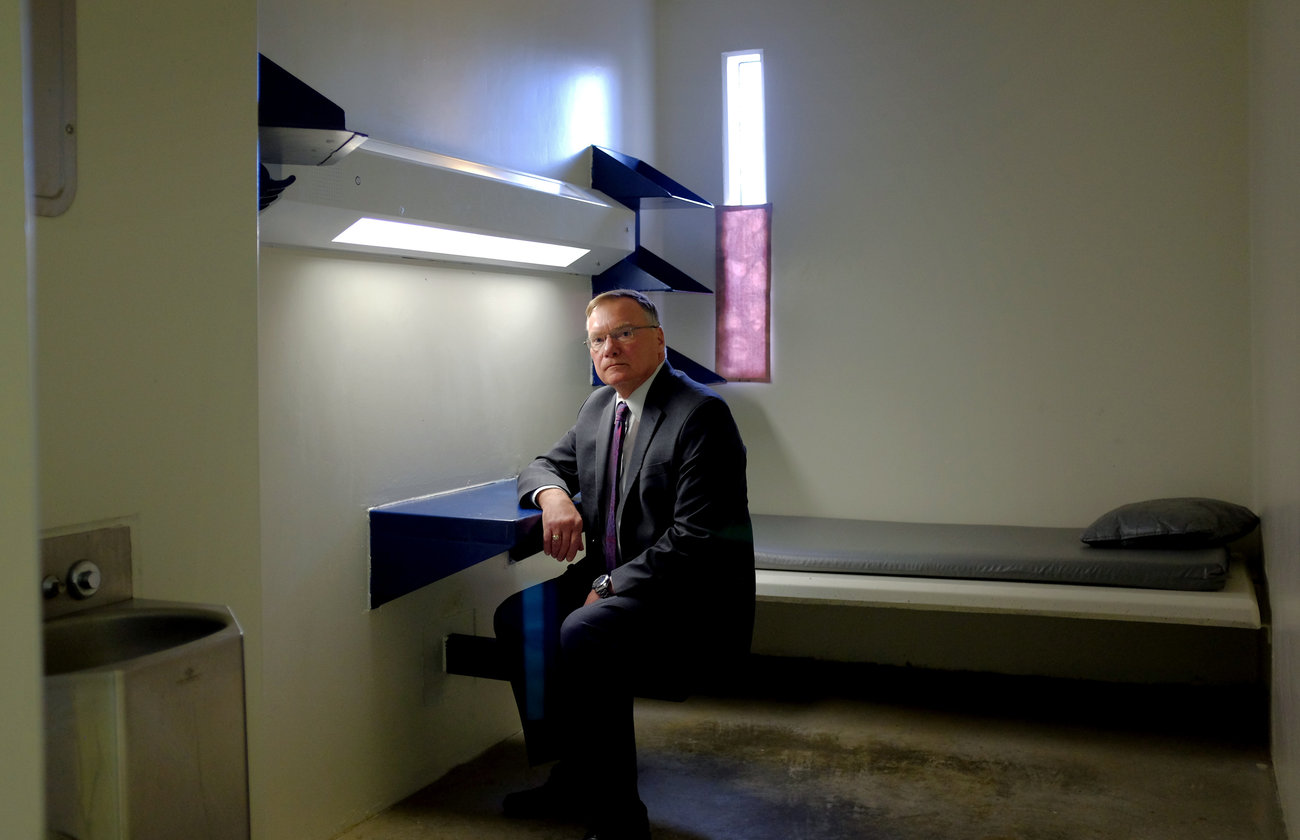 Among the reforms the corrections chief has made in Colorado: No one stays in solitary for more than a year, and no one goes in who already has a serious mental illness. (Some of this reform was actually started by Raemisch's assassinated predecessor — Tom Clements.)

One result of the new rules: Inmate-on-staff assaults are down to the lowest level in nearly a decade.

A few other states — including New York and Mississippi — have made similar reform. But most prison officials still say they need solitary confinement as a way to control violence.

In Colorado, Raemisch also changed the way prisoners are released. They used to go directly from solitary confinement to the streets.

When he first got to Colorado, he says he heard stories of how correctional officers would take an inmate being released from solitary to the bus station in handcuffs and shackles. They'd put the inmate on the bus and then take the shackles off. "And I thought," Raemisch recalls, "'My God, everybody on that bus should get up and run.'"

There have been notorious cases where prisoners came out of solitary and went on killing sprees. The one in Colorado and another in Nebraska.

But those cases are rare.

What's more common: Prisoners come out of solitary emotionally damaged. They can't work. They behave in ways that test and fray the few important relationships they have with friends and family.

Of the dozens of ex-inmates NPR and The Marshall Project found who spent extended time in solitary confinement, Nelson is one of the few who are successful and working.

But he says it's a daily struggle. There are things that center him, such as prayer, his family, sitting on the couch with his girlfriend, and her touch. He also says his work at the law office as an advocate for other prisoners helps.

"There's times out here where it's like, I don't know if I belong out here. And everybody looks at me like, 'What? You're doing great,' " he says. "No, I'm not doing great. There are days I do great, there's days I put on a face, and then there's days where people are like, 'Please go away.' "