Jerry Garcia, the guitarist/singer/songwriter/reluctant leader of the Grateful Dead and the Deadhead nation, played his last show right here in Chicago, at the “pre-spaceship” Soldier Field in July of 1995. A month later he was gone.  Since Garcia’s death, various members of the band have toured together under various names-The Other Ones, Ratdog, Phil &  Friends, The Dead, and now Furthur-each trying to capture the sound and energy of the band when “Captain Trips” was alive.  I’ve attended concerts from several of those iterations over the last 17 years, and each time I’ve walked away disappointed. The tempo was too plodding.  The riffs were too predictable.  The magic simply wasn’t there. 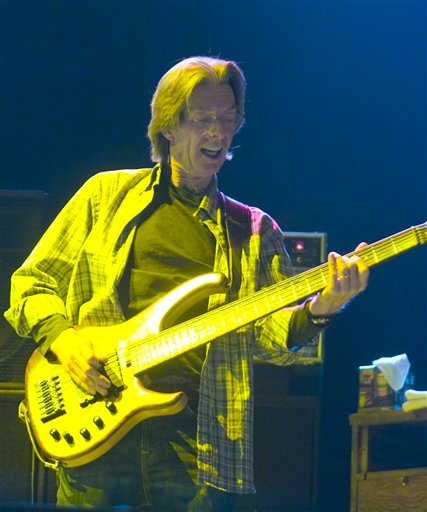 Now, let me explain something.  The Grateful Dead were plodding and predictable before Jerry died!  Even the band’s most ardent supporters couldn’t possibly argue the fact that heavy drug use, the weight of holding up a huge business juggernaut (the band employed hundreds of people), and the isolation brought on by superstardom had been eating away at Garcia’s abilities and attitude for years.  The Dead went from having outstanding  tours in the 1970’s (where it seemed like everything they played for an entire month was fresh and inspired), to great runs in the 80’s (perhaps a 2 or 3 night stand at Chicago’s Uptown Theater that was pure gold), to solid single performances, to one or two nice-but-fleeting moments within a show.

But despite the sub-par tunes, and the annoying travelling circus that followed the band (it felt like there were more people there for the party than the music-I voice a similar complaint every time I go to Wrigley Field to see the Cubs) Deadheads like me kept going back for one reason: Jerry.  If he had that twinkle in his eye, and the mood and the crowd and the venue and the band came into some kind of cosmic alignment, he was the one who could pull out something transcendent.  Something that made you think about yourself or the universe or your place in it in a totally different way.  Something life affirming.  Something that nobody had heard before and nobody will ever hear again.  A dunk from Michael Jordan.  A riff from Charlie Parker.  A moment of divine inspiration, channeled through a great artist, and he’s sharing it with you.

Which takes us to last night’s performance of Furthur at Charter One Pavilion on Northerly Island.  Out-of-town friends had descended on Chicago.  I’d seen dozens of actual Grateful Dead shows with these jokers, and I’ve been mocking their enthusiasm for the post-Jerry product for years.  While they didn’t pull me in kicking and screaming, I did yell “I’d rather be sitting on my couch in the A/C listening to the real thing!” (I probably have 1,000 hours of high-quality bootlegs covering the band’s 30+ years) several times.  For the 2 hours before the show, I was peppered with plenty of  “Dude, trust me”'s. So I took my suspicions, my past experiences, and my general negativity to the middle of the GA section of Charter One (nice place to see a show).  There I folded my arms, glowered at the stage, and dared the musicians to impress me.

I’m here to tell you….it didn’t suck.  As a matter of fact, it was actually...pretty good.  Bob Weir’s jagged, staccato playing and herky-jerky lyric delivery were perfectly summed up by my friend who said “he’s the Shatner of Rock ‘n Roll”.  And even at age 70, Phil Lesh continues to defy the role of the bass player in rock by simultaneously grounding and leading the jams. The double-drummer lineup has been pared down to a (much welcomed) single, solid drummer. A couple of backup singers have wisely been added, and they do a great job of shoring up the vocals.

The Grateful Dead were at their best when they were acting like a jazz band, with each member listening intently to the others and playing in the service of the whole. It was collective improvisation in the truest sense.  But let’s not kid ourselves.  Garcia was the first among equals, and the guy playing “the Jerry role” will become the focus of much of the music.  That role these days is filled by John Kadlecik (who spent his teens and early twenties in Palatine, Ill.), best known for his work leading Dark Star Orchestra.  DSO toured the country for a dozen years re-creating whole Grateful Dead performances (they’d pick out a specific night from, say 1968 or 1977 or 1982), virtually note for note.  He knows the tunes, the the riffs, and the sweet spots as well as just about anyone. And Kadlecik delivered the goods.  From the opening notes of "Here Comes Sunshine" to the thunderous climax of "Morning Dew," he really has a knack for sounding like Jerry when Jerry sounded like Jerry.

Like all of the guitarists filling Garcia's shoes, he might be a little “too good” for me.  He doesn’t make mistakes. One of the things that made Garcia so endearing was he liked nothing more than the challenge of painting himself into a musical corner and then figuring out how to extricate himself from said tight spot.  Most of the time he escaped, and you’d exhale along with him and shout an “atta boy!”. Sometimes he got stuck in that corner and he/we would use it as a metaphor for life-acknowledge you blew it, have a good laugh, pull up your pants, and move on.  In addition to the “perfection question”, several of the tunes could use a bit more speed.  One or two slow-churning boogies are ok over the course of the night.  The number was closer to five.  But the band put plenty of pep into chestnuts like "Mississippi Half-Step," "Cassidy," and "Passenger."  They ended the first set with a fantastic version of the Weir combo "Lost Sailor/Saint of Circumstance."

Unlike past performances I didn’t walk away muttering obscenities, swearing that I’ll stick to my bootlegs and my memories.  If I can use a foodie/restaurant metaphor: they weren't trying to be Alinea. This wasn't about moving the music in new, unrecognizable directions. This was more like going to The Original Pancake House on a Sunday morning.  You're dreaming about your order the minute you wake up, and when the food arrives, you get exactly what was swirling around in your head for the last few hours-good ole' American staples done right, maybe with a little twist.  Jerry Garcia was a unique talent and personality that can never be replaced.  Period.  But for once, instead of focusing on what this band is not, I decided to focus on what it is.  And what it is is probably the best darn Grateful Dead cover band that ever existed.