Most people would have blown up by now if they were in Dale Sveum’s shoes — the Cubs have been at the bottom of the NL Central Division most of the first half of this season. But the Cubs manager has shown restraint and kept his focus, despite plenty of obstacles in his way.

With the All-Star break in progress, it’s a perfect time to reflect on the Cubs’ rookie manager and the team's situation after the first half.

“There are times it would get to people, but [Sveum] has been great. We want to do well for him.” – pitcher Jeff Samardzija

Losses aside, players and coaches are impressed with the patience Sveum has shown and the straightforward way he’s managed his first season. According to Cubs broadcaster and former Arizona manager Bob Brenly, patience is mandatory for a manager. “I think [Sveum] knew it was going to be a struggle,” he said, “but it doesn’t take away from your competitiveness.” Even during a 12-game losing streak the Cubs manager never lost his cool. “It would have be real easy for him to blow up,” Cubs player Darwin Barney said. “[But] he gets where we are as a club and an organization.” 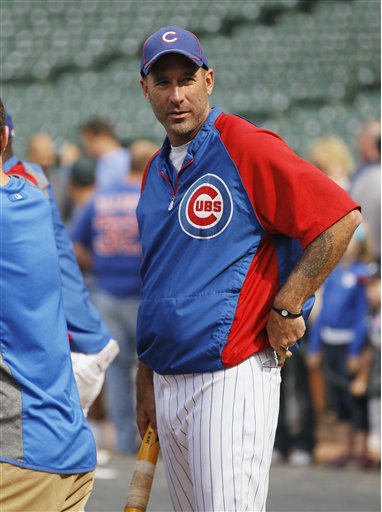 “There are some guys who thought their place with the team was secure; they are not here anymore. It’s not what you did in the past, but what you can do in the future.” – broadcaster Bob Brenly

The word “accountability” is used often when Cubs management talks about the players and the expectations given to them. All players, including Bryan LaHair, know that is a fact. “You feel everyone is in the same boat,” he said. “If you don’t do something right, he’ll let you know — and that is good for us.”

LaHair knew — when he began struggling at the plate — that he would not start every day. Coming out of spring training, the bullpen had several inexperienced pitchers; the anchors were supposed to be Kerry Wood and closer Carlos Marmol, but both players were ineffective. Eventually Wood retired, and Marmol lost his closing role. Recently, Marmol regained the confidence of Sveum — and his closing role.

The expectation of accountability was also apparent in the handling of starting pitchers Chris Vostad (acquired in the Carlos Zambrano deal), Travis Wood (part of the Sean Marshall trade) and Randy Wells, all of whom stumbled as starters. All three were sent to Triple-A Iowa and Wood has come back. Now he appears to have “turned the corner” with some good outings.

“He played the game, he knows how hard it is and he is in the trenches with us.” – third base coach Pat Listach

Sveum is a hands-on manager; during pregame workouts he's in the field, aiding in the instructions with his middle infielders. Barney, a former shortstop, has been playing second base every day, and he credited Sveum and Pat Listach for helping him. “They helped me build a lot of confidence around the bag and turning a double play,” he said. “[Sveum] personally helped me out there.” Starlin Castro has also improved in turning double plays from the shortstop position.

As a former Milwaukee Brewers hitting instructor, Sveum also advises his batters. In May, he convinced left fielder Alfonso Soriano (who was homerless at that point) to switch to a lighter bat. Since the change, Soriano has hit 15 home runs. While Soriano may not be a fan-favorite, he is a fan of Sveum and the Cubs coaching staff. They wanted Soriano to make the All-Star team, and throughout the season the Cubs manager has given genuine compliments to Soriano on his work ethic. Soriano, a Cubs veteran, returned the compliment: “He knows we are working hard. The record may not show it, but I see everyone is prepared.”

“I am not afraid to go to him to ask him about a situation. The line of communication is there and he makes it easier on everyone.” – second baseman Darwin Barney

There is no indecisiveness in the way Dale Sveum goes about his job. He is direct and pulls no punches. Before Anthony Rizzo was brought up, Sveum told Bryan LaHair he was going to play right field and would move there permanently when Rizzo arrived. It was simple and to the point.

Sveum is a “straight-shooter" in the usual pre- and post-game sessions with the media. He handled the ascension of Rizzo as well as could be expected, not wanting to put pressure on the young player but knowing the significance of this future star.

Recently, Sveum was asked repeatedly about the rookie hitting third in the lineup. Without flinching, he said, “I don’t see me changing that in the future.”

“He shows respect to all the players. Nothing is more important.” – outfielder Alfonso Soriano

From the players to the coaching staff there seems to be mutual respect, despite a losing record. First base coach Dave McKay spent 27 years with former St. Louis manager Tony LaRussa. When McKay was interviewed for his current job, he called LaRussa that night. “I told Tony I was impressed with Dale. He reminded me of [Tony]; his attention to detail and doesn’t back off of players and makes sure they do it right,” McKay said. With all the losing, McKay was looking to see if the Cubs manager would falter; he didn’t. “After those games where you expect there to be whining; he’ll come in and say, 'We have to stay positive with these guys,' " McKay said. "[Sveum] carries himself well."

Sveum has had a lot on his plate for his first season as manager: There have been several injuries to his catching corps. His best pitcher, Ryan Dempster, has been on the disabled list (he returned on Sunday) and will likely be dealt soon. His starting third baseman, Ian Stewart, is lost for the season with a wrist surgery. He moved LaHair from first to the outfield, a move that Bob Brenly thought was great “out of the box” thinking for Sveum. Of course, there is more but Sveum credits his team for always “busting their butts” no matter the circumstances.

When asked about the most difficult aspects of his job, Sveum said, “I think I learned a lot about lineups; we haven’t done well against left-handers.” He has used at least 56 different combinations. Lately though, Sveum said he sees some positive signs. “Things are falling into place for the bullpen, the lineup is looking stable and the addition of Rizzo makes a difference,” he said. The young first baseman has contributed with game-winning hits and his presence should give Starlin Castro more protection in the lineup.

After the All-Star break, it will be interesting to see what effect some possible deals will make on the club. Dempster, Matt Garza and possibly Alfonso Soriano may have new teams by the trade deadline. But that all will have to wait. In the next few days Sveum will be taking a much needed break and head home to Phoenix. “I’m doing nothing for three days,” he said. He deserves it.

On Wednesday, we'll look at the other rookie manager in town: Robin Ventura of the first place White Sox.