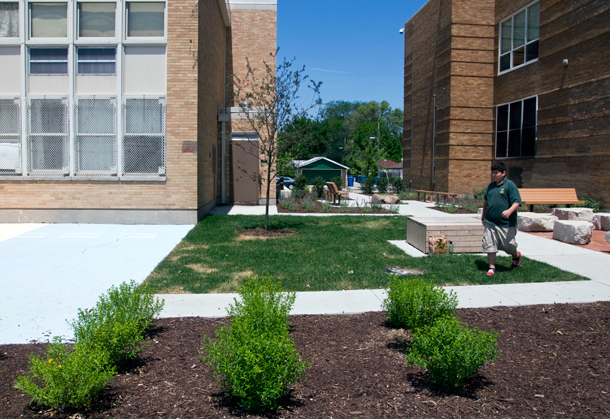 Though they occupy the same plot of land in the southwest side neighborhood of Garfield Ridge, students from two adjacent primary schools — one public, one charter — rarely meet.

Phoebe A. Hearst Fine Arts Magnet School and the Academy for Global Citizenship share a campus at 4640 S. Lamon Ave. At their closest point the buildings almost touch, with only a 3,500 square foot asphalt corridor linking the parking lot with 46th Street between them.

On Tuesday students from both schools giddily assembled to cut the ribbon on the new garden and outdoor classroom that replaced that spit of blacktop with green space.

The project is part of nonprofit conservation group Openlands’ Building School Gardens program, which has helped create 54 gardens at schools throughout the region since 2006. They began by working only on sites that already had green space, but have since received enough funding to pursue projects that flip concrete into gardens.

“A lot of kids in cities don’t have a connection to nature,” said Openlands’ Kristin LoVerde. “A place like this helps bring it to them.”

Working with Christy Webber Landscapes, “garden teams” of parents, students and faculty settled on a few key criteria for the Hearst/AGC garden. They decided it should have an outdoor classroom, a vegetable garden, trees for shade, rain barrels and native plants. The 12 raised vegetable beds, which occupy blacktop in addition to the 3,500 square foot space, have been planted with beets, carrots and greens. AGC has a pilot program focused on serving vegetables produced on site, so the students will get to enjoy the fruits of their labor.

“It’s not just science and math that you can teach in a garden,” LoVerde said. “Even just reading a book out here has an impact.”

Students from both schools moved the soil, mulched and installed some 400 plants, many of them meeting for the first time.

In the fall local art group Green Star Movement will help install murals on either side of the new garden. As the school year closed Wednesday, Openlands was on hand to help install their next project in McKinley Park.