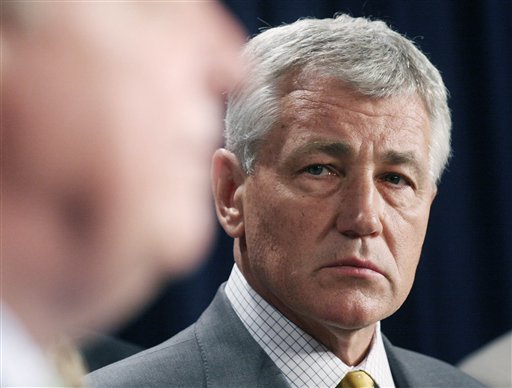 When it comes to queer stuff, Republicans never cease to amaze and amuse me.
Here in Illinois, Pat Brady, chair of the state GOP, just came out unequivocally for same sex marriage while the crazies in Congress just authorized yet more bucks to keep defending the Defense of Marriage Act in the courts — a bill whose costs already exceeds $2 million in taxpayer money.

Meanwhile, last week, the Log Cabin Republicans, the oldest gay GOP group out there, threw away $100,000 on a full page ad in the New York Times denouncing former Nebraska Sen. Chuck Hagel because he once wondered aloud if an openly gay ambassador — whom he stupidly described as “openly, aggressively gay” — was a good idea.

What’s so wrong with that? Well, for starters, Hagel hasn’t been nominated or appointed to anything. The ad calling him out is based on a rumor — a persistent one, I admit — that President Obama is considering Hagel, an honest to God maverick Republican, to lead the Pentagon. But Hagel has been pummeled so hard for once having referred to pro-Israel forces as the “Jewish lobby,” and for expressing a willingness to talk to countries such as Iran and Pakistan, that it’s unlikely that he’ll ever actually get the nod.

Hagel, however, isn’t really my concern here. What I find ridiculous is the Log Cabin assailing him for comments made 14 years ago and ignoring much more recent, and much more egregious, anti-gay rhetoric and action by Republicans who are in much greater positions of power even as I write.

This past week, for example, as they attack Hagel, they failed to even mention the move by Boehner and the GOP leadership to tie the legal defense of DOMA to House rules.

Heck, when Boehner actually authorized the initial expenditure to defend the DOMA after President Obama and his attorney general decided not to, not only did the Log Cabin boys not run ads against him, but their then director, R. Clarke Cooper, actually went on MSNBC’s “Hardball”and defended him! (Cooper, who recently stepped down, also said what would be brave for Obama was not to stop supporting DOMA but to come out and say that he was for same sex marriage ... a demand he hasn’t made of any Republicans and which Obama has since met.)

And this past election, for Pete’s sake, Log Cabin Republicans endorsed Mitt Romney for president — a man who’d signed the National Organization for Marriage’s pledge against same sex marriage!

In 2008, Log Cabin endorsed John McCain, who was against repealing Don’t Ask Don’t Tell. And he sure as hell hasn’t changed: Less than a month ago, McCain was picking up the slack for defeated Rep. Todd Akin, who’s still trying to undo DADT one way or another and proposed a bill that said: “The Armed Forces shall accommodate the conscience and sincerely held moral principles and religious beliefs of the members of the Armed Forces concerning the appropriate and inappropriate expression of human sexuality and may not use such conscience, principles, or beliefs as the basis of any adverse personnel action, discrimination, or denial of promotion, schooling, training, or assignment....”

In other words, Akin’s bill, which then became McCain’s until most — but not all — of the offensive language was removed, was trying to get the armed forces to accommodate faith-based bias against LGBTQ soldiers.

Did Log Cabin feel any sense of betrayal? Who knows, there were no ads denouncing McCain, one of the most senior and powerful Republicans in the senate.

Why Hagel? Why now? Log Cabin didn’t even take out an ad at the time of Hagel's original comment, even though they were already a well-established political organization. All Log Cabin is saying is that they did the fiscally responsible thing by getting a handful of donors to pay for the ad, costing the organization nada.

Here’s my question: Who wanted this? Hagel seems a million miles from a priority for gays of any political persuasion. For whom was Log Cabin carrying water? And if they could raise this kind of money, why not put it toward electing openly gay Republicans or lobbying?

Hagel, of course, immediately came out with an apology which everyone seems to think was, not surprisingly, a little convenient. Still, maybe Hagel has, in fact, had a change of heart about gays. Two years before his comment, the Senate passed DOMA (Hagel was for it). Every single Democrat who’s still in the senate today voted for it then — and every single one has now signed on as a co-sponsor for repeal. Why not give Hagel the benefit of the doubt?

By the way, every Republican senator serving then and now — McCain, Chuck Grassley, Mitch McConnell, Jim Inhofe — voted against it then, remains against it now, and has been spared attacks by Log Cabin.