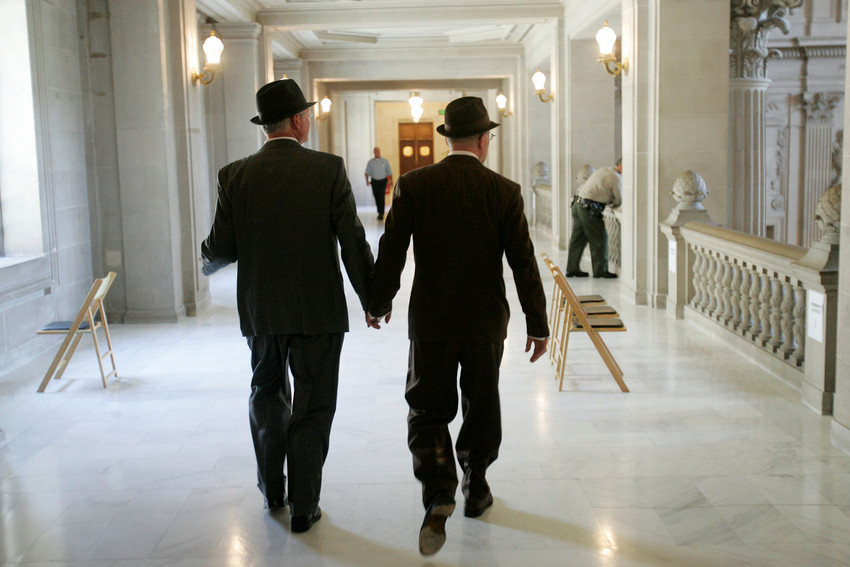 On Tuesday, Supreme Court Justice Antonin Scalia, challenged during a Q&A after a lecture about the loaded language he has sometimes used when discussing gay people, shot back, "If we cannot have moral feelings against homosexuality, can we have it against murder? Can we have it against other things?"

The polemic came in the wake of the Supreme Court’s decision to hear two cases which involve marriage rights: the odious Defense of Marriage Act and California’s Prop 8. Never mind Scalia's casual stringing of together of homosexuality and murder and how it might suggest moral equivalency — neither case involves our rights to “feelings” or even to discriminate and hate.

Scalia, who’s a likely nay vote on both cases, saw their arrival on the court’s docket way back in 2003. At that time Justice Anthony Kennedy, writing for the majority in Lawrence v. Texas, said the court’s ruling “does not involve whether the government must give formal recognition to any relationship that homosexual persons seek to enter.”

“Do not believe it,” Scalia replied. The decision, he argued, opened up the way to legalizing same sex marriage. He added that it left state laws restricting unions to opposite sex couples pretty “shaky.”

Now here we are, as Scalia predicted. Prop 8 is a California case that will mostly affect Californians. The court could decide the merits — the very legality of same-sex marriage — but it could also come down very narrowly, making it possible for California to restrict or allow same-sex marriage without spillover effects to other states.

The Defense of Marriage Act, which has tax and immigration implications as well as those of equal access, is the real red meat before the Supreme Court. It’s what really keeps state bans alive, what keeps binational couples apart and what denies queer families a host of federal benefits available to heterosexually-constructed families. The repeal of DOMA would change that.

This time around, the defense of DOMA is brought us by, among others, the Republicans from the U.S. House of Representatives. When President Obama and Attorney General Eric Holder decided in March 2011 to stop defending the law, Speaker of the House John Boehner and his gang decided to hire Paul Clement (the same guy who argued against Obamacare in front of the Supreme Court), at a cost of $2 million of taxpayer money so far. His job: to convince the high court to keep the law on the books.

The law is ugly and it looks uglier now that public opinion seems to be favoring same-sex marriage, but it wasn’t always so: DOMA was signed by Bill Clinton and supported in the U.S. senate by none other than Joe Biden.

In fact, DOMA passed 85-14, a shameful exercise in fear. Among those who stood up against the law there are a few who are still in the Senate: Both of California’s senators, Barbara Boxer and Dianne Feinstein, Hawaii’s Daniel Inouye, Massachusetts’ John Kerry, and Ron Wyden of Oregon. Not a single Republican voted to protect LGBTQ citizens.

In the House, DOMA passed 342-67, and only one Republican opposed it: Steve Gunderson of Wisconsin. In the Illinois delegation, only two Democrats voted against it: Jesse Jackson, Jr., and Luis Gutierrez. Even Bobby Rush, that great civil rights lion, voted for DOMA, as did current U.S. Sen. Dick Durbin.

But times change. Clinton says he’s sorry about DOMA, and Biden loves gays (I suspect he always did). Every single Democratic Senator who supported DOMA in 1996 now supports its repeal. Durbin and Rush are now on board.

And the Supreme Court? Well, if Lawrence v. Texas is an indication, Justices Kennedy, Ruth Bader Ginsburg and Steven Breyer – who were in the majority – should be votes to strike down DOMA. Scalia and Clarence Thomas, who were joined by William Rehnquist in this case, will likely continue their dissent.

Elena Kagan actively worked to undermine DOMA as Solicitor General and Sonia Sotomayor has a record of ruling against discrimination of LGBTQs, making them very likely supporters of a DOMA repeal.

Before joining the court, Samuel Alito had supported the right to privacy, including consensual sexual activity, but he also believes that "anti-harassment" policy violates free speech, including the right to make "derogatory" speech on "contentious issues" such as "sexual orientation." Speech and same sex marriage aren’t the same thing, of course, but part of the argument against same sex marriage, especially Scalia’s, involves the right of society to discriminate against certain behaviors and reserve certain privileges. If I were to bet, I’d say Alito joins Scalia and Thomas. Or maybe he dissents alone, but he very likely dissents.

So the count looks good for repeal, so much so that Chief Justice John Roberts’ vote might not be necessary. But I suspect that Roberts, who is keenly concerned with history and precedent, may be about to disappoint conservatives again. My suspicion is that Roberts’ hand will be felt in keeping the ruling to its narrowest possible conclusion, but that, in the end, he’ll support repeal.

It’s been a while so most folks will have forgotten, but Roberts is no stranger to gay rights. In fact, once upon a time, he volunteered, pro bono, to advise on the queer side of a gay rights case. He doesn’t talk about it, the Right tries to rationalize it, but it’s there: as a young lawyer, Roberts weighed in for gay rights.

It’s not often that the Supreme Court makes me feel optimistic. But this time, especially given everything that’s happened since Lawrence, LGBTQ Americans may finally get some real honest-to-god rights.