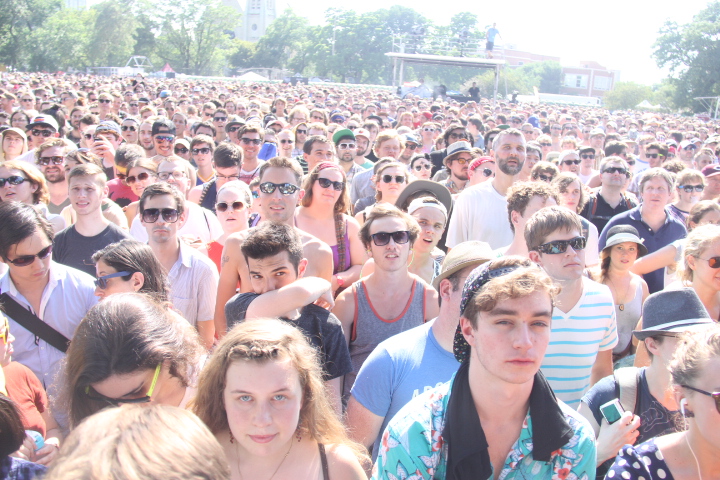 Saturday, July 20- A slightly cooler day also brought a considerably larger crowd to Union Park, with seapunks frolicking amongst bros and masses of sweaty bodies sticking together like flypaper. But hey, at least the music rocked.

Early afternoon began on a high note with White Lung, a Canadian punk rock band led by platinum blonde vocalist Mish Way. Although she lacked the blistering ferocity of say, Savages' Jehnny Beth (I'll get to her later), Way still managed to hold her own, spouting agressive feminist diatribes over her bandmates' brash and melodic wall of sound. 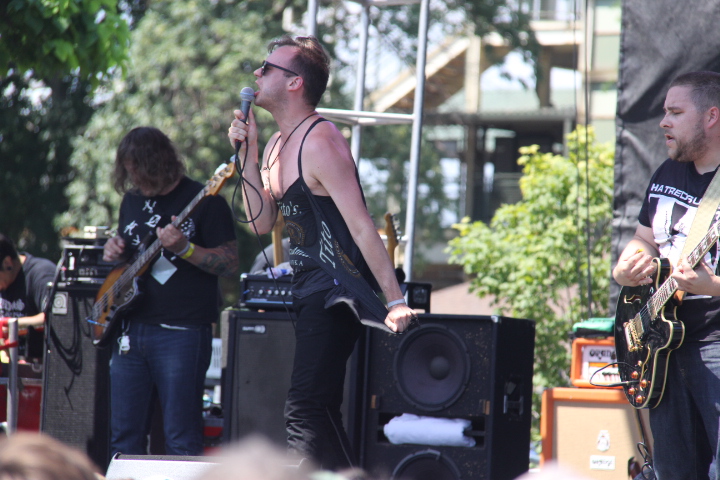 Pennsylvania noise rockers Pissed Jeans came next, with front man Matt Korvette wasting no time in lavishing his audience with plenty of sarcastic banter and shirt-ripping. "I just found out how much money we get for playing this," he hollered out to the crowd, who cheered uproariously in response, "We're getting paid to eat pink ice!"

My biggest dilemma of the day came between 3 and 5 p.m., when I had to decide between the overlapping set times of Phosphorescent and Parquet Courts, followed by Savages and Metz. I ended up choosing Parquet Courts and Savages, even though I had already seen both bands at Lincoln Hall just two nights earlier. Still, I knew deep down that they were just too good to miss. 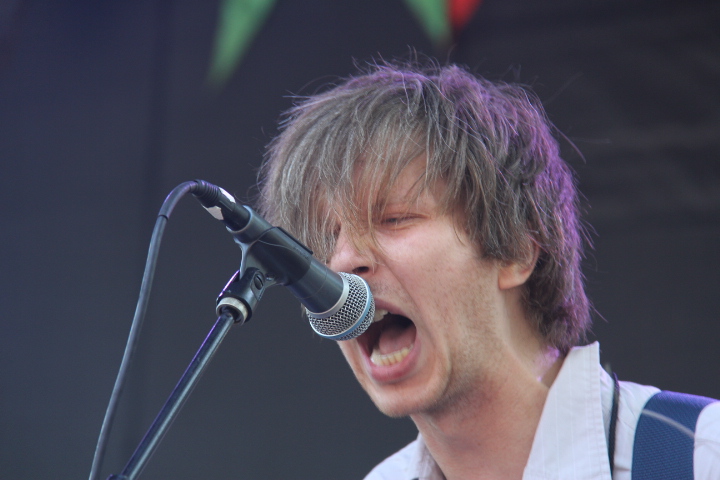 A larger than average crowd rushed towards the Blue Stage to see the much-hyped Parquet Courts in action; and as expected, the Brooklyn punk rockers did not disappoint. In fact, their freewheeling set of Light Up Gold anthems proved even more muscular and exhilarating the second time around, with every rhythmic tumble feeding off that feverish, sun-soaked energy that only an outdoor venue can provide. 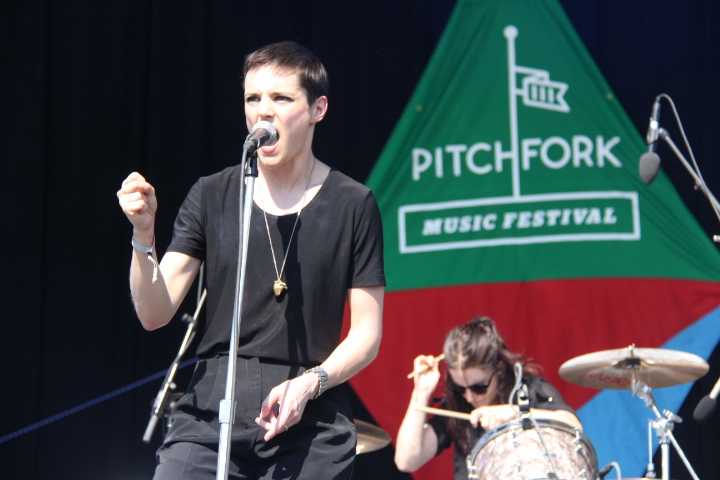 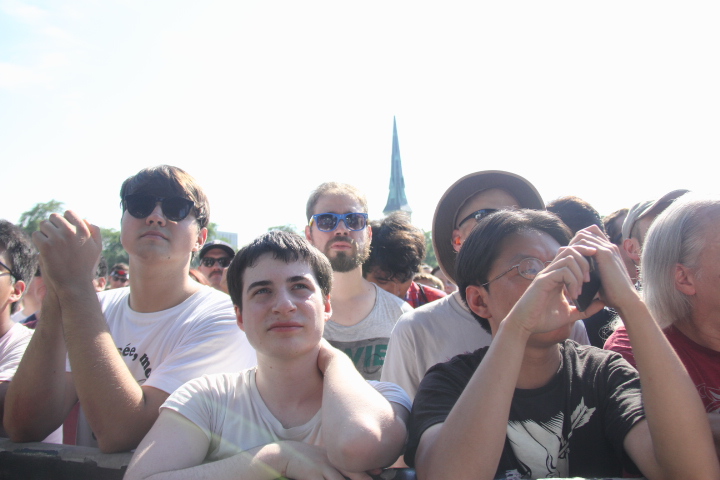 Next up: the London post-punk band Savages, which I knew going in would be a much harder pill for Pitchfork fans to swallow. Remarkably poised, yet often borderline scary in their unrelenting sonic assaults, the alpha-female quartet ripped through their debut album Silence Yourself with precision on fire. At first, the people around me appeared unnerved by the sneering, shorn-haired vocalist Jehnny Beth; but in only a few minutes time, she had them dumbstruck into submission and waiting with bated breath for what she would do next.

Still, despite generous applause and mostly undivided attention from the fun-in-the-sun Pitchfork crowd, I kept longing for Savages to cut their audience to ribbons in a much smaller, darker and more intimate setting. 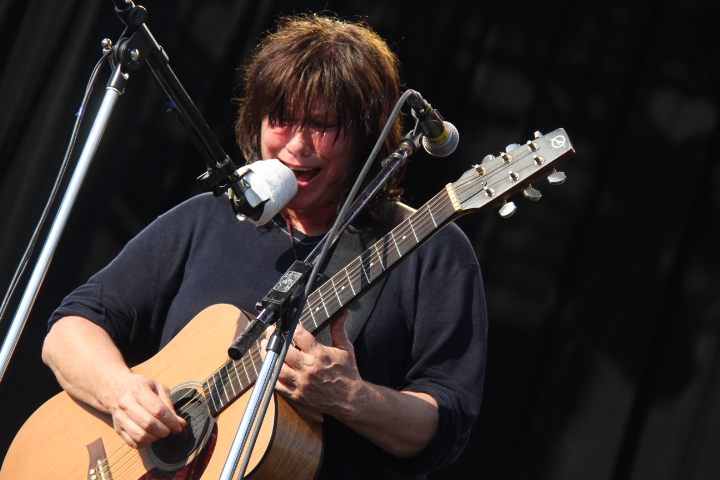 As Swans droned in the background for the next hour or so (cue Chicago Diner food and beer break), I could barely contain my excitement to hear The Breeders play Last Splash in full. But when the moment finally came, all I got was a sloppy, sometimes awkward retread of an album from 1993 that sounded much better back then. However, I must admit that catching a glimpse of Kim Deal just hanging out backstage was pretty awesome. 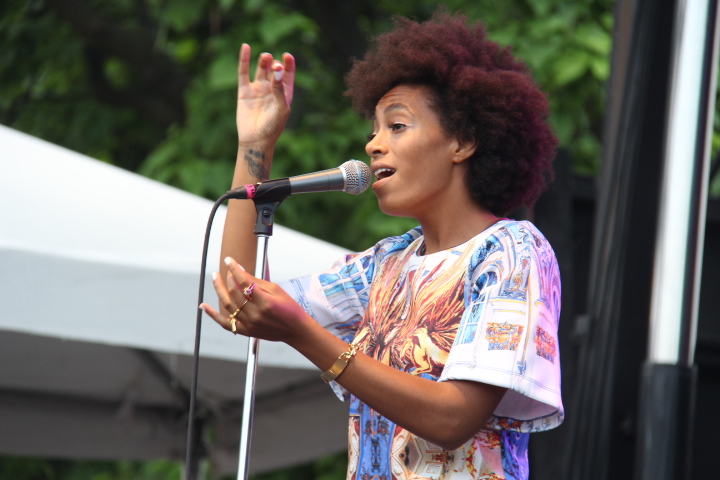 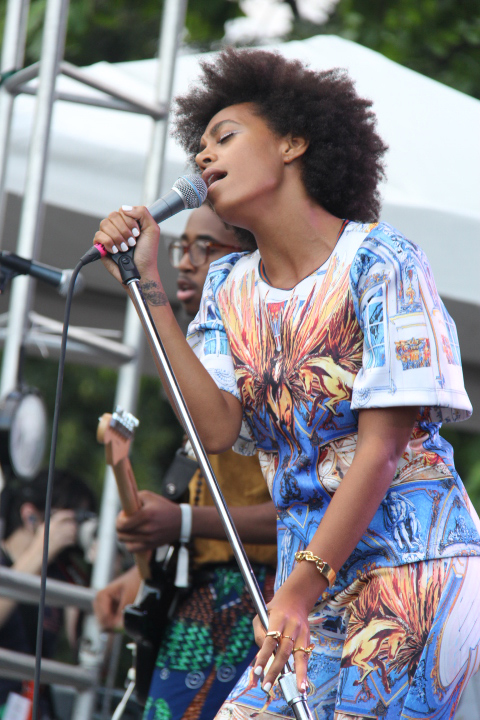 Then, in perfect harmony with the Chicago sunset and long-awaited summer night breeze, Solange effectively stepped out of her big sister Beyoncé's shadow and into the spotlight.

Solange's Pitchfork audience was, of course, overwhelmingly white and hipster; but that didn't stop her from charming even the most awkward of dancers to get their groove on.

With a silky voice so full of soul, paired with a setlist of inspired funky R&B (including a flat-out amazing cover of the Dirty Projectors' "Stillness is the Move") and a stage presence so sexy and endearing that both men and women couldn't help but fall in love at first sight, I also felt powerless to resist her.

Of all the acts that I saw and enjoyed today, this gem of a performance was by far my favorite. 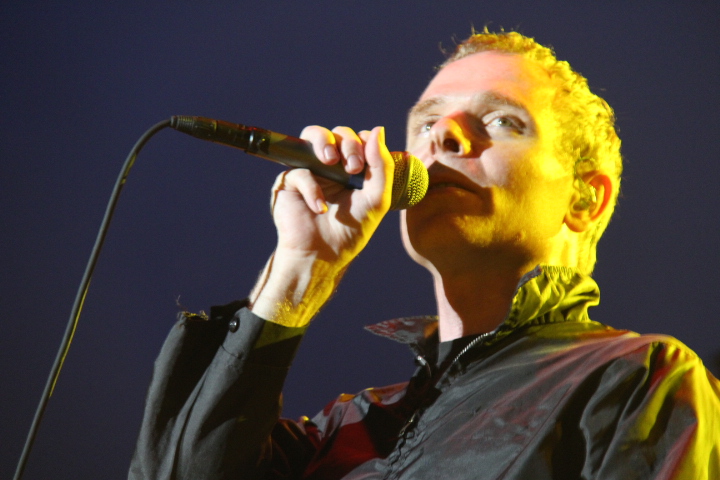 The renewed vitality conjured by Solange lasted all the way to Belle and Sebastian, the big-name headliner that suddenly had a very tough act to follow. Luckily, the Glasgow indie rockers delivered in spades, playing crisp and clean versions of classics like "I'm a Cuckoo," "The Boy with the Arab Strap" and "Get Me Away From Here I'm Dying" as still-dancing Pitchforkers twirled about in the lightly falling rain. A magical end to the night, indeed.